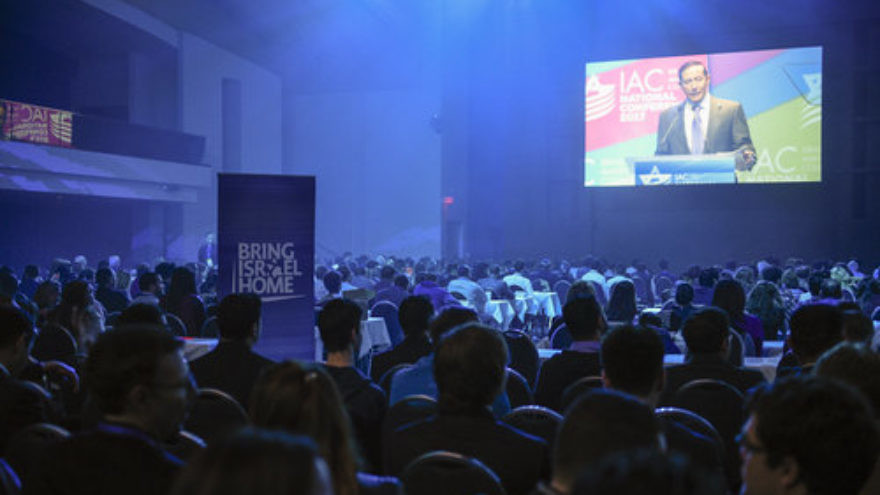 (November 20, 2017 / JNS) As Jewish communal organizations throughout the U.S. struggle to maintain membership levels and hefty annual budgets, a rapidly growing group with the energy of a well-funded Israeli start-up is challenging the Jewish communal world and its relationship to the state of Israel.

Earlier this month, the Israeli-American Council (IAC) hosted its fourth annual national conference at the Walter E. Washington Convention Center—the D.C. venue known well to many pro-Israel Jewish and Christian advocates for hosting the larger annual American Israel Public Affairs Committee (AIPAC) and Christians United for Israel (CUFI) conferences. While IAC’s 2,700 participants are dwarfed by the numbers that attend the AIPAC and CUFI gatherings, it is IAC’s rapid growth that has major Jewish organizations and philanthropists, as well as the Israeli government, taking notice.

IAC caters to the nearly 1-million-strong population of Israelis that have emigrated to the U.S.—many of them in the 1990s. It is a population that came to America primarily seeking financial opportunities, but like many immigrant communities, the majority of Israelis living in the U.S. never stopped speaking their native language, Hebrew, and never stopped loving their mother country.

For the Israeli-born co-founder and chairman of IAC, Adam Milstein, the organization seeks to take advantage of the best qualities that Israelis have to offer, and use them to strengthen the Israeli-American relationship.

“The focus of this organization and this convention is about the identity of the Israeli community living in the United States. Most of the lectures are about our identity, what is unique about us, all the benefits we are giving to the American people, to the American economy,” Milstein told JNS.org.

Regarding IAC’s rapid growth, Milstein said, “I think we have two secrets. One is our character, our ‘Israeliness,’ which means that we are very similar to the character of the people in Israel.  We have the same culture, we have the same language. We are proud Jews. We have special values of family and friendship, and we are willing to stand up for each other.”

During the past several years, members of the American Jewish community have become increasingly critical of Israeli policies. This past year, U.S. Jewry has taken issue with Israeli social and domestic policies as they relate to issues of religious observance.

In particular, the Israeli government’s insistence on only officially recognizing conversions performed by Orthodox rabbis, and the government’s unwillingness to change the access point to an egalitarian prayer section at the Western Wall plaza, have recently become wedge issues for many Jewish Americans.

“It is very important to understand. Any organization that is taking Israel, and instead of making Israel the glue is making it the wedge, they are losing everything. Basically, they are making us fight each other, and weakening the Jewish community. By doing that, they are actually increasing anti-Semitism,” Milstein said.

Referring to the open dialogue, where many Jewish organizations suggest that criticizing Israel is actually a form of support, Milstein contends, “Once you allow Israeli detractors into your big tent or into your small tent, it’s over.”

Due to this unflinching support, the IAC has been surprised to see growth also come from Jewish Americans who were not born in Israel.

“We are able now to attract a lot of Jewish Americans,” said Milstein. “We are the pro-Israel family community in the United States. We welcome anyone who is pro-Israel into our home.”

The American Jewish community has seen stagnating growth, and rampant assimilation, while the Israeli Jewish community is growing rapidly due to low intermarriage rates, exceptionally high birthrates and immigration from Jewish communities around the world—which outpaces the emigration that has made the IAC possible.

Now, just 70 years after the creation of the fledgling state of Israel, there are two Jewish strongholds with similar populations. It is a historical moment that neither the Israeli nor American Jewish communities anticipated coming so quickly, and it has arrived with some tension. Israel’s government has had a difficult time of late explaining and bridging the growing gaps between American and Israeli Jewry.

Sam Grundwerg, Israel’s consul general to Los Angeles, told JNS.org that the IAC is “ensuring that the Israel-American alliance will continue to thrive.”

Grundwerg was a participant on a panel at the IAC conference specifically geared toward bridging the gaps between Jews in Israel and the diaspora. A week later, the consulate co-hosted an event with IAC, featuring an address by Israeli President Reuven Rivlin.

Noting that the IAC “provides important programs” and “keeps the community connected with Israel,” Grundwerg said that the organization “is extremely instrumental to the Israeli-American community nationwide.”

Yet IAC is also pushing its members to participate in the existing Jewish communal structure, in the hopes that the “Israeliness” of IAC participants will positively impact their American-born neighbors.

At the annual conference’s opening plenary, IAC co-founder and CEO Shoham Nicolet told the audience, “I see the power of Israeliness all over the United States of America and in everything the IAC does. We came all the way to DC not to discuss gaps, but to go back to the basics of togetherness. We are here to demonstrate what one family looks like, which transcends religious denomination, political affiliation and nationality.”

Milstein said of the conference’s growing participation, “You can see the warmth.  Everyone you meet here, they hug you, they say, ‘It’s so great to be here.’ You don’t see this type of excitement and electricity from the Jewish American community.”