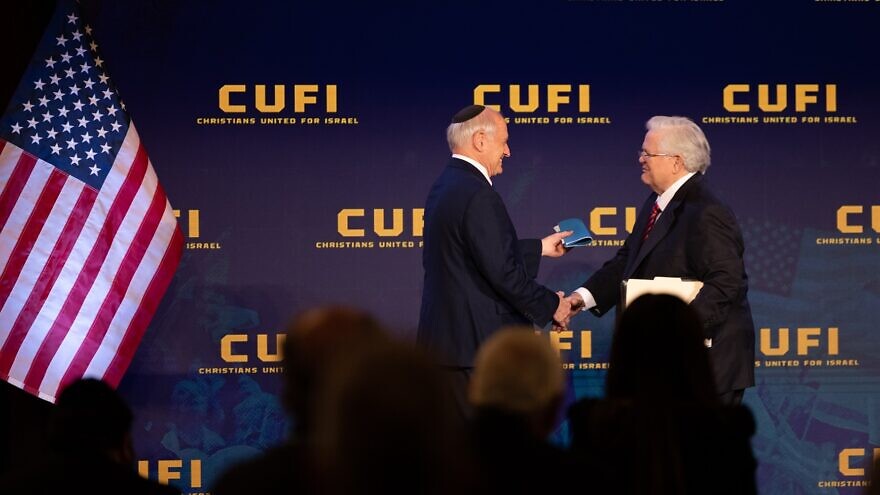 (July 26, 2021 / JNS) If day one of the Christians United for Israel 2021 summit was about honoring Israel, the next day’s focus at the organization’s annual conference held this year in Dallas was a call to action.

The more than 700 invited CUFI leaders and donors at the two-day conference on July 18-19 arrived early in the morning for the start of the marathon conference day that covered every topic from Iran, BDS and anti-Semitism among others.

Rather than the pep rally for Israel last Sunday, Monday offered attendees the nuts and bolts of the U.S.-Israel relationship, which they enthusiastically received, and set the course for the following year of activism.

Like the previous day, the proceedings began with another speech by CUFI founder Pastor John Hagee, who came onto the stage holding a bulging folder.

“I hold in my hand legal documents from 33 states that stops BDS—which is Boycott, Divestment and Sanctions—dead in its tracks in 33 states. BDS is economic anti-Semitism,” he said in a thunderous voice as he lifted the folder for the attendees to see. “Christians United for Israel is not a briefcase toting, paper shuffling, sit around the table and talk about it all day organization. We are a get-it-done group of people.

“I say again, dialogue without action is a waste of time, and I don’t dialogue really long. I want to find out what you’re going to do and then go do it.”

Hagee said that those present were leading the charge and winning the BDS fight in America.

“We will not stop until every state in the union has the policy to stop this economic anti-Semitism against the State of Israel,” Hagee said as the audience, seated at round tables with blue-and-white tablecloths in the Hyatt Regency ballroom, applauded with enthusiasm.

Hagee said that over the last year in the United States, he had seen things he never thought he would see in America. Not just the global pandemic that brought the world to its knees, he said, but the “rabid, virulent, anti-Semitism that has engulfed American society” and called for the mostly evangelical Christian audience to join Jews in combating it.

“Anti-Semitism is not just a Jewish problem. Anti-Semitism is everyone’s problem. Our Jewish neighbors cannot be left to fend off this scourge by themselves. If we do nothing, evil will thrive, and it will rule the day,” said Hagee.

Hagee called the members the “watchmen on the wall” who are never going to be silent. CUFI he said, was a one-issue organization, which is and will always remain, Israel and the protection of the Jewish people, who have the right to defend themselves, secure their borders, and enjoy the right to life liberty and the pursuit of happiness.

The speech was a call to action to the organization’s 10 million members to not remain on the sidelines and act on behalf of Israel.

“I’m sure the super-cautious are going to say, ‘Let’s dialogue,’ ” he said. “We’ve been dialoguing for 40 years. The gloves are off, we’re coming after you now!” 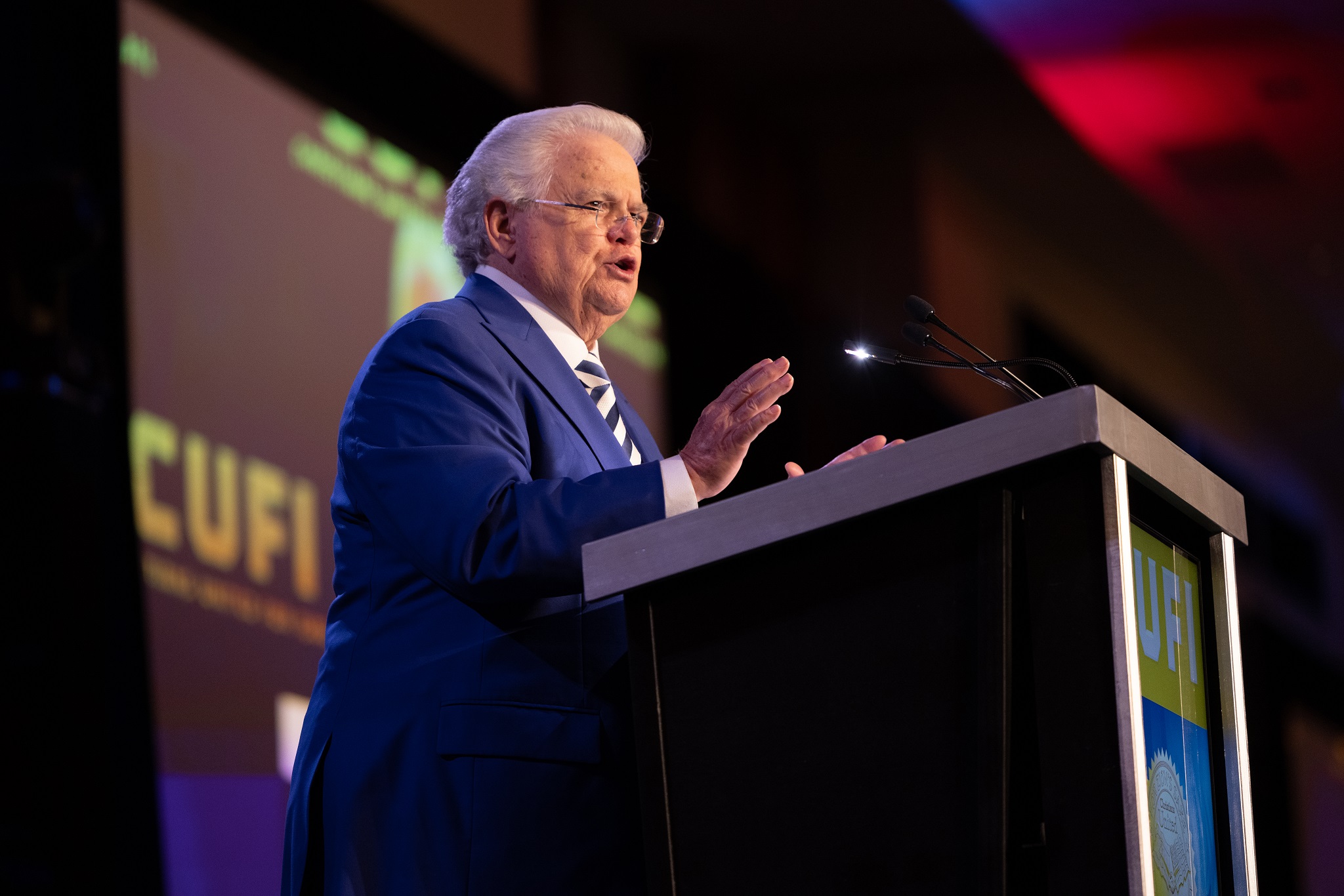 ‘History teaches us that we are one’

Malcolm Hoenlein, vice chairman of the Conference of Presidents of Major American Jewish Organizations, who spoke after Hagee, aptly explained the importance of groups like CUFI for the mainstream Jewish community, having been at every national summit since its inception in 2006 and speaking at almost all of them.

He called it the singular gathering of the year among the myriad of pro-Israel conferences held nationally.

“For me, it’s a chance to recharge my batteries. I come to you for inspiration—the energy, the love that we feel here every year,” he said. “And bring that message back to the American Jewish community, in every forum I can, my weekly radio shows, everywhere.”

Hoenlein told the audience that one of the most disturbing trends he has been seeing in the world today is the undermining of traditional values and the campaign to revise and distort history, which to Judaism, he said, was sacred.

Long before Winston Churchill warned to study history or repeat it, Jewish sages, he said, were saying the same thing thousands of years ago.

“For Judaism, history is sacred. Why would we mark it for 2,443 years? We look back in order to look forward. We look back to learn the lessons. We look back to spare future generations these trials and tribulations. We learn from the success and the failures of the past,” he said. “You can’t rectify the challenges of today or the mistakes of the past by rewriting history, by denying truth.”

The story of anti-Semitism he said, was the same in every generation and today is no different. That is why the Passover Haggadah, he pointed out, uses the present tense that “enemies arise that seek to destroy us.”

“It reminds us that while the colors of the uniforms may change, or the language may be different, the enemy is the same,” he said. “Those who hate God hate the Jews. Those who want to eradicate our common tradition hate the Jews. And that’s why in every generation they come up.”

Hoenlein said that the Exodus in the Bible happened after the Jews were ready to be redeemed.

“Because first, you have to be psychologically free before you can be physically free,” he said. “We have to break those yokes that hold us back from doing exactly what Pastor Hagee said. The time is now. It’s a time to move from words to action.”

This meant that as a Jew, he no longer wanted to be a “canary in the coal mine” or “barometer for the conscience of mankind.” While the nature of hate might not have changed, he said, there are groups like CUFI that are ready to stand up against hate.

“They mourn us so eloquently but can’t tolerate us as living beings,” he said.

He urged for global action using all tools to fight anti-Semitism, to declare a national day of solidarity with the Jews, have sermons in every church against anti-Semitism and push for domestic terror laws.

“Indeed, history teaches us that we are one, and we have to show the world that we are one,” he said. “The haters and their backers will be isolated. In the end, they won’t win.”

He was followed by Rabbi Abraham Cooper, associate dean and director of the global social action agenda at the Simon Wiesenthal Center.

Cooper spoke of his recent visit to the United Arab Emirates and Bahrain, saying remarkably, it’s now safer to be an Orthodox Jew in one of those Arab countries than it is in some parts of the United States.

“I can confirm to you, that we have a situation where Bahrain embraced the IHRA definition [of anti-Semitism], but we can’t get the University of Southern California to do the same,” he said. “I could confirm to you that I can and did walk freely in Abu Dhabi, in Manama—throughout the Gulf—with a kipah, without looking over my shoulder. I cannot say the same for Los Angeles, where I live, or New York,” he said, where “anti-Semitism is alive and well.” 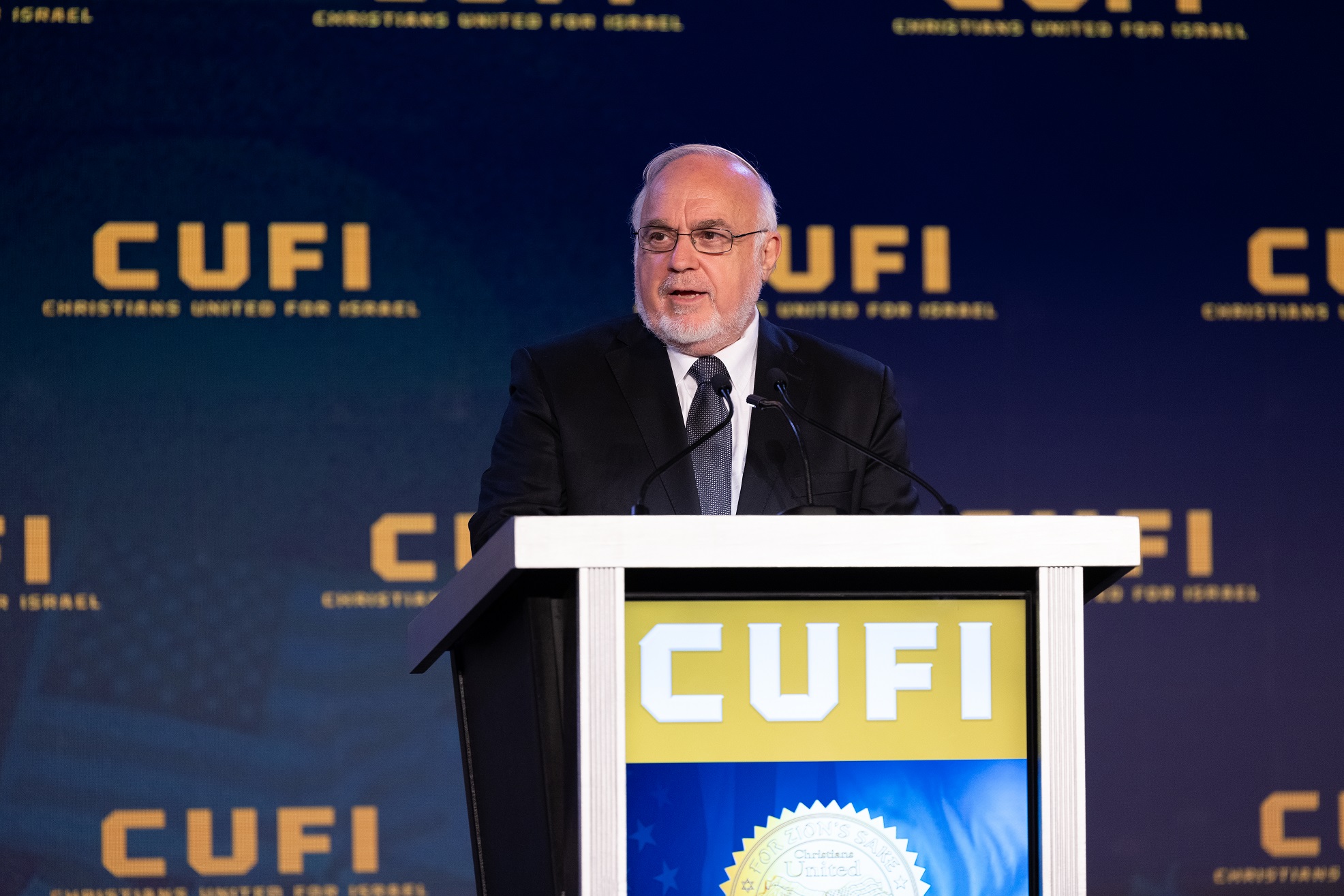 The evening, which lasted from 9 a.m. to just before 9 p.m. with a two-hour break in the afternoon, included briefings from the Israel Defense Forces’ spokesperson, Israeli Foreign Minister Yair Lapid, panels from think tanks and presentations that organizations such as CUFI on Campus and the Israel Collective—all geared to working with young evangelicals. There were presentations about CUFI’s 2021 agenda and speeches from state legislators about the pro-Israel work they have accomplished with the help of CUFI in their states.

Conference of Presidents CEO William Daroff spoke about the double-digit percent increase of anti-Semitism in the United States and praised positive developments like the Abraham Accords.

“The world witnessed a transformation of these former foes of Israel, choosing diplomacy over discord. In a matter of months, the consensus for peace expanded at an astonishing rate as these countries, one after another, saw the necessity and the merit of regarding Israel as a friend and a partner rather than as an enemy,” he said. “America and Israel discovered that the approach of having all roads run through Ramallah is not the only option. In this new era, Middle East peace is no longer held hostage by the whims of a man, Mahmoud Abbas, who’s serving in the 16th year of his four-year term, and leadership that, to quote the great Israeli statesman Abba Eban, ‘never misses an opportunity to miss an opportunity.’ ”

He also informed the audience that earlier that day, Ben & Jerry’s announced that they will no longer be selling their ice-cream in the West Bank settlements and eastern Jerusalem—areas they deemed “occupied Palestinian territory,” and possibly all of Israel.

The good news, he said, is that because so many U.S. states have passed laws against BDS that prevents state funds to be invested in companies that boycott Israel, the move by is going to financially hurt the ice-cream maker and its parent company, Unilever.

Following Daroff, Sandra Hagee Parker, chairwoman of the CUFI Action Fund, told the audience that she had already sent an email to the Texas-based company Blue Bell, urging them to make their ice-cream kosher and come out with pro-Israel-themed ice-cream.