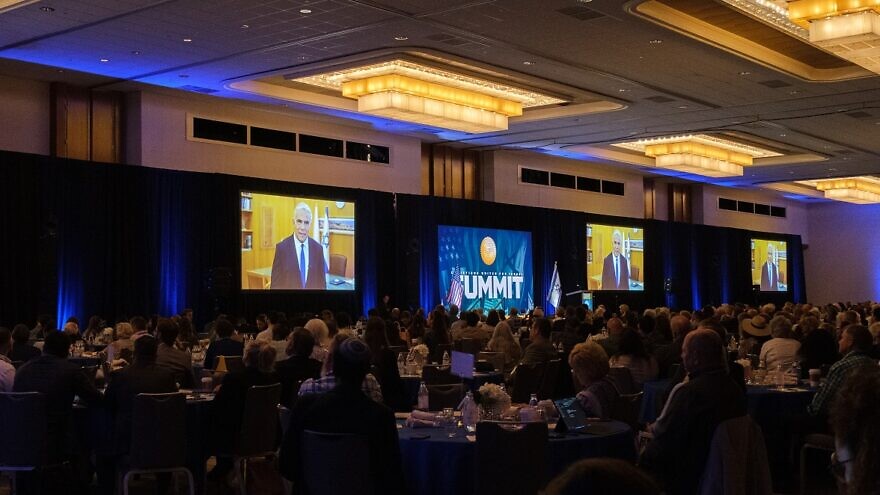 (July 20, 2021 / JNS) In a video address to the 2021 summit of Christians United for Israel, Israeli Foreign Minister Yair Lapid on Monday expressed his appreciation to the largest pro-Israel organization in the United States for their ongoing support—most recently, during and after the 11-day conflict with Hamas in Gaza in May.

While its base is American evangelicals, which are largely politically conservative, CUFI as an organization emphasized that it makes its decisions based on the pro-Israel issues it believes in. While evangelicals fervently supported former Israeli Prime Minister Benjamin Netanyahu, CUFI so far is embracing Israel’s new diverse leadership, including Lapid and Prime Minister Naftali Bennett.

Lapid told the approximately 700 invited attendees to the in-person summit in Dallas that the new administration in Israel plans to represent all Israelis, no matter the level of religiosity, political views or background, including those who did not vote for the coalition government.

Lapid said the government is “proud of our Jewish heritage and Jewish identity, and equally proud of our democracy and our commitment to liberty and freedom.”

He thanked CUFI for its support of Israel during the recent conflict and for pro-Israel legislation in Congress, including military aid to Israel.

Most importantly, Lapid said the country is grateful for not making comparisons between Israel and the terrorist organization that launched more than 4,000 rockets towards Israeli population centers in May.

He noted that while wars are devastating and every loss of life, especially those of children, is a tragedy, the world has a responsibility to make clear that Hamas is responsible for these deaths—terrorists who fire rockets and hide behind kids, using them as human shields with a complete disregard for their own civilians.

“Our new government has made its policy clear. We will use as much force as necessary to strike back against terrorists and do whatever we can to minimize the impact on innocent civilians,” said Lapid.

He pointed to the numerous cooperation initiatives between Israel and the United States, which CUFI has supported through its lobbying efforts, such as the joint Iron Dome air-defense system and the F-35 fighter jet.

‘Israel is an optimistic story’

There are other, less open collaborations, he said, such as the sharing of intelligence between the two nations that have saved countless of lives.

“Israel faces challenges on all fronts—from Hamas in the south to Hezbollah in the north, from Iranian-backed militias in Syria to Iranian scientists developing their nuclear program in Iran. We will face all these challenges head-on alongside our friends … ,” said Lapid. “But the challenges won’t define us. Israel is, at its core, an optimistic story. It is a story of success against all odds and the story continues today.”

Hagee described the group’s latest visit to Israel in the wake of the conflict, along with former Israeli Ambassador to the United Nations Nikki Haley, where participants met with the new foreign minister.

Diana Hagee said Lapid asked her husband why Christians are so supportive of Israel—to which the pastor gave a strong and rather lengthy response.

As for Lapid, she said that “we found him to be intelligent, thoughtful and charismatic, and we have every confidence that he will serve as a great statesman for Israel.”