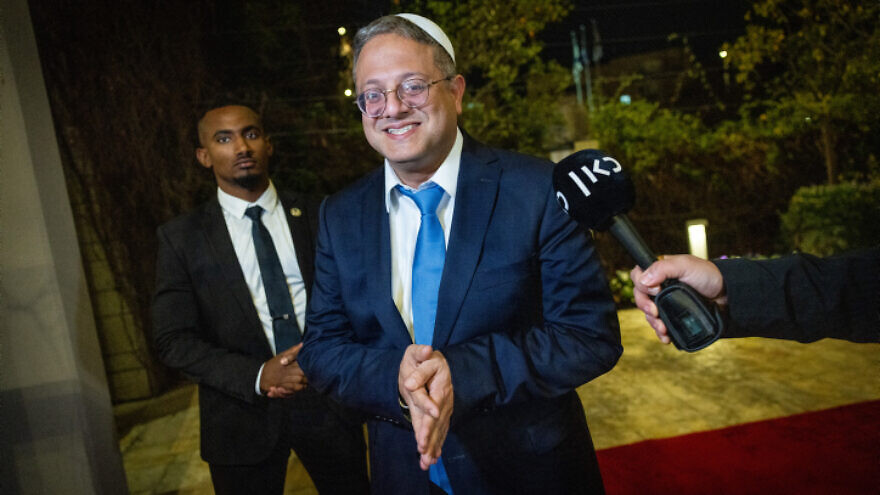 (January 8, 2023 / JNS) Israeli National Security Minister Itamar Ben-Gvir announced on Sunday the cancelation of a regulation implemented by the previous government that allowed any lawmaker to meet with jailed Palestinian terrorists.

“I believe that meetings between Knesset lawmakers and security prisoners can give those prisoners a boost….It’s time to stop the rewards for terrorists, ” said Ben-Gvir.

The decision follows Ben-Gvir’s tour last week of the maximum security Nafha Prison, near Mitzpe Ramon in the Negev, during which he vowed that Palestinian terrorists would not benefit from renovations at the facility, including those resulting from a High Court ruling that they have at least four square meters (43 square feet) of living space per inmate in their respective cells.

“I came to ensure that the murderers of Jews are not getting better conditions as a result of the construction…and I was glad to see that the Israel Prison Service does not intend to improve [them],” Ben-Gvir, who is in charge of the police and prison system, said.

Ben-Gvir on Tuesday created an international firestorm by defying Hamas and the Palestinian Authority and ascending the Temple Mount in Jerusalem’s Old City.

In response, the U.N. Security Council convened an emergency meeting, during which Robert Wood, a diplomat representing the U.S., said, “We are concerned by any unilateral acts that exacerbate tensions or undermine the viability of a two-state solution.” He added that Washington “firmly supports the preservation of the historical status quo with respect to the holy sites in Jerusalem, especially on the Haram al-Sharif/Temple Mount,” using both the Islamic and Jewish/Christian names for the site.

“In this spirit, we oppose any and all unilateral actions that depart from the historical status quo that are unacceptable,” Wood said, noting that he expects Israeli Prime Minister Benjamin Netanyahu’s government to follow through on a commitment to maintaining the status quo at the holy site.

Israel’s ambassador to the United Nations said he was “overjoyed” when he heard that the Security Council was holding an emergency meeting over the “quiet, orderly, uneventful” visit of an Israeli government minister to the Temple Mount.

“I figured that if this important body is meeting to discuss such a trivial matter, then we clearly achieved world peace overnight,” Gilad Erdan said, mocking the council’s decision to submit to the Palestinians’ demand for a discussion on the matter.

Erdan noted that Ben-Gvir entered through the only entrance for non-Muslim to the Mount at one of the limited designated times of the week for Jewish admittance, entered alone save for the security detail needed to protect him and made no attempt to pray.