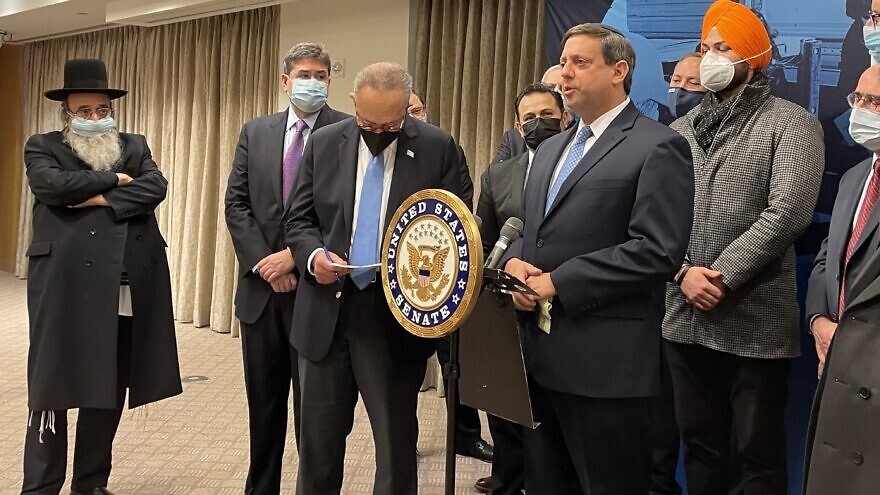 (March 28, 2022 / JNS) Jewish communal groups are commending the higher level of funding for the Nonprofit Security Grant Program (NSGP) proposed in U.S. President Joe Biden’s budget proposal for 2023, which was presented on Monday less than two weeks after signing the Omnibus spending bill approved by Congress for this year.

The new budget requests the NSGP to be funded at $360 million—a funding level that has been requested for the growing program by Jewish organizational leaders, especially because of the uptick in anti-Semitic attacks against Jews and Jewish institutions in the past year.

The NSGP received $180 million in funding in 2021, which resulted in many organizations being rejected.

The hostage situation at Temple Beth Israel synagogue on Jan. 15 in Colleyville, Texas, reinforced the need for such programs, which can be used to improve building security and provide training. Calls to increase NSGP’s funding increased, and with the backing of organizations, Congress was able to increase funding for the program to $250 million in 2022, as well as outline improvements for its administration.

“We’re extraordinarily grateful to President Biden for proposing $360 million for the Nonprofit Security Grant Program—a program that saves lives and protects houses of worship,” said Elana Broitman, senior vice president of public affairs for the Jewish Federations of North America, in a news release. “The need for these protections has only grown amid increasing terrorist and domestic extremist threats—as we saw in Colleyville, and in bomb threats against Jewish Community Centers and HBCUs [Historically Black Colleges and Universities] in recent weeks.”

While many organizations that apply for grants such as day schools, synagogues and community centers are Jewish, the grant can also be accessed by other religions and nonprofit organizations that may be under threat of terrorist acts.

“It’s very important and useful for the administration to propose $360 million for NSGP. That’s the level of funding that we’ve been advocating for a few years, and the president’s budget is very much a blueprint for what at least the Democrats in Congress who are running the Hill these days are going to strive to fund,” said Nathan Diament, executive director of the Orthodox Union Advocacy Center.

While budgets have been hard to fund in recent years, Diament told JNS that he was confident that the new funding level will be passed, especially with the president’s party controlling Congress and NSGP’s bipartisan support.