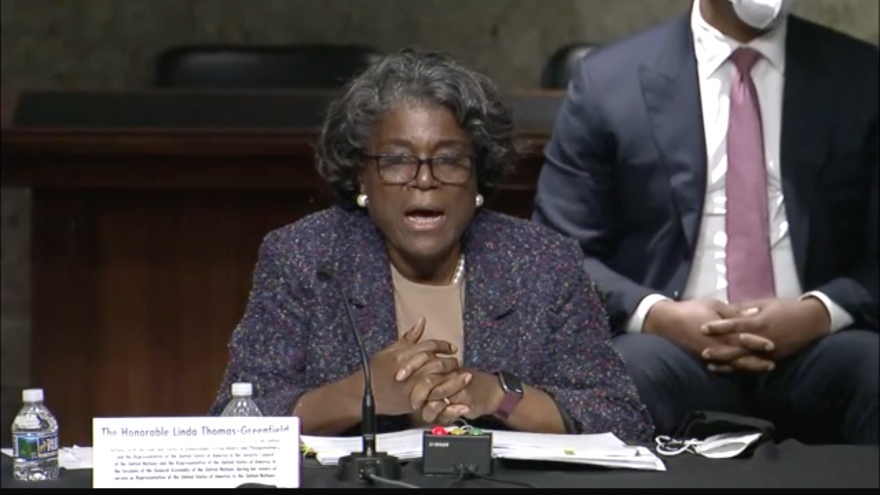 (January 27, 2021 / JNS) U.S. President Joe Biden’s nominee to be U.S. ambassador to the United Nations pledged on Wednesday to combat the anti-Israel bias at Turtle Bay.

“I look forward to standing with Israel, standing against the unfair targeting of Israel, the relentless resolutions proposed against Israel unfairly,” said Linda Thomas-Greenfield at her nomination hearing in front of the U.S. Senate Foreign Relations Committee. “I look forward to working with Israel to develop a strategy with them for engaging with countries that would appreciate having Israel’s expertise to support their development efforts.”

Thomas-Greenfield, a 35-year diplomat, expressed hope that those countries that have normalized ties with Israel under the Abraham Accords—the United Arab Emirates, Bahrain, Sudan and Morocco—“will also see some opportunities to be more cooperative at the U.N. and more supportive of Israel’s presence there.”

On Iran, Thomas-Greenfield assured that the Biden administration will work to prevent the regime from getting a nuclear weapon.

“We’ve seen a tremendous amount of backtracking since” the United States withdrew from the 2015 Iran nuclear deal, she said. The withdrawal in May 2018 was followed by reimposing sanctions lifted under it, along with enacting new sanctions as part of what the Trump administration called a “maximum pressure” campaign.

Thomas-Greenfield said America would work with its allies and other members of the U.N. Security Council to “ensure that we hold Iran accountable.”

Additionally, she noted that the United States would rejoin the U.N. Human Rights Council and the United Nations Educational, Scientific and Cultural Organization, or UNESCO.

The United States withdrew from the UNHRC in June 2018 after then-U.S. Ambassador to the United Nations Nikki Haley cited the world body’s “chronic” bias against Israel as one of the primary factors for the withdrawal.

The United States defunded UNRWA in September 2018, claiming that the refugee agency, which serves Palestinians, inflates the number of Palestinian refugees and furthers the Palestinian refugee problem. Critics have also said that UNRWA has inspired violence against Israel.

Finally, Thomas-Greenfield expressed opposition to the BDS movement against Israel, saying that it is “unacceptable” and “verges on anti-Semitic,” and “it’s important that they not be allowed to have a voice at the U.N., and I intend to work against that.”