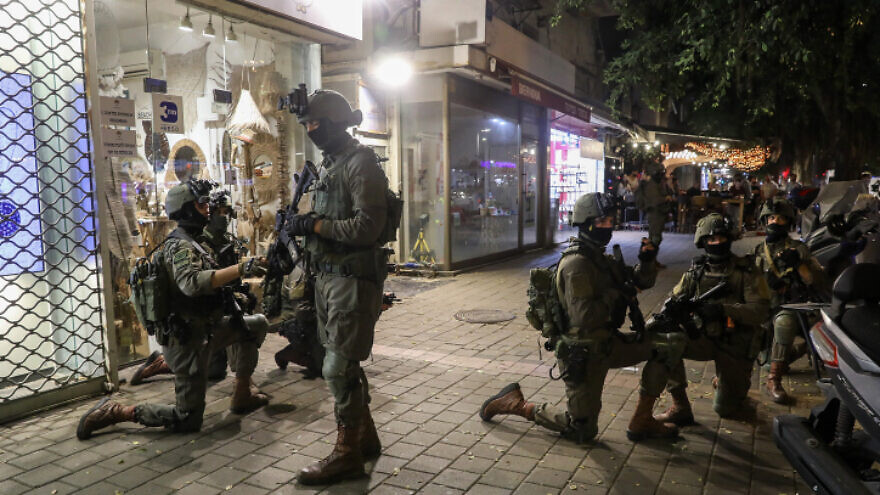 Israeli soldiers search for an armed terrorist on Dizengoff Street in Tel Aviv on April 7, 2022. The terrorist was located the following morning hiding near a mosque in Jaffa, and was killed in a shootout with Israel Security Agency officers. Photo by Noam Revkin Fenton/Flash90.
Spread the word.
Help JNS grow!
Share now:

(April 11, 2022 / JNS) Two wanted brothers of the Palestinian terrorist who carried out the deadly shooting in Tel Aviv on April 7 narrowly escaped capture by Israeli forces on Sunday, according to the Israeli military.

The incident began when the Israel Defense Forces received intelligence that the wanted men were in a suspicious vehicle that had been spotted near the terrorist’s Jenin home.

Ra’ad Hazem was shot dead by Israeli security forces in Jaffa on Friday morning, several hours after he opened fire on a bar in Tel Aviv, murdering three Israeli civilians.

The IDF is seeking Hazem’s father, a former Palestinian Authority security officer, and brothers for questioning.

During the operation on Sunday, the Israeli forces were fired on by a suspect on a passing motorcycle, the military said. The soldiers returned fire, hitting the suspect, according to the IDF. No information was available regarding the shooter’s condition.

On Saturday, IDF and Border Police forces surveyed Hazem’s family home ahead of its planned demolition.

A second Palestinian gunman, who is on a Shin Bet wanted list, was seriously injured and was taken into custody before being evacuated for medical treatment in Israel.

Speaking to crowds outside of his home on Friday morning, the terrorist’s father, Fathi Hazem, said, “You will achieve victory if Allah wills it, in your generation, in the coming years, in the coming days,” according to a report by Kan News.

“Your eyes will see the change. You will head out to freedom and gain your independence. Allah, liberate our Al-Aqsa mosque from the contamination of the occupiers,” he said, according to the report.