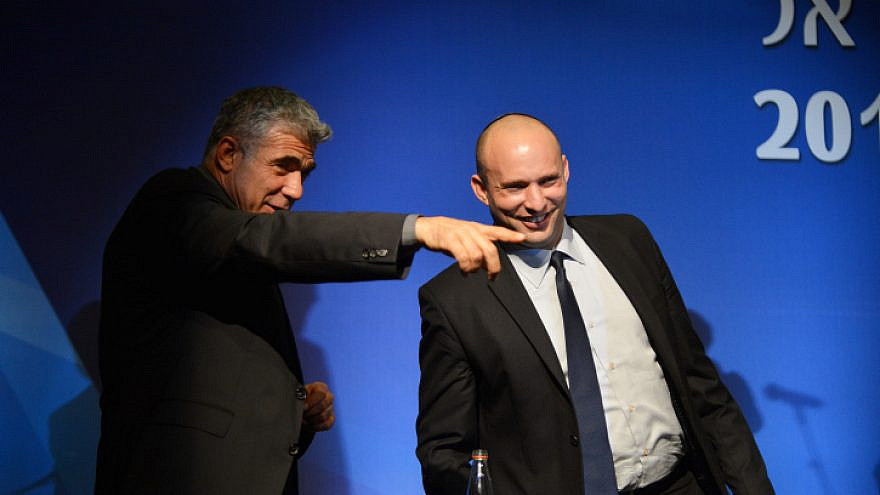 (June 9, 2021 / JNS) With the likelihood that new leadership will be sworn in next week in Israel, Prime Minister Benjamin Netanyahu’s departure from the role he has held for almost two decades has some worried about how an inexperienced leadership spanning the breadth of viewpoints will handle Israel’s important relationship with the United States.

During his tenure, Netanyahu exerted an understanding of U.S. politics and culture unmatched by previous Israeli leaders—popular among politicians and voters in the United States, especially Republicans—one that other prime ministers had not achieved.

In the same vein, however, he also ruffled some feathers.

Michael Doran, a senior fellow at the Hudson Institute and former senior director focused on Middle East policy in the National Security Council under President George W. Bush, said Netanyahu was singular among Israeli leaders in understanding the American political environment, and how to speak directly to Americans and express the Israeli position.

It helped, of course, that he spent his teen years in the Philadelphia area, and later, earned a master’s degree from the Sloan School of Management at the Massachusetts Institute of Technology.

Netanyahu, said Doran, could also stand up to leaders in the United States—something he demonstrated by his 2015 speech to a joint session of Congress.

The lack of clout will show itself most when dealing with Iran, he said, as Netanyahu had an understanding of all the dimensions of the Iran issue—not just its nuclear ambitions, but its role in consolidating power on the ground in Arab countries.

“I think the strength of Israeli feeling, particularly about the nuclear weapon, is such that they will continue their clandestine efforts to sabotage the Iranian nuclear program, but that will be a point of contention with the United States, assuming the United States goes back to the JCPOA and doesn’t change course,” said Doran.

“But as long as the United States is on the path it’s on,” he said, “which is to engage and appease Iran, then this is going to be a point of significant contention, and I think it will be easier for the United States to bully the new leaders and I think that they will be more receptive; they will be more interested in trying to curry favor in Washington by curbing some of their activities.”

Indeed, last week Israeli Defense Minister Benny Gantz, who will retain his position in the prospective new government, met with senior officials in the Biden administration to express his deep concerns over Iran’s nuclear ambitions and U.S. negotiations. Doran said the United States entered the JCPOA without consulting Israel and began negotiations to re-enter the deal under Biden without consulting Israel. American’s Iran policy will continue to be unilateral towards Iran.

“This is a unilateral American policy towards Iran, and it is one that the Israelis are only going to be able to influence by standing up with a lot of fortitude to the Americans,” said Doran. “And these guys don’t have the experience or the understanding of the issues to do that.”

‘They’re not going to want to play Democrats against Republicans’

Other experts in the United States, however, believe that if sworn into office, Israel’s new leaders—likely incoming Prime Minister Naftali Bennett and incoming Foreign Minister Yair Lapid—might have more clout among Biden administration officials and its policies.

Aaron David Miller, a senior fellow at the Carnegie Endowment and former U.S. State Department analyst and negotiator, said that if formed, the new government will have more influence over U.S. policy than that of Netanyahu because the diverse coalition of that government—spanning the Israeli left, center and right—would indicate broader support for the policies it espouses. That same diversity will also constrain it from taking Netanyahu-style partisan actions that anger Democrats.

“Whatever provocation has Netanyahu acquiesced to or agreed to on the West Bank with respect to closing that plaza in front of Damascus Gate and legal issues—Sheikh Jarrah, which was already in play—and the heavy-handed police response,” he continued. “That the government-inspired stuff is going to be very low-key because Bennett now understands, as do his partners, that they’re both constrained in a kind of mutually assured destruction.

“So you’re going to have an Israeli government, I think that the Biden administration is going to be quite happy with and willing to pay great attention to. And a billion-dollar package [for Iron Dome System interceptors] is going to be only too happy to grant,” he said.

Miller said he didn’t see Bennett or the new government ministers intervening in American politics to the extent Netanyahu did.

“They’re not going to want to play Democrats against Republicans the way Bibi did. And that will, I think, create a much different relationship. A better one,” he said.

While that may or may not be the case, like Netanyahu, Bennett has a deeper understanding of America than most other Israeli politicians, and a strong command of American English, and could use that to his advantage as well. Bennett is the son of American immigrants and, like Netanyahu, spent significant time during his childhood in the United States.

‘It may strengthen Israel’s position in American politics’

Natan Sachs, director of the Brookings Institution Center for Middle East Policy, agreed with Miller that a new coalition government could bring certain advantages that an experienced Netanyahu couldn’t, especially during a Democratic administration.

Netanyahu, said Sachs, is toxic to Democrats and seen as openly adversarial. Even Bennett, who at times has been further right than Netanyahu, is not as reviled. Even better for Democrats would be the potential of Lapid becoming the foreign minister as he has openly spoken about the need for Israel to have bipartisan support in Washington.

“If you think of the AIPAC’s position … , for AIPAC it was sacrosanct the idea that Israel would be bipartisan so that it wouldn’t depend on which party is in power. And Netanyahu very strongly adopted the opposite view, which was that Israel needed or should tie its fate to the Republican Party,” said Sachs. “And when Republicans are in power, especially someone like [former U.S. President Donald] Trump, that was beneficial for Netanyahu. As soon as Trump is out of office, it’s less so.”

But even if Democrats are more willing to accept the new government and its policies, Israel is unlikely to lose support among Republicans according to Elliott Abrams, senior fellow for Middle Eastern studies at the Council on Foreign Relations.

“I think when you look at … Republican leaders and you look at all the poll data about their voters, support for Israel is very strong,” he said.

But part of what could potentially make the new government more influential among American officials is the Democratic Party’s voters are gradually becoming less supportive of Israel, according to Abrams. He pointed at polls in the past few years of American voters that indicated less weakening of support for Israel among Democratic voters.

“Joe Biden and other Democratic leaders know that they have a problem. I mean, they read the same poll,” said Abrams. “And they’re … not going to want to push more people who care about Israel into supporting Republicans. To the extent that this was a Netanyahu issue, they can get past it now. So I don’t think this is going to weaken Israel’s position, and it may strengthen Israel’s position in American politics.”

Bennett, even though he also disagrees with the Iran deal, is unlikely to push against America’s efforts to re-enter the nuclear deal. This would allow U.S. Secretary of State Antony Blinken more room to maneuver as it relates to Iran, while allowing better relations to ensue between the Israeli government that is not seen as impeding Blinken’s efforts.

“Bennett’s ability [and] willingness to oppose the Iran deal, by comparison with Netanyahu, is just going to go down 100 decibels,” said Miller. “He can say he’s against it, but there will not be an effort like there was on the part of Netanyahu to undermine it.”

As far as peace between Israel and the Palestinians is concerned, Doran believes that the new Israeli leaders won’t make much of a difference.

“The fact that some of the members of this coalition might be more amenable to concessions isn’t going to make any difference because there still isn’t, there aren’t the necessary concessions [being made] on the other side,” he continued. “The two sides are just too far apart, but even more important is the fact that this new coalition is a very strange animal. Naftali Bennett and [New Hope Party leader] Gideon Sa’ar are not more moderate than Bibi Netanyahu on that question. American pressure on Israelis to move towards a two-state solution will just bust this government apart. So nothing is going to happen there.”