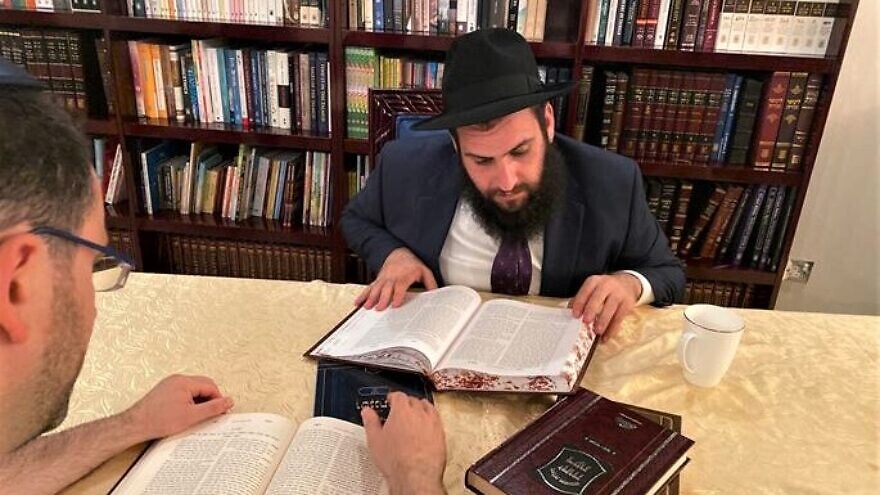 (November 1, 2020 / Chabad.org/News) Each new day seems to bring with it historic good news from the Middle East. August’s surprise announcement of the United States-brokered Abraham Accords between the United Arab Emirates and Israel was followed a month later by a similar agreement between the Kingdom of Bahrain and Israel. The two Arab states and Israel signed their respective agreements on the White House lawn on Sept. 15, and it has been a flurry of firsts ever since: direct commercial flights, delegation exchanges, embassy applications.

These rapid developments have been a boon for the growing Jewish community in the entire Gulf region, which over the last few years has been quietly emerging from the shadows. Last week marked yet another first when the Chabad-Lubavitch movement announced its appointment of Rabbi Levi Duchman, the rabbi of the United Arab Emirates, as the Chabad emissary to the UAE.

“Thank G‑d, Jewish life here in the UAE has been able to blossom like a desert rose,” says Duchman. “The coexistence and true respect people have for one another here is beautiful, and unfortunately, all too unique. It’s also clear that none of this could have happened without the support and vision of the UAE’s benevolent leader, his highness Sheikh Mohammed bin Zayed Al Nahyan, and is something the entire world can learn from.”

The UAE has in recent years become known for its commitment to tolerance and coexistence—more than 200 nationalities live and work in the Gulf state—and Jews have lived in the seven emirates on and off for decades. The Israel-UAE agreement formalizes this understanding, highlighting “ … that the Arab and Jewish peoples are descendants of a common ancestor, Abraham,” with this spirit inspiring the two countries “to foster in the Middle East a reality in which Muslims, Jews, Christians and peoples of all faiths, denominations, beliefs and nationalities live in, and are committed to, a spirit of coexistence, mutual understanding and mutual respect … . ” 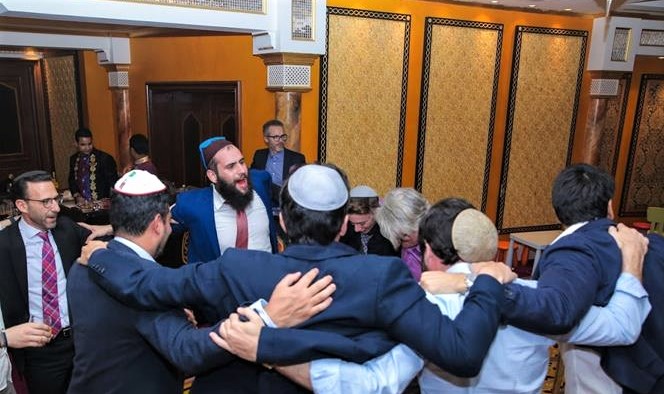 Rabbi Levi Duchman (center) and Jews of the United Arab Emirates celebrate the holiday of Purim at the Burj Al Arab Hotel. Duchman has been the UAE’s only resident rabbi for the last six years; the Chabad-Lubavitch movement recently announced his appointment as Chabad emissary to the UAE. Credit: Chabad.org/News.

Chabad’s involvement with the UAE stretches back as early as 2008 when New York Jewish businesspeople who had been traveling to the UAE approached Rabbi Yehuda Krinsky—chairman of Merkos L’Inyonei Chinuch, the educational arm of the Chabad-Lubavitch movement—requesting to send a rabbi to help develop Jewish life there. In 2010, Chabad rabbinical students arrived in Dubai to lead the first-ever Yom Kippur service in the Arab state, and rabbinical students have been visiting for every Jewish holiday ever since.

Duchman first came to the UAE in the winter of 2015, following up a few months later to lead the communal Passover seder in the capital city of Abu Dhabi. He moved to the country later that year.

“At the time, there were a number of Jewish families here already, and nothing by way of Jewish education,” explains Duchman. That November, Duchman opened a Talmud Torah with four children; today, it boasts 40 students.

Similar to its work on behalf of isolated Jewish communities around the world, Chabad has long supported the Jews of the UAE in a variety of capacities. Chabad.org’s Ask the Rabbi team, for example, has maintained a close dialogue with the local community for years and helped visitors and new residents connect. UAE children too old for Duchman’s Talmud Torah receive a Jewish education in Chabad’s Nigri International Jewish Online School. 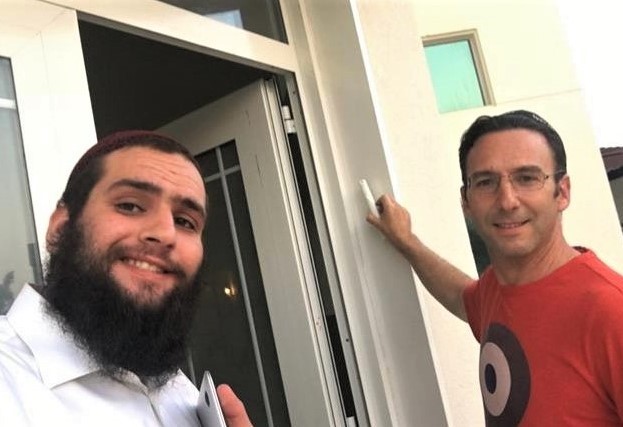 There are three synagogues in the UAE: two in Dubai and one in Abu Dhabi. Here, Duchman assists Ross Kriel with affixing the mezuzah to the Villa Synagogue. Credit: Chabad.org/News.

Dubai, a city of 3.3 million people and the UAE’s largest, is home to two synagogues. One is led by Ross Kriel and New York-based Rabbi Yehuda Sarna, a chaplain at New York University. The other—some 20 kilometers up the coast—is led by Solly Wolf, who has lived in the UAE for the last 20 years, and Rabbi Duchman, who has been the only resident rabbi for six years and has been granted permanent residency. The latter even has a minyan three times daily. Duchman, who speaks five languages, including French and multiple dialects of Arabic, also helped found the Jewish community in Abu Dhabi, and recently opened the capital’s only synagogue and Jewish community center, which held its inaugural services this past Rosh Hashanah.

“I’ve been closely following the growth and success of the UAE Jewish community over the last decade and have been able to see it with my own eyes,” says Rabbi Moshe Kotlarsky, vice chairman of Merkos L’Inyonei Chinuch, who over the past years has visited the UAE to meet with its Jewish leadership. Kotlarsky, among whose responsibilities is overseeing Chabad’s rabbinical visitation program, has for decades maintained contact with small outlying Jewish communities around the world, the UAE among them. “I congratulate the community and its leaders on their monumental past success and bless them to go from strength to strength as they celebrate these new milestones.” 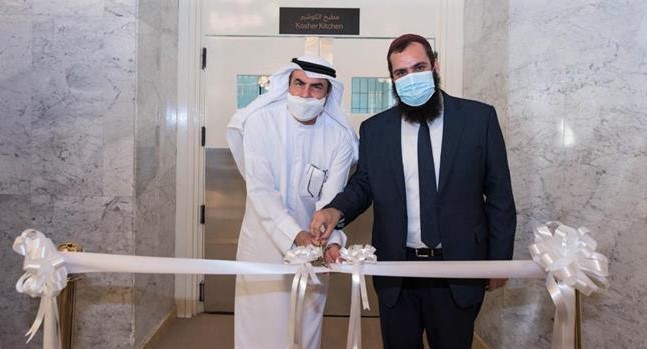 The rabbi at the ribbon-cutting ceremony for the new kosher kitchen at the U.S. Armed Forces Officers Club and Hotel in Abu Dhabi. Duchman’s kosher supervision service, Emirates Agency for Kosher Certification (EAKC), partnered with the Abu Dhabi Department of Culture and Tourism, and certifies a kosher kitchen in the officers club and the Emirates Palace Hotel. Credit: Chabad.org/News.

‘Things have been moving at a breathtaking pace’

Chabad of the UAE builds on the 130-year-old relationship between the Russian Chassidic movement and the Jews living in Muslim lands. Already in 1892, Rabbi Shlomo Yehuda Leib Eliezerov, a follower of the Fifth Rebbe, Rabbi Sholom DovBer of Lubavitch, was dispatched to Bukhara, Central Asia, where he worked to strengthen its Jewish infrastructure and ultimately served as rabbi of Samarkand for nearly a decade. The brilliant halachic scholar and Chassid Rabbi Avraham Chaim Naeh arrived in Samarkand in 1911 where, after exchanging his Eastern European clothing for the traditional local garb, he likewise focused on bolstering all aspects of Jewish life.

Rabbi Sholom DovBer’s son, Rabbi Yosef Yitzchak Schneersohn, expanded this work, both in Central Asia and the Caucuses, and after World War II laid the groundwork for Chabad’s first outpost in North Africa. Indeed, following the ascension of the Lubavitcher Rebbe—Rabbi Menachem M. Schneerson—as leader of Chabad in 1950, the first place he sent emissaries to was Morocco, building a network of Chabad Jewish schools from Meknes to Casablanca, later also adding centers in Tunisia. Chabad of Morocco remains a vibrant center for Jewish life and is, in fact, directed by Duchman’s brother-in-law and sister, Rabbi Levi and Chana Banon. Duchman received his rabbinic apprenticeship in Casablanca.

“There’s a unique bond between Rabbi Duchman and the Jews of the UAE,” says Kotlarsky. “Since his initial visit six years ago, we’ve been hearing from residents requesting that [he] remain there.”

Jewish life in the UAE has bloomed since Duchman first arrived, and just last year, the rabbi presided over one of the UAE’s first bar mitzvahs. Things have been moving at a breathtaking pace since.

Aside from running Shabbat and holiday services, and teaching a host of regular Torah classes, Duchman—who is vice president of ARIS, or the Alliance of Rabbis in Islamic States, which includes rabbis serving communities in countries such as Turkey, Kyrgyzstan and Uganda, among other states—has been instrumental in making kosher food available in the emirates. What began with photographing kosher products in supermarkets and tagging them on Instagram for public awareness morphed into the country’s first kosher shechita, which he arranged in 2017.

Earlier this year, he opened the Emirates Agency for Kosher Certification (EAKC), which works hand in hand with a number of worldwide kosher-supervision organizations, and today, EAKC supervises one glatt-kosher meat restaurant, Armani/Kaf. (Pictures of the public sukkah erected by Duchman nearby at the base of the iconic Burj Khalifa went viral). Another food establishment, Elli’s Kosher Kitchen catering service in Dubai, is under the Orthodox Union’s (OU) supervision, and the OU is also active in supporting Jewish life in the UAE. 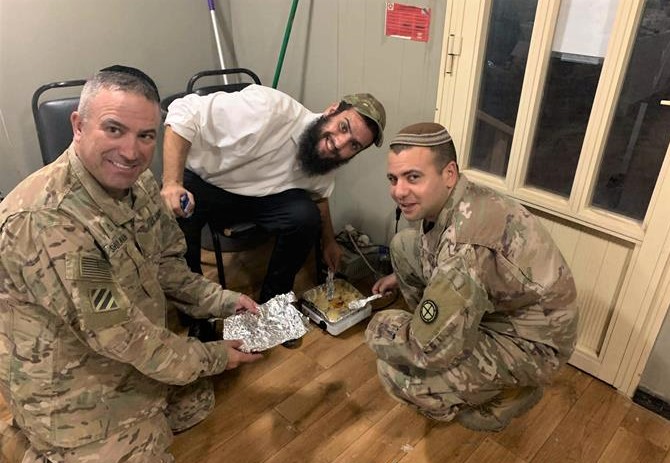 ‘Our eagerness to serve kosher cuisine’

Now, after the Abu Dhabi Department of Culture and Tourism advised hotels in the emirate to provide a kosher-food option, the department has partnered with EAKC to help guide hospitality establishments in the kosher process and provide certification. The five-star Armed Forces Officers Club & Hotel in Abu Dhabi, which regularly provides catered meals to thousands, now maintains an EAKC kosher-certified kitchen, as does the Emirates Palace Hotel.

“We want to emphasize that our eagerness to serve kosher cuisine to guests who prefer it springs from our respect for cultural diversity,” explained Shaikha Al Kaabi, CEO of the Armed Forces Officers Club and Hotel, after the kosher kitchen’s ribbon-cutting ceremony. “The UAE is a land of tolerance and pluralism, and we want our cuisine to reflect the national ethos … .”

Duchman, who was a member of the UAE’s delegation to the Peace and Prosperity conference in Bahrain last year, has also spent time assisting Jewish communities throughout the Gulf region. He’s visited the small Jewish community in Kuwait, as well as Jewish members of the U.S. armed forces stationed on two bases there; conducted a funeral in Bahrain; and flown to Oman to help the tiny Jewish presence in Muscat. With his official appointment as the Chabad emissary to the UAE, Duchman will be focusing his efforts on the emirates, yet with a continued eye towards helping every Jew in the region.

“The rapid growth of authentic Jewish life and learning in the UAE is truly a herald of the prophet Isaiah’s words of the era when ‘nation shall not lift the sword against nation, neither shall they learn war anymore,’ ” shares Duchman. “We’re living in a very special time.” 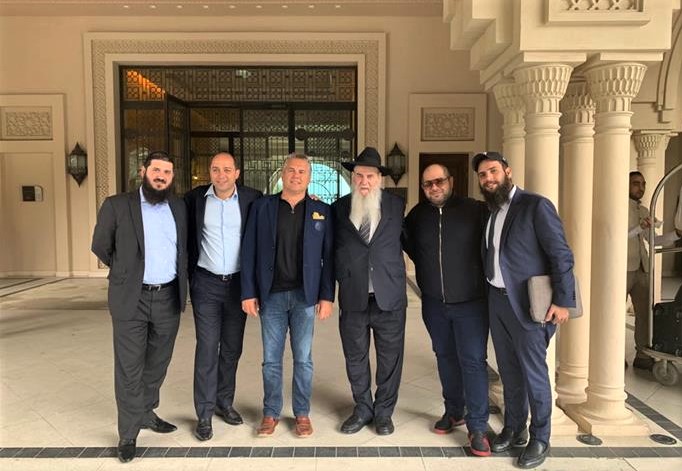 Rabbi Moshe Kotlarsky (third from right), vice chairman of Merkos L’Inyonei Chinuch, on a visit with the UAE Jewish community. Duchman is on the far right, and Rabbi Mendy Kotlarsky, director of Chabad’s Merkos 302, is on the far left. Credit: Chabad.org/News.