(September 12, 2021 / JNS) Thousands of people took part in the Sixth Hungarian ‘Cholent Festival’ (“Sólet” in Hungarian) at the Újbuda outdoor theater in Budapest before the start of the High Holidays, organized by the Chabad Lubavitch organization Association of Hungarian Jewish Communities (EMIH).

Jews and non-Jews alike gathered for the Aug. 29 festival, which was first held in 2015 and has since come back after a hiatus last summer due to restrictions imposed to curb the spread of the coronavirus.

Cholent is a slow-cooked meat stew that simmers overnight, often made by observant Jews in accordance with the laws that prohibit cooking on the Sabbath. It is traditionally served for Shabbat lunch and contains whole eggs in their shell, meat, beans, potatoes, barley and spices.

“We love this food,” said festival-goer and Budapest resident Lili Erdos, who brought her family to the event. Erdos, whose Hungarian father’s side of the family was Jewish, does not identify as such but “loves to learn about and is interested in Jewish traditions.”

Anna Harmath and Balazs Haragh, each 25, also came to the festival because they “love the food.”

Two years ago, Harmath—a then-horticulture student at a nearby university—attended with her parents to try the dish and returned this year to take her boyfriend to sample the hearty stew. Haragh, who is studying law at a local university, noted that the dish has a Hungarian taste to it. Until he first came to Budapest at age 19, he told JNS that he had never seen a Jewish person; recently, he has learned more about Hungary’s “interesting Jewish past.”

Last summer, the couple visited the former Jewish synagogue in Mád. “It was wonderful,” said Haragh. “We learned that before the Second World War, there was an enormous Jewish community in Hungary.” 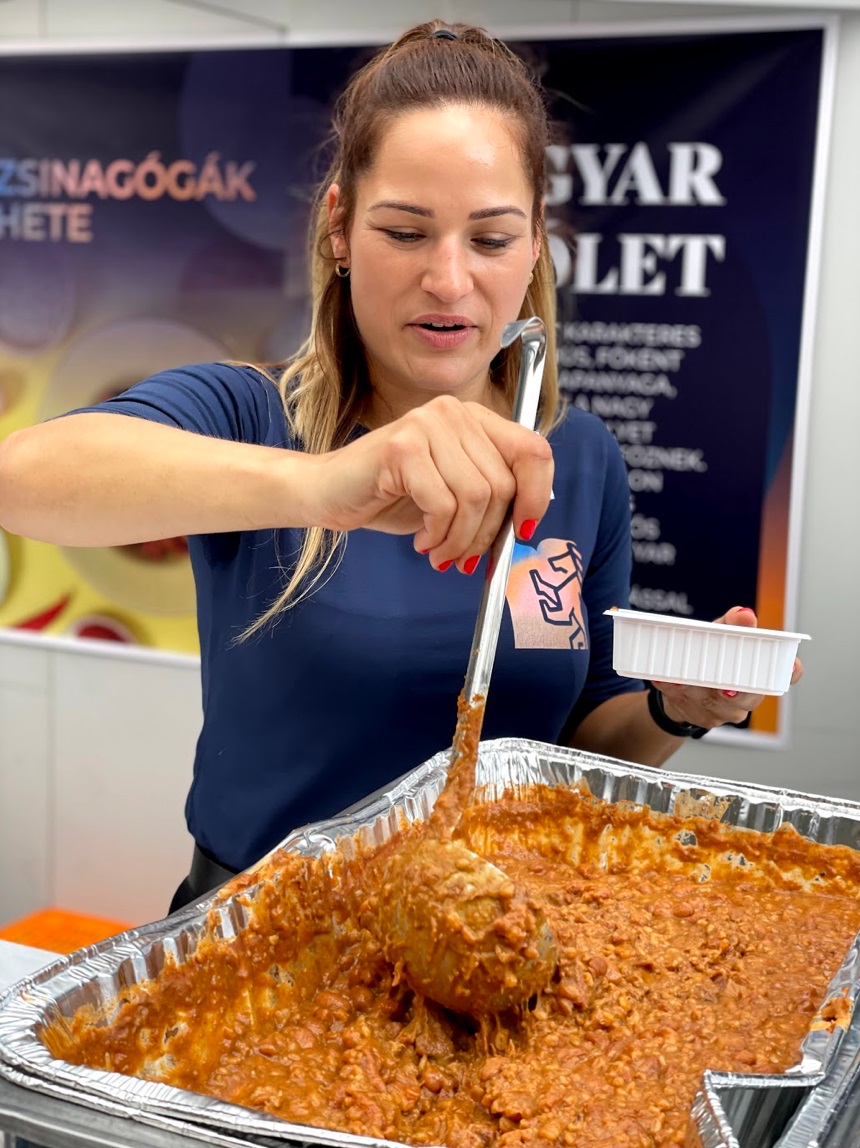 A woman serves Hungarian cholent at the Cholent Festival in Budapest, Hungary, on Aug. 27, 2021. Photo By Eliana Rudee.

“I wish I knew more about Jewish culture,” Harmath told JNS. “In my [current setting], there are some Jews, and I learn from them. I find it sad that I don’t know them enough, and that here in Hungary and Europe there are not a lot of Jewish people. I wish there were more,” she said.

Though Haragh’s town in the Hungarian countryside has an old synagogue and Jewish cemetery, he said was abandoned “and nobody cares about it … it disappeared like the Jewish people in Hungary, sadly.”

According to a 1941 census, Hungary had a Jewish population of 825,000, less than 6 percent of the total population. Nearly two-thirds—as many as 568,000—perished during the years of World War II and the Holocaust, the majority in the final year of the war, one of the last major European Jewish populations to be rounded up by Nazi Germans.

Between December 1944 and the end of January 1945, the fascist Arrow Cross Party installed in Hungary at the time took as many as 20,000 Jews from the ghetto in Budapest, shot them along the banks of the Danube and threw their bodies into the river. A monument called “Shoes on the Danube Bank” pays homage to the victims.

‘A great way to build a bridge’

Chabad-Lubavitch emissary Eliezer Nogradi, who invited Jewish festival-goers to wrap tefillin, estimated that 30 percent to 40 percent of the festival participants were Jewish. The non-Jews among the crowd have nevertheless shown “respect and interest,” he related. The Jews, he told JNS, are still “careful about being Jewish outside, some are even scared to tell their children … they have fear after the Holocaust and communism.”

However, Nogradi urged, “Be proud about your Judaism and be brave. It’s getting better, and we are building it back like before the war.”

This was precisely the message that EMIH head Rabbi Shlomó Köves wished the festival to express. “Because of the cholent festival, we have made Jews feel at home and safer,” he told JNS. “Twenty years ago, ‘Jewish’ was a word you’d say quietly and at home.” 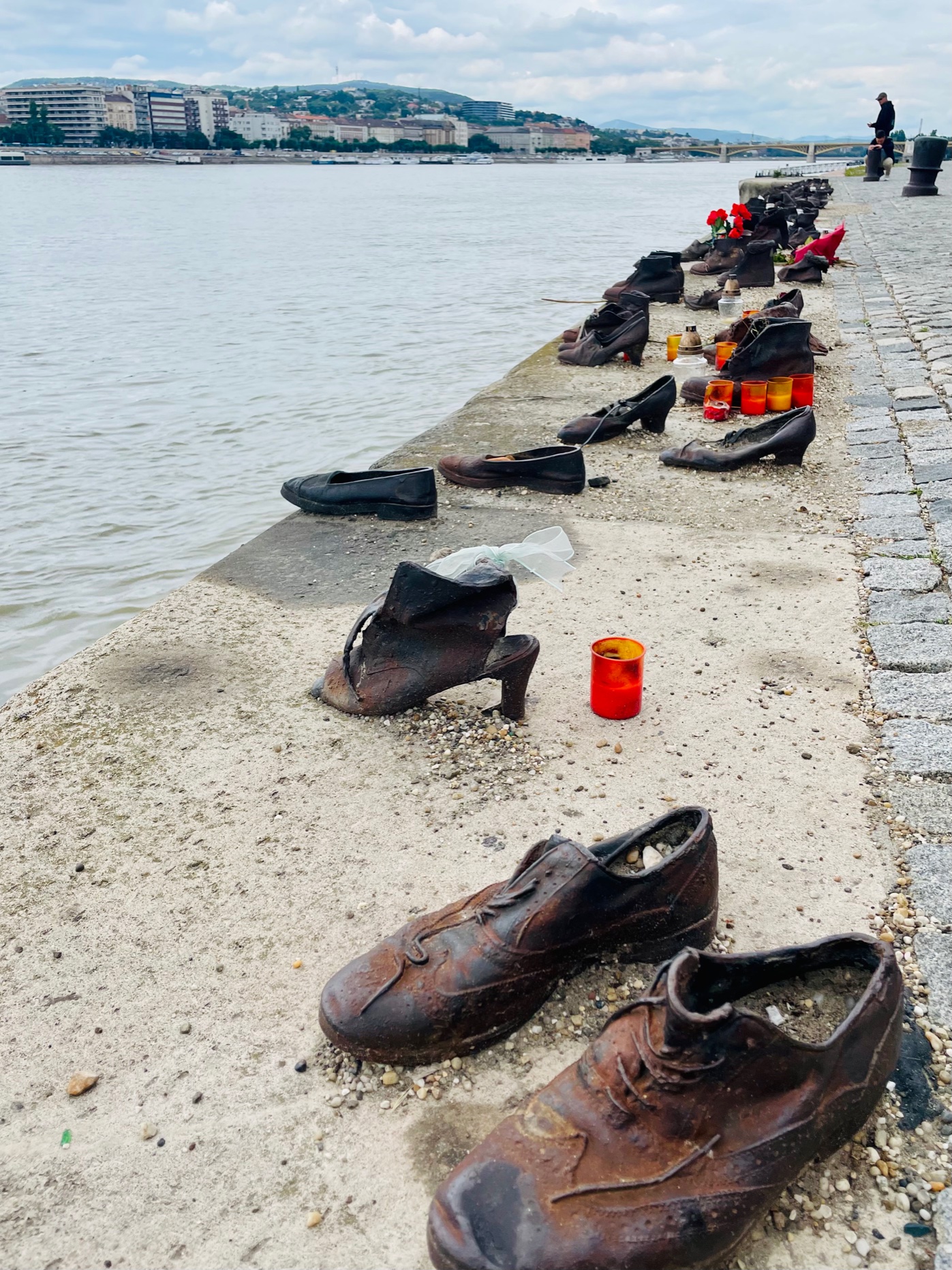 “Shoes on the Danube Bank,” a memorial erected on April 16, 2005, in Budapest, recalls as many as 20,000 Jews who were shot and dumped into the river by members of the Arrow Cross Party that ruled Hungary during World War II. Photo By Eliana Rudee.

To this end, the community has also run a billboard campaign in Budapest declaring, “It’s good to be a Jew,” with Köves seeing “a huge change in the public over the last 20 years, back when we couldn’t have made such a festival.”

The cholent festival, he continued, “Gives Jews strength and chance to connect” in a space where it is easier to “take the first step” into the Jewish community without sticking out, all while “softening the connection with the larger [non-Jewish] society—a great way to build a bridge.”

And while Köves maintained that the pandemic has impacted the organization’s funding and activities, the cholent festival was an auspicious way to “welcome people into the community, and build connection and awareness before the High Holidays.”

By mid-day, more than half of the 6,000 portions of kosher cholent were sold. The festival offered hundreds of pounds and several varieties of it—vegan, Hungarian, Israeli, Tunisian. The festival also featured live performances by Chassidic rapper Nissim Black, an American who made aliyah, and English singer/songwriter Alex Clare, who also lives in Israel.

As one of the highlights of the cultural festival, the new Torah scroll for the Bocskai Street Synagogue was also completed. Hundreds accompanied the Torah early in the evening to the nearby synagogue, which was officially inaugurated. The last time so many people gathered there, say locals, was perhaps only 85 years ago when the synagogue was first inaugurated.

At the synagogue, Köves emphasized that it is uplifting that, as the event showed, “we can live freely and proudly as Jews in other districts of Budapest as well.”

Dr. Imre Laszlo, mayor of Budapest’s 11th district, which includes the Újbuda outdoor theater and synagogue, added: “There is no Hungarian history without Jewish traditions.” 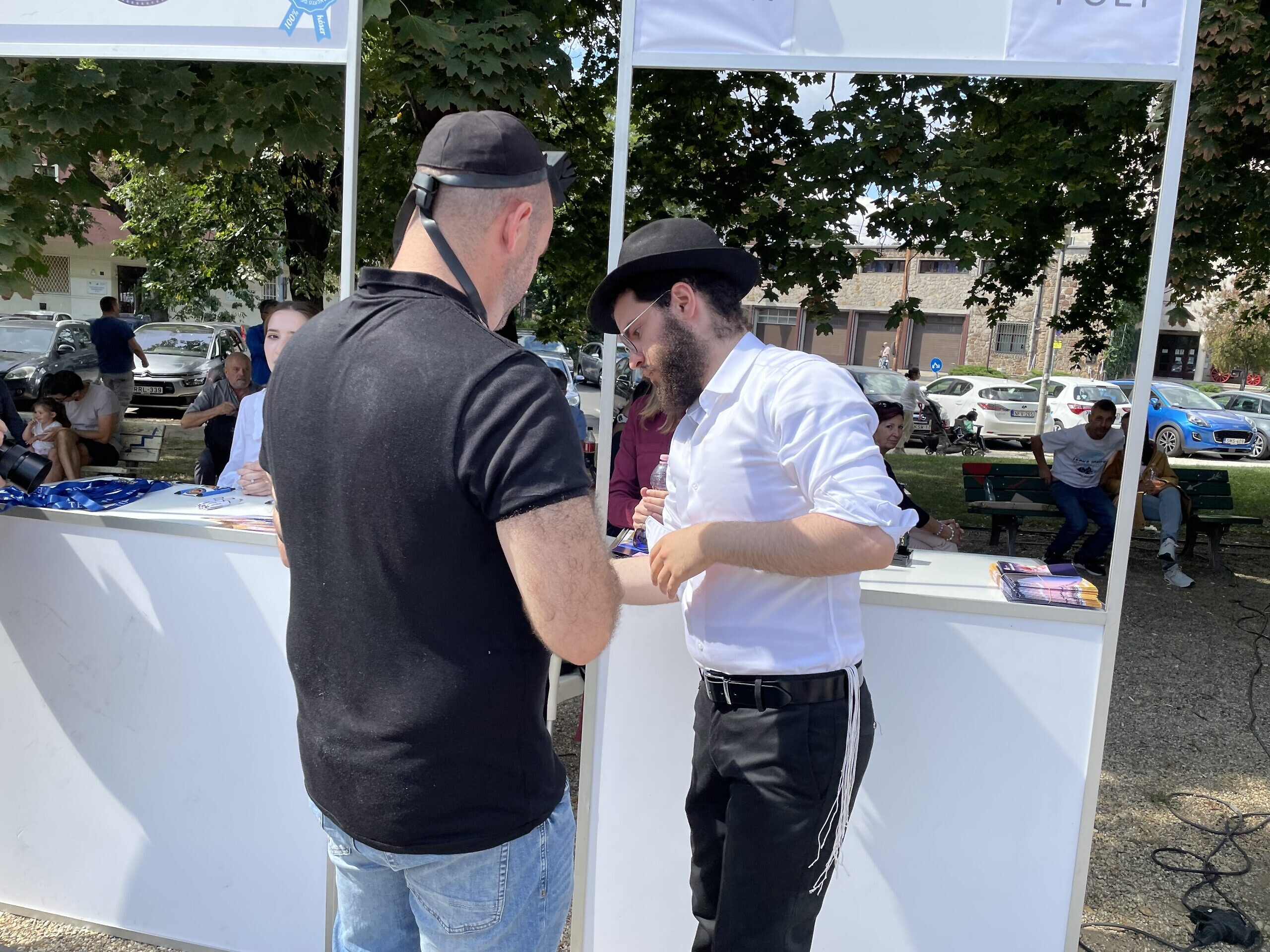 Wrapping tefillin at the Cholent Festival in Budapest, Hungary, on Aug. 27, 2021. Photo By Eliana Rudee.
Republish this article in your newspaper or website