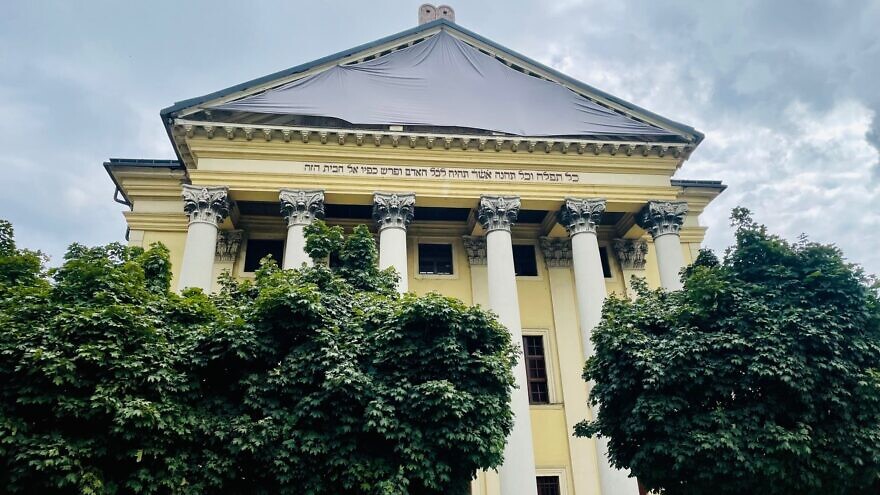 The cooperation represented a series of events to restore religious Jewish life in Hungary.

On Aug. 27, the community celebrated the bicentennial of the Óbuda Synagogue, which was recently restored after the Communist regime used it as a television station. “For 200 years, the synagogue had no Jewish star on the synagogue, and now, Star of David will return,” Rabbi Shmuel Glitsenstein, an Israel native and Chabad-Lubavitch emissary in Budapest, told JNS.

That same day, residents of nearby apartment buildings watched from above as several hundred Orthodox men danced in streets of Budapest carrying a Torah into the 50-seat Vörösmarty Street Prayer House after affixing a mezuzah to the door. Together with some nonobservant Hungarian Jews, and led by EMIH head Rabbi Shlomó Köves, the community prayed at the newly minted shul as Shabbat came in—a first in nearly four decades. 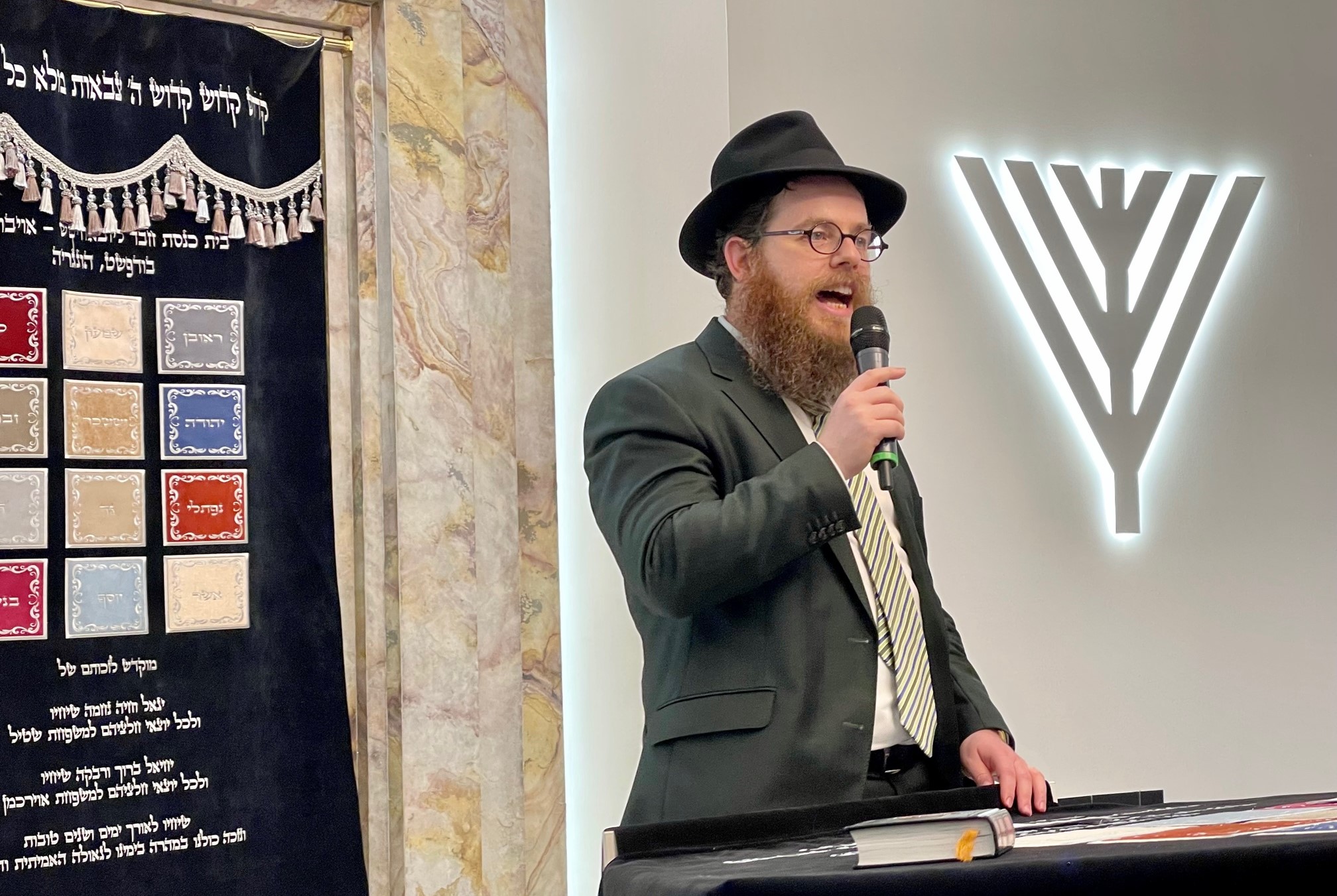 Before World War II, the Vörösmarty synagogue, Köves told JNS, was a representation of “vivid Jewish life,” with two minyanim taking place every morning and on Shabbat, symbolizing the “strong Jewish life” in Budapest at the time. Opened in 1908 as a family synagogue, it was closed in 1983 due to lack of activity.

The Vörösmarty synagogue is now owned by MAOIH but operated by EMIH, as MAOIH’s community is very small. “Opening this synagogue will bring more congregants who are looking to become more involved in Jewish life,” said Glitsenstein.

Likewise, expressed Köves, saying “with every shul we reopen, there are new people coming. Rededicating historical synagogues [represents] the Jewish value and obligation of honoring and respecting our heritage. Every place like this is a sign of ‘Am Yisrael Chai’ (‘the Jewish people live’).” 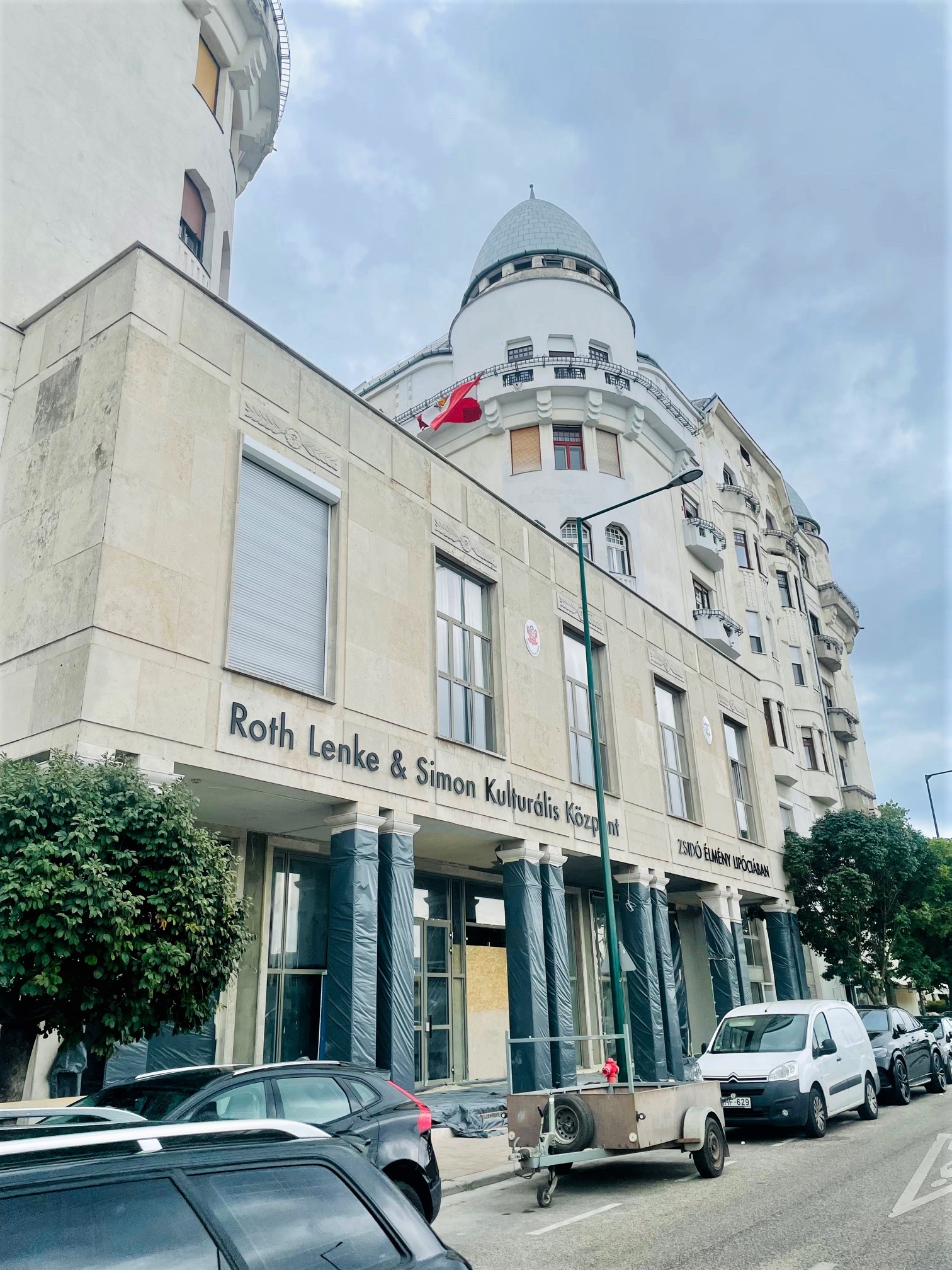 Two days later, on Aug. 29, the traditional Sólet (Hungarian cholent) Festival, including a concert featuring international stars Alex Clare and Nissim Black, also took place at the Újbuda Park outdoor theater. In addition to the gastronomic experiences, there were children’s and cultural programs, including a klezmer music production. From the festival, celebrants carried a newly dedicated Torah scroll to the nearby Újbuda shul, which was reopened to the public after more than 70 years. The Bauhaus-style building, with 200 seats, is also owned and operated by EMIH.

“It is a [testament] to the human spirit to rebuild it … the past came back so this could be a synagogue again,” Dr. Imre Laszlo, mayor of Budapest’s 11th district (which includes Újbuda), told JNS.

Another speaker noted, “This synagogue is evidence of the Jewish community that is now being revived. We admire its beauty and hardships, representing the Budapest Jewish community’s past, present and future.”

The same day, EMIH also returned the Bocskai Street Synagogue to the community. The synagogue, able to accommodate 1,000 people, opened its doors in 1936; before the war, it was the last opened synagogue in the capital. In 1944, the Germans converted it into a warehouse and used it as a stable during the siege of Budapest.

In addition to the shuls that have been restored, a massive renovation of the ZSILIP community center near Budapest’s Danube River has been completed in Újlipótváros, opening for Rosh Hashanah, with a play area for children, space for learning and gathering for young adults, and a Sunday school built for 150 children.

‘Reclaiming of Jewish history in Hungary’

Over that last weekend in August, several speakers compared the communal resurrection to the prophetic vision of the Valley of Dry Bones, described in Ezekiel 37. In his vision, Ezekiel sees himself standing in a valley full of dry human bones, and before his eyes, the bones are resurrected into flesh—a prophecy that the bones of Israel will be revived.

As such, Businessman Robert Deutsch, who was elected as president of MAOIH this year, told reporters that when he entered his office space, the building was collapsing and the books in disarray, much like the community itself.

Through the collaboration with Chabad, however, MAOIH is rebuilding its offices—Deutsch was especially proud of their newly refurbished antique clocks that began to ring again as if “time started again”—a “reclaiming of Jewish history in Hungary.”

Until today, Köves explained, much of Jewish identity in Hungary was Holocaust-related with so much “deep trauma of betrayal from local society,” that most Hungarian Jews decided to “cut ties with Jewishness”—a cut that has taken three generations to heal. 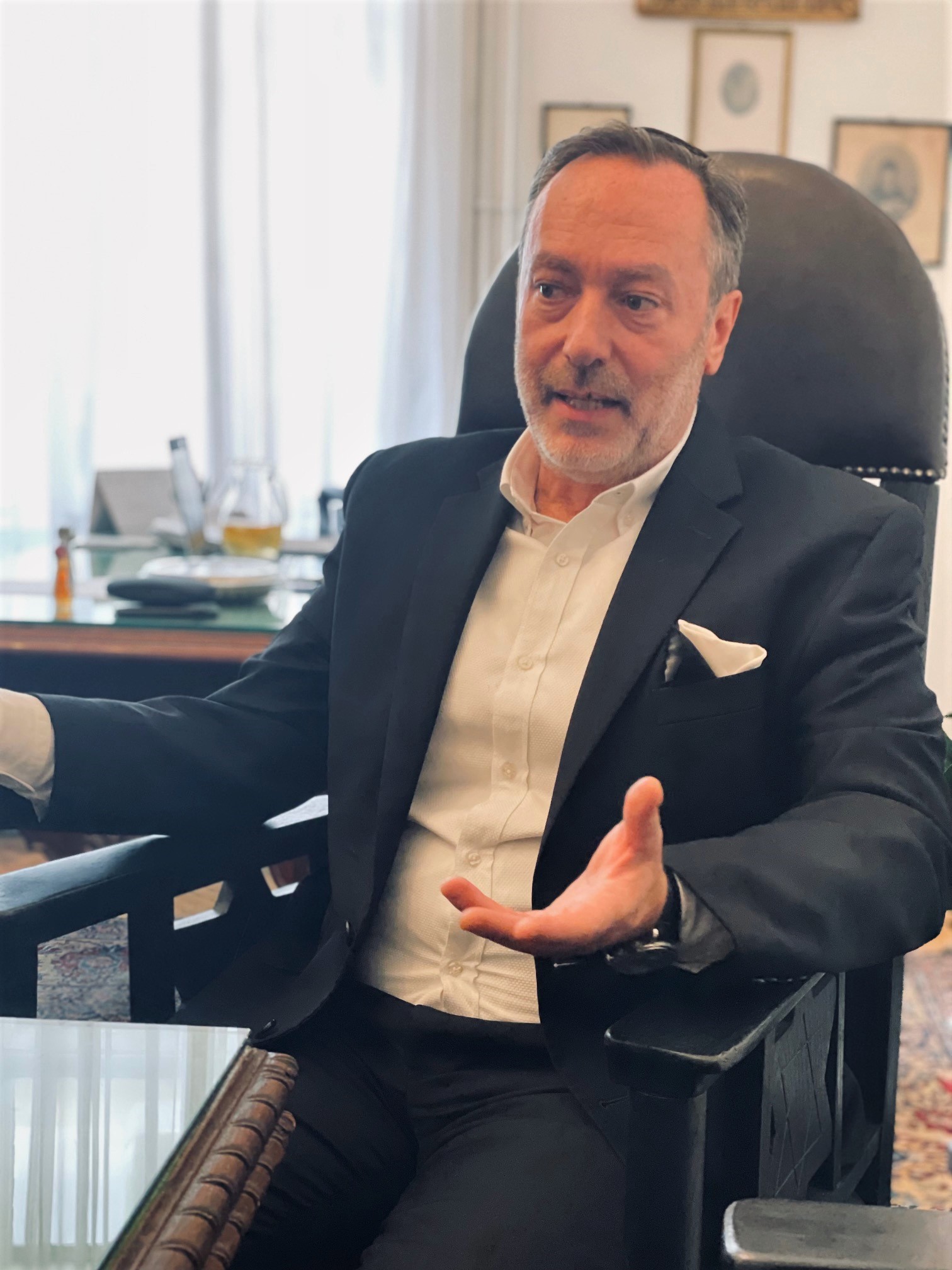 Köves’ father, he explained, entered a synagogue for the first time on the holiday of Simchat Torah, when he found himself shocked to witness Jews dancing with a Torah and expressing joy. Many Jews, like Köves’ grandparents who originally “had strong convictions that their children should marry non-Jews,” felt it would be better that the Jews “complete their assimilation” into Hungarian culture. “To say you were a Jew in public or ask someone if they were a Jew was not accepted 20 years ago,” said Köves, who became observant after studying under Hungary’s Rabbi Baruch Oberlander, and later, at a Pittsburgh yeshivah.

Today, many of the 80,000 to 140,000 Jews in Hungary are just now learning of their Jewish past, previously hidden after years of extermination and then Communist oppression.

“In 1998, 70 percent of Jews were found to be less religious than their parents, and today, we see the exact opposite, where 70 percent are more religious than their parents,” maintained Köves, who acknowledged that 96 percent to 97 percent of Hungarian Jews are not affiliated at all. “We must give opportunities for people to reconnect. There is no other country with so many unaffiliated Jews.”

Where there were once 150 synagogues in Budapest, according to Köves, there are fewer than two dozen, owned by several organizations including EMIH, MAOIH, Mazsihisz (a neolog community, similar to Conservative Judaism), as well as progressive organizations Szim Salom and Bet Orim. Each has its own ideologies and funding, resulting in an often-tense relationship that has involved lawsuits over allocation of government reparations from properties lost during the Holocaust and destroyed by the Communists.

“Competition is good in business; companies will sleep otherwise, which hurts consumers. The important thing is that Jews are coming back to Yiddishkeit,” quipped Glitsenstein.

“If there are 100,000 Jews here today, we must have at least 70 synagogues,” added Köves. “Having the opportunity to allow people to connect to their heritage is a zchut (‘merit’). I feel this is something that is a life mission for me … and I am very excited to fulfill this mission.” 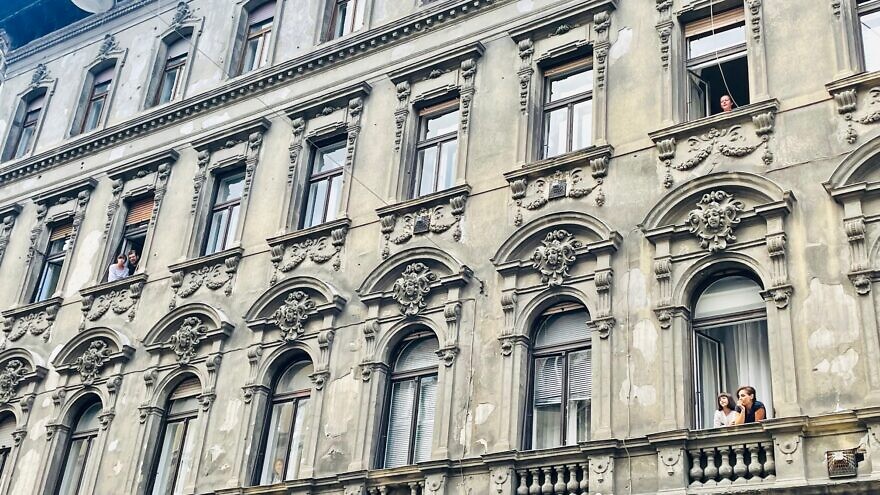 Onlookers watch from their apartment building in Budapest as members of the Jewish community dance with the Torah scroll into the Vörösmarty synagogue, Aug. 27, 2021. Photo by Eliana Rudee.
Republish this article in your newspaper or website