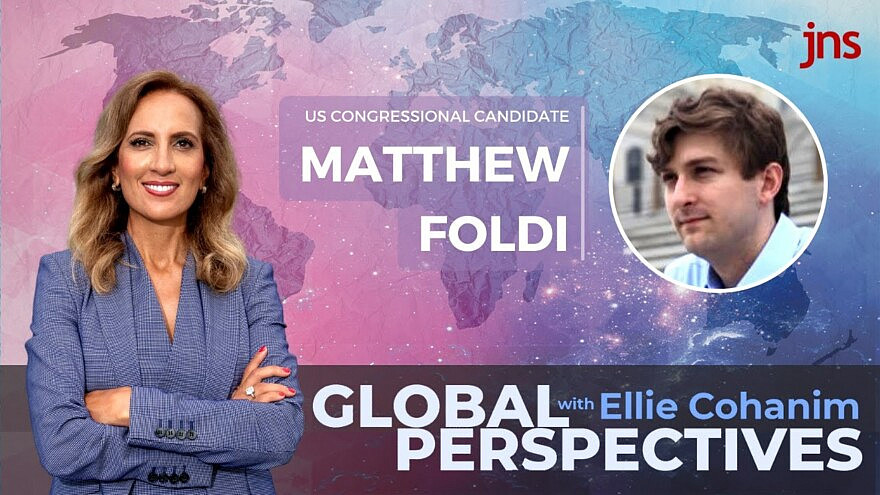 (May 17, 2022 / JNS) Why is the United States funding Russian oil while calling Russian President Vladimir Putin a war criminal? Why is the Democratic Party rushing to give Iran as many nuclear weapons as it can, as fast as possible?

These are some of the questions Matthew Foldi is asking.

The 25-year-old Jew from Maryland, a graduate of Jewish day school, is running for Congress. If he wins, he’ll be the youngest member of the U.S. House of Representatives.

In this week’s “Global Perspectives with Ellie Cohanim,” Foldi explains why he’s running for office.

“For me, it’s the failures of the octogenarian Democrats who are currently running this country,” says Foldi. “Joe Biden, Nancy Pelosi have no connection to the problems that their failed policies are causing. They’re completely disconnected from the supply chain crisis, from the price of gas, the lack of groceries. … And I think it’s about time for a new generation to finally take charge of this country and flip the house, and then flip the White House in two years from now, as well.”

The Biden administration is destroying the American economy while it invests in Russia and Venezuela at Americans’ expense, says Foldi.

Moreover, he adds, the current administration is failing to tackle growing anti-Semitism.

“It is sometimes physically dangerous to be a pro-Israel activist or simply to wear a kipah out in public,” Foldi, who was beaten up while protesting an anti-Israel rally, tells Cohanim. “The Department of Justice right now is busier investigating parents concerned with school board curricula as domestic terrorists than it is looking at actual anti-Semitic hate crimes than happened in this country.”

“This fight is about everyone’s generation in the present, but it is also about the future because the people running the country have no stake in its future,” he says.