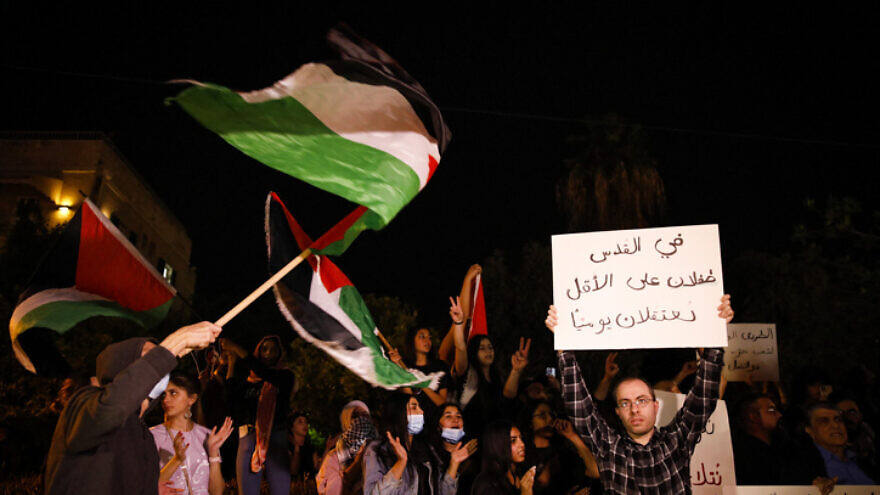 (April 21, 2022 / JNS) Tensions between Israelis and Arabs have increased in recent days as unrest ensues on the Temple Mount in Jerusalem’s Old City, which has been a hotbed over the years, especially during the confluence of Passover and Ramadan.

The pressure has only risen after a string of terror attacks in major Israeli cities in the lead-up to the holiday period, which many Israelis viewed as the start of another intifada.

Amid this, the United Arab List political party (known in Israel by its Hebrew acronym Ra’am) announced that it has suspended relations with the Israeli government coalition on Sunday, dealing a potentially fatal blow to Israeli Prime Minister Naftali Bennett’s tenuous government. This move comes as the Arab-Israeli sector is reacting to the violence in Jerusalem. Last week, Ayman Odeh, the head of the Joint List block of Arab Parties, called on Arab-Israeli members of the security forces to resign.

Speaking in Arabic from Jerusalem’s Damascus Gate, Odeh called on Arab Israelis to avoid joining Israeli security forces and told those already enlisted to “throw the weapons in their face,” according to Israel’s Channel 12.

Yet the Arab-Israeli sector has an ever-increasing high standard of living. So why are their leaders hostile towards the state that has allowed them to flourish?

A recent report shows an increase in higher education and employment among Arab women. Nevertheless, crime rates continue to be high. And Arab-Israelis continue to elect radical leaders who work against the state.

So how can the two positions be reconciled: radical political views matched with what appears to be modernization?

The answer is culture. Modernization has not led to Westernization.

In The Clash of Civilizations and the Remaking of World Order, Samuel Huntington stated: “As the pace of modernization increases, however, the rate of Westernization declines and the indigenous culture goes through a revival.”

Thus, despite apparent advances on the economic front, there still is a tribal and religiously based opposition to the state.

Amid a wave of Palestinian violence, the Arab Israeli political parties have hedged their position by condemning the violence out of one side of their mouths and rationalizing it from the other.

For example, Sami Abu Shehadeh, head of the Arab nationalist Balad Party—part of the Joint List—tweeted in Hebrew on April 9: “Only a just political solution and an end to the occupation are a guarantee for a safer and better future for all of us.”

In other words, it is Israel’s fault for the recent massacres and violence perpetrated against innocent civilians. Yet these attempts by Arab-Israeli leaders to condemn the attacks while at the same time justifying them are not gaining trust among the country’s Jews, which are purchasing firearms at record rates.

Earlier this month, the number of Israeli civilians applying for firearm permits reached an all-time high.

The Arab parties condemned the acts, “but Hadash said that the root of all evil is the Israeli occupation of the 1967 Palestinian Territories,” Arik Rudnitzky of the Israel Democracy Institute and Tel Aviv University’s Moshe Dayan Center told JNS.

Asked about the Islamic Movement’s presence in the government and if he sees the party leaving because of the latest attacks, Rudnitzky replied: “I don’t think it will affect their decision to stay in the government.”

The southern branch of the Islamic Movement’s Ra’am Party is part of the governing coalition, represented by Knesset member Mansour Abbas. Its northern branch has been outlawed by the Israeli authorities since 2015.

The Islamic Movement has followed a pragmatic line that seeks to put a friendly face on the movement. Nonetheless, it is an offshoot of the Muslim Brotherhood, just as the Hamas terror organization is in the Gaza Strip. Abbas hopes that participation in the coalition government and tangible achievements for the Arab sector will gain its popularity and clout.

‘We all must live and die for the country’

Sheikh Maufak Tarif, head of the Druze community in Israel, told JNS that “terrorism has once again sadly returned to the streets of Israeli cities, and is trying to raise its head and intimidate the citizens of the country.”

Tarif was adamant that the terror attacks must be condemned: “Our hearts go out to the families of those killed and hope for the recovery of the wounded. I am confident that the security forces will know how to restore calm to the cities of Israel.”

While most Arabs in Israel are Muslim, significant minorities do not follow the general anti-Israel narrative.

“The Druze community lost a dear young man, the heroic Border Police officer Yazan Falah, in the terrorist attack in Hadera. He paid the price for the state and its security,” he added.

Falah, from the Druze village of Kasra-Samia, was 19 years old.

These killers “should be condemned and their supporters shunned,” said Tarif. The public must work together, Arabs and Jews alike, for coexistence, said the Druze leader, adding “we all must live and die for the country.”

There was a second example of an Arab defending the state against Palestinian terrorism in the haredi city of Bnei Brak. Amir Khoury was a Christian Arab police officer killed while responding to the terrorist attack there on March 29. The city of Bnei Brak decided in recent weeks to name a street after him, the first non-Jew to receive such an honor.