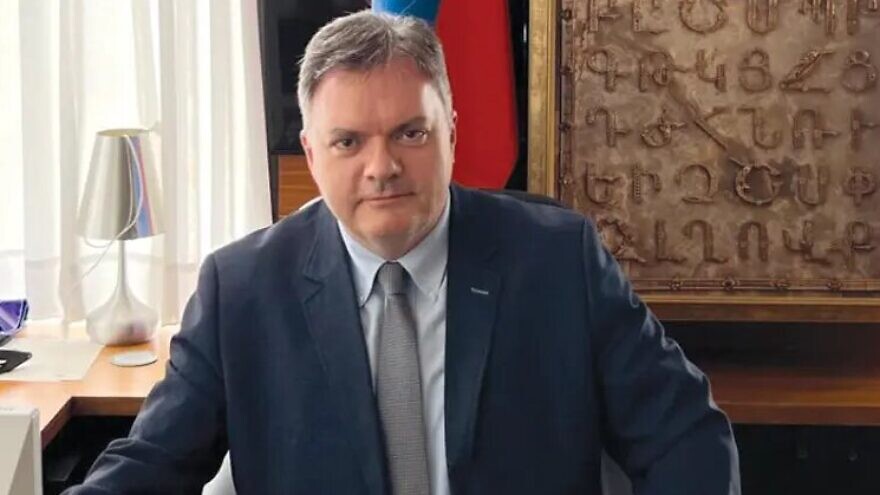 (December 11, 2022 / JNS) He has a Ph.D. in Semitic linguistics and speaks no fewer than seven languages.

Still, when Arman Akopian first visited Israel two and half decades ago as a young diplomat accompanying his foreign minister on an official visit, he was taken aback by the omnipresent Hebrew spoken by the local kids.

“When you study in Semitic languages you see things in historical perspective,” the longtime lecturer in Arabic, Hebrew and Syriac/Aramaic studies at Yerevan State University recounted. “And there they were so small and already speaking Hebrew.”

Now Akopian is back in Israel as Armenia’s ambassador, its second since the country first opened its Tel Aviv embassy two years ago.

This time the 57-year-old veteran diplomat with the unusually good Hebrew is no longer surprised by the language of the Bible but can discourse in it.

At ease in his simple but well-decorated Tel Aviv embassy office during an interview with JNS, Akopian adroitly focuses on the common bonds between Armenians and Jews, even though his position inevitably includes a dance of realpolitik.

As the first nation to adopt Christianity as its state religion in 301 and with a presence in the Holy Land dating back more than 1,500 years, Akopian calls Armenia a “natural landscape of the country.”

The ambassador readily expounds upon the traits shared by Armenians and Jews: both ancient peoples who went through modern tragedies—the Holocaust and the Armenian Genocide—with a large Diaspora; both intellectually-oriented and tech-focused peoples with small countries that are bordered by Muslim nations.

Indeed, American Jews were very supportive of the official US recognition last year of the Armenian Genocide of 1915-17, even as Israel hesitated to make such an official declaration due to regional turbulence with Turkey. The Maryland-sized country of three million is home to only a couple of hundred Jews, while several hundred more have arrived in the recent wave of 70,000-80,000 Russians who fled their country to Armenia due to the war with Ukraine. Yet when Armenians speak of Jews, it is a strong, emotionally charged word that translates to “of the same fate,” the ambassador said. 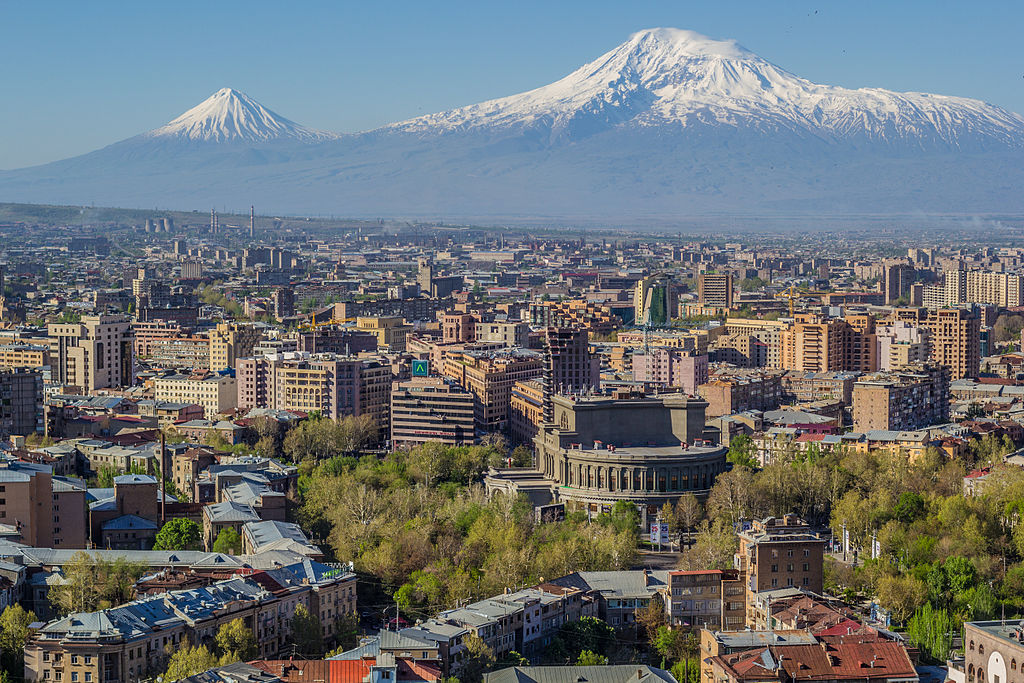 Akopian yearns for more tourists from the two countries to explore the other’s society—“people diplomacy” as he calls it, citing the newly inaugurated weekly flights between Tel Aviv and Yerevan as a first step in that direction. Still, an aviation agreement between the two countries has yet to be reached, with the Armenians balking at Israeli security demands, a reason the Israir Airlines-run flights are operated by other carriers.

Akopian acknowledges that serving as Armenian ambassador to Israel is “challenging, exciting and difficult.”

“It’s not an easy country for a diplomat,” he said.

The reason for this boils down to two countries: Israel’s arch-enemy Iran, and Armenia’s arch-enemy Azerbaijan.

Two years ago, just months after opening its embassy in Tel Aviv, Armenia recalled its ambassador, angered at Israeli arms sales to oil-rich Azerbaijan during a 2020 war between the two ex-Soviet countries. At the same time, Israel has warily watched as Christian Armenia becomes an ever-larger trade partner of the Islamic Republic, even as Yerevan professes a desire for good ties with the Jewish state.

This intricate chessboard of geopolitics has strained if not damaged Israeli-Armenian ties as the countries juggle their interests in the region.

For Israel, ties with Muslim Azerbaijan—which shares a border with Iran—are of strategic importance, as a conduit for reconnaissance (25% of the Iranians are in fact Azeris) but also because it supplies Israel an estimated 40% of its oils needs and is a leading purchaser of Israeli military hardware, particularly drones. Over a decade ago, then-Foreign Minister Avigdor Liberman famously quipped that “Azerbaijan is more important for Israel than France.”

Armenia has been locked in a decades-old conflict with Azerbaijan over the mountainous region of Nagorno-Karabakh, which is part of Azerbaijan but with a majority ethnic Armenian population who, backed by Armenia, have controlled the area since a 1994 separatist war. Azerbaijan regained part of the territory in the 2020 conflict, and a fragile truce brokered by Russia remains in place despite a renewed burst of violence this fall.

The Armenian ambassador says he is hopeful that a peace treaty will be worked out between the longtime arch-enemies, citing the landmark 2020 Abraham Accords between Arab countries and Israel as a case in point.

Peace with Azerbaijan is a matter of when not if, Akopian said.

“We are neighbors. We have no other option but to sign a peace agreement,” he said.

In the meantime, however, Armenia—which also borders Iran and has been feeling a cold shoulder from a Russia busy with war in Ukraine—has been buttressing its trade with the Islamic Republic, which has reportedly gone up more than 40% this year alone. The two countries seek to increase total annual trade to $3 billion, Iranian President Ibrahim Raisi said during a November visit to Tehran by Armenian Prime Minister Nikol Pashinyan. These reports set off alarm bells among Israeli officials.

Nevertheless, the ambassador seeks to focus on the positive in the relationship between Armenia and Israel, looking at the overarching perspective.

“Armenians see Israel as a model of development with a lot to learn from in defense, healthcare engineering and agriculture,” he said.

He once again returns to the theme of old, shared ties that bind the two peoples together.

“We have a strong sympathy for each other,” Akopian said.