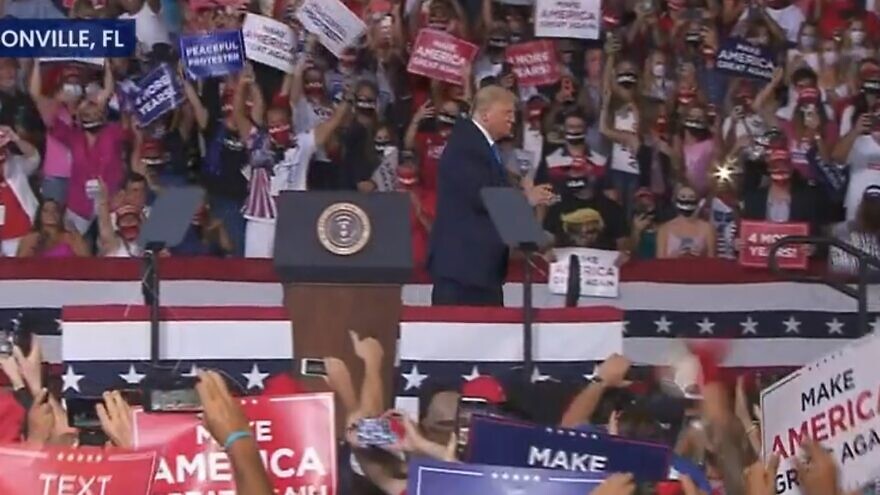 (October 9, 2020 / JNS) With the presidential race entering its final weeks, more attention is being focused on a number of critical swing states that could determine the outcome of the election. This is especially true as most national polls have former U.S. Vice President Joe Biden with a double-digit lead, leaving U.S. President Donald Trump’s re-election chances hinging on several states he narrowly won in 2016, despite losing the popular vote.

For the Republican Jewish Coalition, which seeks to re-elect Trump and Republicans down-ballot, this means reaching out to Jewish voters in “Florida, Florida, Florida,” the organization’s executive director, Matt Brooks, told JNS.

The Sunshine State is home to an estimated 650,000 Jewish residents.

While RJC’s “significant focus” is on the presidential race, the organization has also been “involved in independent expenditures to help several [U.S. House of Representatives] and [U.S.] Senate candidates who we’re supporting, and we’re about to announce another independent expenditure for a different race that we’re going to jump into,” said Brooks.

The RJC has endorsed 70 candidates, including Trump.

“In terms of top lines, we commenced our TV ads, augment our existing significant digital presence with a $3.5 million ad buy that started last week,” said Brooks, while mentioning that his organization’s grassroots volunteers have made more than 400,000 specific voter contacts to “likely Trump voters and persuadable Trump voters” in those critical battleground states, which have also been targets for at least 500,000 pieces of mail content.

The RJC is not doing any calls for the House and Senate races, said Brooks, citing that campaigning for those races is being done with mail, digital and television ads.

The RJC Victory Fund, the super PAC of the Republican Jewish Coalition, released an ad last week featuring a man acting as a salesman warning about “the radical left” having “lots of influence” on “raising taxes, defunding police, pressuring Israel and more” if the ticket of former U.S. Vice President Joe Biden and California Sen. Kamala Harris wins.

The salesman actor in the “special offer” ad—in the style that goes along the lines of “buy one, get one free”—states that those policies are part of “the deal of the century: elect one old liberal, get fresh, even more liberal, ideas free. This deal, like their policies, is f***ing insane.”

The ad ends with the salesman actor throwing away money as the words “Electing Joe Biden and the radical left: Insane!” flash across the screen.

On the other side of the aisle, Jewish Democratic groups are seeking to push Biden and Harris over the finish line, especially with virtually all polls, including in swing states, showing Biden ahead of Trump, in addition to the group campaigning for Democrats down-ballot.

“We have more than tripled the size of our staff. We have established 14 chapters in swing states,” she continued. “And we have multiple events every night to get out the vote across the country.”

The chapter leaders and volunteers have been “phone-banking and text-banking hundreds of thousands of Jewish voters.”

Along with endorsing Biden, JDCA has endorsed almost 120 House and Senate candidates.

However, JDCA has come under fire from critics due to some of its recent video ads, including an ad featuring the Jewish Mourner’s Kaddish in response to Trump’s handling of the COVID-19 pandemic, and also another comparing Trump’s America to Nazi Germany, which was condemned by several Jewish and pro-Israel organizations, including the American Jewish Committee.

Meanwhile, other pro-Biden Jewish groups have kicked into high gear in the final weeks.

The political action committee of Democratic Majority for Israel, DMFI PAC, is currently airing an ad in Florida that features background audio of Biden emphasizing about his commitment to enhancing the U.S.-Israel relationship, along with quotes from U.S. and Israeli officials praising Biden for his stances on the alliance, DMFI told JNS.

The ad is running on digital and streaming platforms, and will air in other battleground states, she said.

DMFI’s supporters have been phone-banking for Biden, calling swing voters in Florida and Pennsylvania—two crucial states that went for Trump in 2016.

The organization is running “an extensive paid and organic social-media campaign, communicating information about Biden and other Democratic candidates,” said the group.

While not explicitly a Democratic Jewish or pro-Israel group, the political action committee of J Street, JStreetPAC, is supporting only Democratic candidates, including Biden, along with, as J Street told JNS, “helping to elect a pro-Israel, pro-peace majority in the Senate” and “defend” the more than 30 “House freshmen endorsees whom we helped elect in 2018.”

“During this unbelievably high stakes of this election, J Street is also focused on defending our democracy and the integrity of our electoral process. In the face of extremely dangerous comments and threats from President Trump, we joined with over two-dozen Jewish organizations to speak out against the rise of far-right extremism and white supremacy,” said the group.

Bipartisan Jewish and pro-Israel groups have also made moves in the final stretch of the election cycle, though the following groups are not endorsing a presidential candidate.

NORPAC is not endorsing a president. But it has hosted at least 40 events this year, mostly virtual, with congressional candidates on both sides of the aisle, doing two or three events weekly (now all virtual) in which those with candidates count as endorsements, the group’s national president, Ben Chouake, told JNS.

NORPAC has spent almost $1.76 million between January 2019 and August of this year, according to the FEC.

Pro-Israel America has similarly not endorsed or campaigned for a presidential candidate. Still, it made nearly 80 endorsements of both Democratic and Republican House and Senate candidates, and has raised more than $3 million for them.

The endorsements are of “pro-Israel congressional candidates [from] both sides of the aisle who have proven track records” as it pertains to the U.S.-Israel relationship through their words and actions,” its executive director, Jeff Mendelsohn, told JNS.

Despite the efforts by pro-Israel and Jewish groups during an anything but typical election season, nearly everyone expects most Jewish voters to follow the historic trend and support Biden and other Democrats.

At the same time, RJC PAC is also having record-breaking fundraising.

RJC’s political action committee, RJC PAC, has spent almost $1.48 million between January 2019 and August 2020, according to the Federal Election Commission (FEC). It’s been a “historic” and “record-setting” fundraising year for the RJC, affirmed Brooks.

JDCA PAC has spent almost $216,000 between January 2019 and this month, according to available public records.

Despite the campaign finance gap between RJC PAC and JDCA PAC, the former “may have money, but we have more votes,” said Soifer.

“Voters, as you know,” she said. “What wins elections? Votes.”