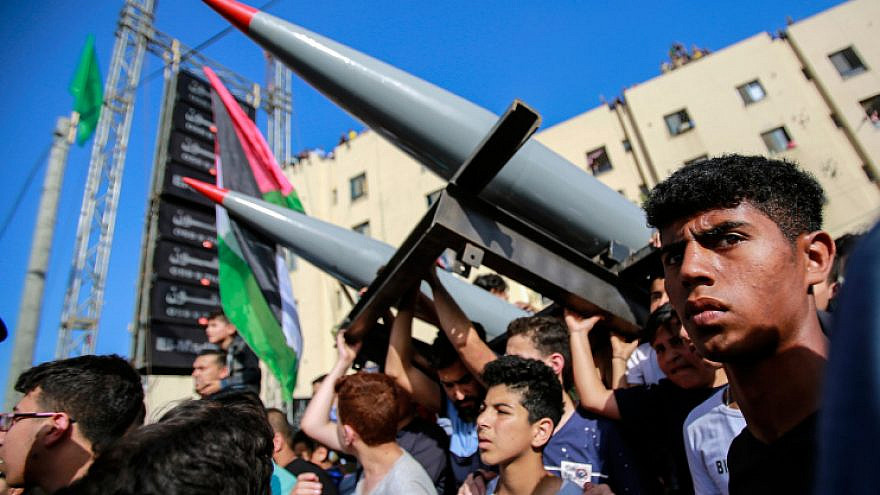 A Hamas rally in Beit Lahiya in the Gaza Strip on May 30, 2021. Photo by Atia Mohammed/Flash90.
Spread the word.
Help JNS grow!
Share now:

(May 24, 2022 / JNS) Terror factions in the Gaza Strip are preparing for the possibility of an escalation with Israel, including launching rockets, if Israel’s Jerusalem Day flag march planned for May 29 proceeds through the Muslim Quarter of the Old City as planned, Israeli media reported on Monday.

According to the report, Hamas’s military wing is now on high alert and in recruiting members, as well conducting checks of its communications systems and preparing outposts.

“This is not an idle threat,” the report quoted a Gaza source as saying.

On Monday, a senior Hamas figure threatened the terror group would launch missiles at the Jewish state during the march.

Mushir al-Masri, a member of the Hamas parliament in Gaza, said “our missiles” will “take down the [Israeli] flags” traditionally flown on Jerusalem Day, Kan News reported.

Al-Masri’s threat joins a previous threat issued by Hamas political bureau chief Ismail Haniyeh, who is based in Qatar. On Sunday, Haniyeh stated, “I warn the enemy against committing these crimes and marches. The Palestinian people will not [allow] the passage of these Jewish Talmudic fools.”