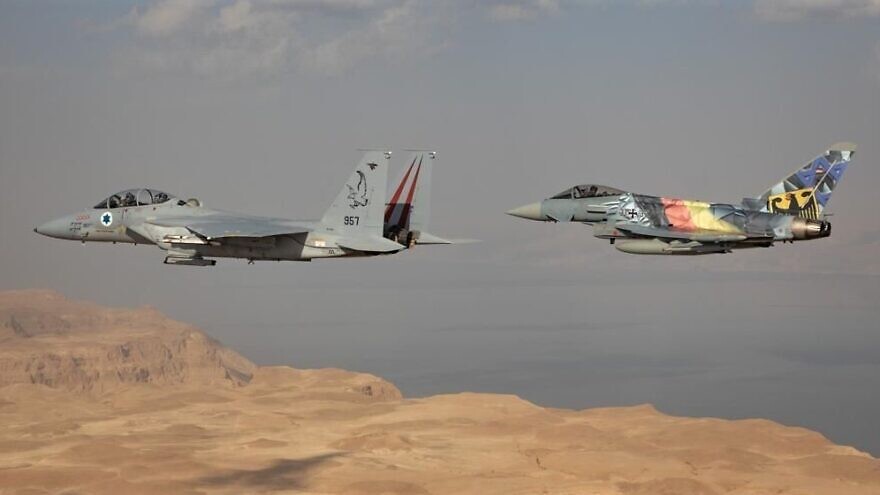 The commanders of the Israeli and German air forces performed a joint flyover in Israeli skies as a show of international solidarity on Oct. 17, 2021. Credit: IDF Spokesperson's Office.
Spread the word.
Help JNS grow!
Share now:

(October 18, 2021 / JNS) The commanders of the Israeli and German air forces performed a joint flyover in Israeli skies on Sunday in a display of international solidarity.

The flyover occurred as part of the IAF Blue Flag military aviation exercise currently being held in Israel.

“The winds of history are strongly felt throughout Israel’s capital,” said Norkin via a radio broadcast from his jet during the flyover.

The Israeli and German commanders also visited the Yad Vashem Holocaust Remembrance Center in Jerusalem, where they toured the “Flashes of Memory” photo exhibition and participated in a memorial ceremony at the Hall of Remembrance. During the ceremony, the commanders lit the eternal flame and laid a memorial wreath in honor of victims of the Holocaust.

“This visit is not the usual visit,” noted Norkin. “Last year, we did a flyover over Dachau Camp and declared, side by side: ‘Never again.’ ”