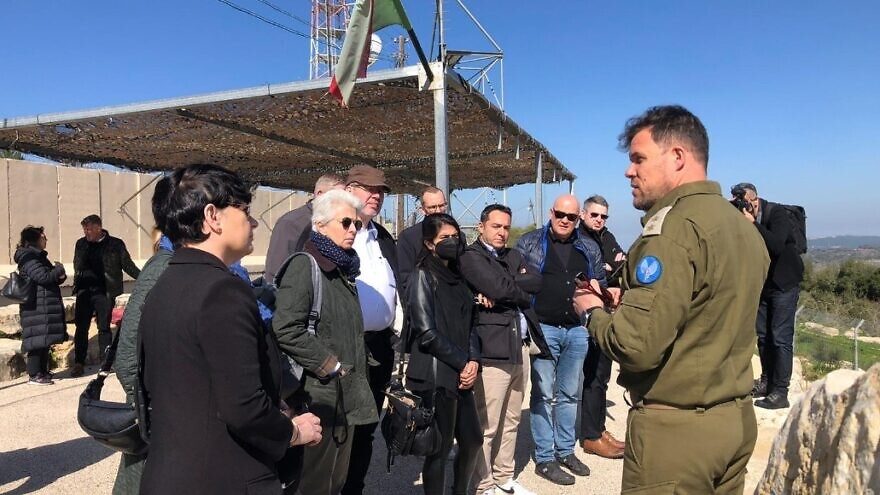 (April 1, 2022 / JNS) Germany is interested in the possibility of purchasing air- and missile-defense systems, in addition to unmanned aerial vehicles, from the State of Israel, according to multiple sources.

In recent days, a senior delegation of the German Bundestag Defense Committee visited the Israel Defense Forces as part of a wider trip to the country.

The delegation’s visit was initiated and hosted by ELNET, an organization dedicated to strengthening ties between Europe and Israel.

Delegation members expressed particular interest in the Arrow 3 aerial-defense system, which is made by Israel Aerospace Industries (IAI) and intercepts ballistic missiles in space.

Arrow 3 is operational in Israel as part of the country’s multi-tier air-defense program.

“They were very much interested in this and appreciative when we shared the best lessons that we learned from our operational experience,” an IDF official said on Wednesday.

In 2018, Germany signed an agreement with Israel to lease a number of Heron TP UAVs, produced by IAI. German Air Force personnel train with Israeli counterparts at an IAF base in central Israel in operating the systems.

They toured the Haifa Navy Base and experienced firsthand the Hezbollah cross-border tunnel system uncovered by the IDF.

The chairwoman of the Bundestag Defense Committee, Marie-Agnes Strack-Zimmermann, who is also the deputy leader of the Free Democratic Party, said: “It is unimaginable to see a tunnel being built here for five years with the purpose of attacking Israel. It’s a miracle that it was uncovered by Israel but also warns us that the enemy of the free world will stop at nothing to attack peace and these countries. We just need to know that, especially those who are naive enough to believe that nothing is happening.”

She said that “we seek to further develop the relationship with the defense sector in Israel in order to better understand how Israel handles threats and attacks. I’m taking a lot home, especially since we are in a situation where we are experiencing a war in Europe for the first time in many years, and Germany must confront it and ensure the country’s security. We can learn a lot from the Israelis and would like to collaborate more.”

The IDF official noted that “Zimmerman was kind of enough to share a lot of questions and information, and had a significant time on this IDF visit, exchanging views and ideas.”

During the visit to the Lebanese border, the delegation was briefed on multiple threats posed by Hezbollah, and Iran’s continuous proliferation of arms, know-how and funds to the Lebanese “terror military,” said the IDF source.

“Instead of investing to improve the dire situation of Lebanon, Hezbollah is taking advantage of it to further entrench itself, especially in Southern Lebanon and in the Lebanese government, in ways that further deteriorate the situation of the country,” he said.

The cross-border tunnels, exposed and destroyed by the IDF in 2018, were designed to allow the organization’s elite Radwan force to raid Israeli communities “and kill as many Israeli civilians. That is their sole goal. Luckily, with a lot of effort and hard work, we were able to expose these terror tunnels and foil them,” said the source.

“The delegation saw how much time and effort went into building them, how the know-how came from Iran, and that millions of dollars were put in the ground, as well as many years of work,” added the IDF official.

At Haifa Navy Base, the delegation was briefed by senior naval officials and visited a new Israel Navy Sa’ar 6-class vessel and submarines.

The delegation was shown the new Rafael-made C-Dome—the maritime version of the Iron Dome—designed to help shield Israel’s offshore oil rigs in its exclusive economic waters from Hezbollah and Hamas projectile attacks.

The group also toured Tel Nof Airbase south of Tel Aviv, where they saw F-15 squadrons training; and Palmachim Airbase, where they met with representatives of Israel’s Missile Defense Organization, a part of the Defense Ministry.

The official described the talks with the delegation as being part of a wider pattern of “very intimate and fruitful cooperation between the German military and the IDF.”

Shai Bazak, CEO of ELNET-Israel, said: “Hosting such an important delegation from Germany in Israel during these times of major geopolitical shifts in Europe in light of the war in Ukraine speaks volumes to the importance of the German-Israel relations. Now, more than ever, it is especially significant that the German Defense Committee Members gain an in-depth understanding and exposure to Israel’s security system, and exchange mutual knowledge for a more advanced and secure reality. I am confident that this visit will help us to further advance Germany and Israel’s mutual interests.”