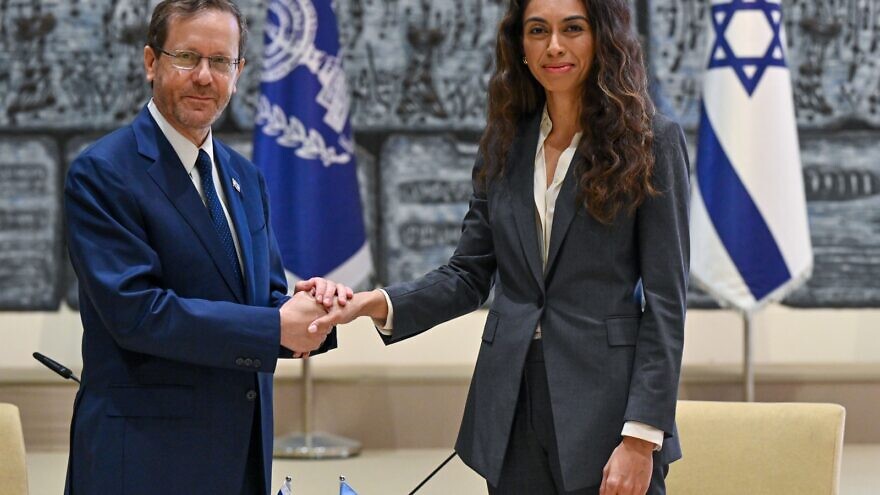 (October 31, 2022 / JNS) Israeli President Isaac Herzog received on Monday the credentials of the new ambassadors from Moldova, Ghana, Zimbabwe, New Zealand, Mongolia and, for the first time ever, Palau, in a series of ceremonies at his official residence in Jerusalem.

The incoming envoys were welcomed by the IDF Band playing their respective national anthems, after which they each presented their letters of credence to Herzog and held a meeting with him.

Moldovan Ambassador Alexandr Roitman, who previously served as the country’s chargé d’affaires in Israel, extended President Maia Sandu’s personal regards to Herzog and an invitation to visit Chișinău. Herzog noted that Israel and Moldova are marking 30 years of diplomatic relations.

Meanwhile, non-resident Zimbabwean Ambassador Shebba Shumbayawonda, who had been serving as his country’s top envoy to Cairo since 2019, expressed hopes for the expansion of bilateral relations in various fields.

Non-resident Ambassador of New Zealand Zoe Coulson-Sinclair, who is concurrently serving as Wellington’s ambassador to Turkey, Azerbaijan and Jordan, discussed Māori history and culture with Herzog, whose late father, former President Chaim Herzog, made the first official visit by an Israeli head of state to New Zealand.

Non-resident Mongolian Ambassador Munkhbayar Gombosuren, a former minister of construction and urban development, who is concurrently serving as ambassador to Turkey and Azerbaijan, raised with Herzog possibilities for cooperation on environmental issues, primarily forestation.

Finally, non-resident Ambassador of Palau Ilana Seid, the country’s permanent representative to the United Nations, became the island nation’s first-ever ambassador to Israel. Seid explained to Herzog her heritage as the granddaughter of a Jew from California who fought in the Royal Canadian Air Force during World War II. Herzog thanked Seid for Palau’s support in international forums and discussed ways for Jerusalem to help Ngerulmud advance in the fields of agriculture, technology and desalination.