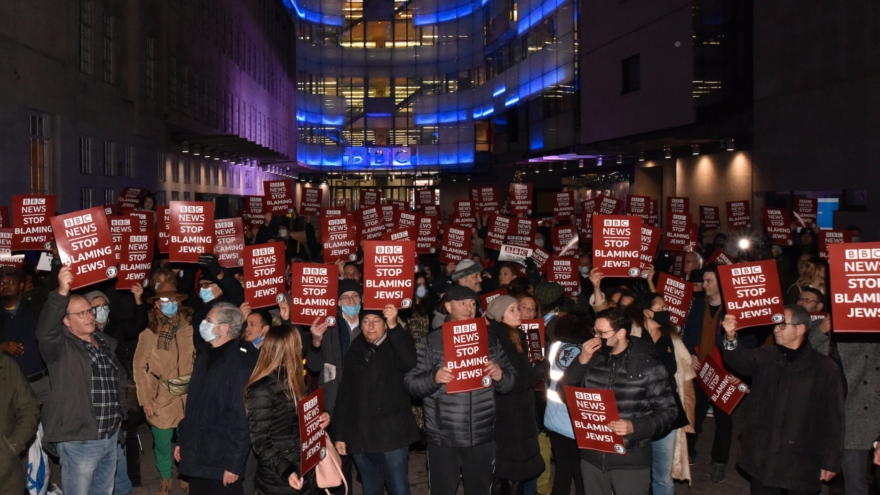 Demonstrators with the Campaign Against Antisemitism outside of BBC headquarters in London protesting a report made during Hanukkah, Dec. 13, 2021. Source: Twitter.
Spread the word.
Help JNS grow!
Share now:

(December 13, 2021 / JNS) As many as 250 Britons stood outside of the headquarters of the publicly funded British Broadcasting Corporation (BBC) in London on Monday night to demand that it take accountability for anti-Jewish coverage on the network.

There, they chanted “BBC, where the proof? BBC, tell the truth” in response to an on-air report during Hanukkah about an attack on a bus full of Jewish teens in Central London. In its coverage of the event, according to Campaign Against Antisemitism, the BCC reported that racial slurs against Muslims were made by young riders.

“This incident is one of many in which the BBC has victim-blamed Jewish people for anti-Semitism, downplayed racism towards Jews, platformed anti-Semites and fueled anti-Semitism in Britain,” the group said in announcing the event.

“We don’t want to be here, but we have to be here because we have to say: ‘BBC news, stop blaming Jews,’ ” said Gideon Falter, chief executive of the Campaign Against Antisemitism, during the rally.

He went on to note that “we see no evidence for the @BBC’s claim, which is a distraction from the real story, which is that Jewish teenagers were prevented by racist thugs from celebrating Hanukkah.”