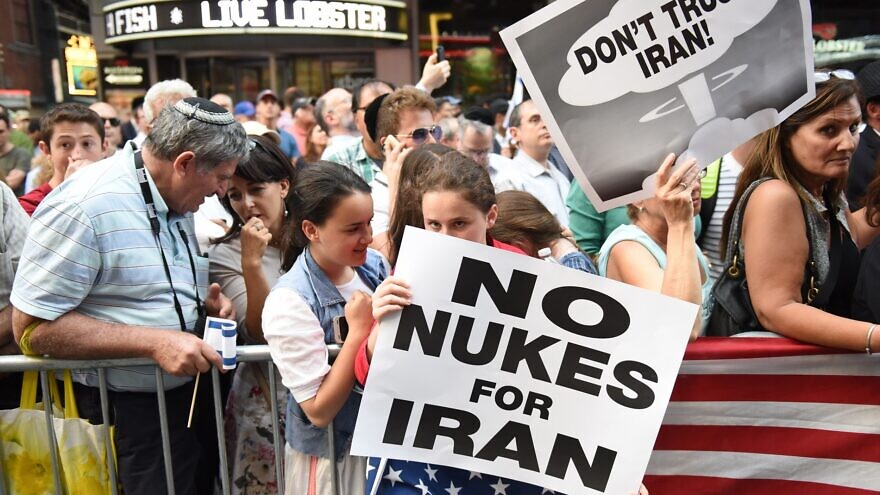 Thousands rally in New York City against appeasing Iran at the time of the first nuclear deal signed in 2015. Credit: A Katz/Shutterstock.
Spread the word.
Help JNS grow!
Share now:

(November 10, 2022 / JNS) Iranian officials offered no new information or concessions in their most recent meeting with representatives of the International Atomic Energy Agency, the U.N. organization’s chief, Rafael Grossi, told Reuters on Wednesday.

“So, they didn’t bring anything new. We are going to meet again at a technical level in Iran in a couple of weeks,” he said, adding: “It is no secret that we haven’t been able to register some tangible elements.”

There would be another opportunity to “re-engage” with Iran, he noted, but only after the release of the IAEA’s quarterly report on Iran next week.

Tehran is reportedly insisting that the U.N. nuclear watchdog close all investigations into its atomic activities as a precondition to reviving the 2015 nuclear deal with world powers.

Indirect talks between the Islamic Republic and the Biden administration remain stalled.

U.S. special envoy for Iran Robert Malley on Oct. 31 made “no apology” for pursuing a revised nuclear deal, even as he conceded that forging a new agreement was “really not our focus now.”

Malley said Washington currently was not “wasting time” on negotiations, citing the ongoing mass protests in the Islamic Republic and the ongoing Russian invasion of Ukraine.

“I think people have to understand that [we] were not tying our hands because of … this hope that someday maybe there’ll be a deal,” said Malley. “We are not going to focus on something that is inert when other things are happening,” he continued, referencing the demonstrations in Iran and Tehran’s decision “to get involved in a war in Europe” by transferring weapons to Russia.

U.S. Rep. Claudia Tenney (R-N.Y.) told JNS in September that Malley was consistently vague in his briefing that month to the House Foreign Affairs Committee, leaving the bipartisan group flustered.

“We didn’t really get strong answers on what’s going on with a [nuclear] deal. The whole premise is supposed to be that Iran is never going to have a nuclear weapon. But the premise I walked out of that meeting with was, well, we’re just going to eventually let them have one,” Tenney said.