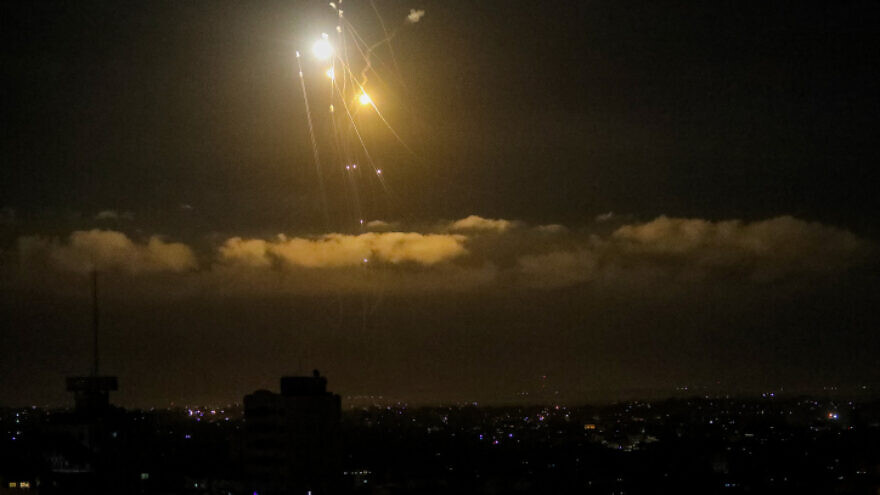 (May 19, 2022 / JNS) Israeli air defenses on Thursday shot down a drone flying in a suspicious manner over Gaza, according to the Israeli military.

In a statement, the Israel Defense Forces said that “a short while ago, a suspicious aircraft was identified over the Gaza Strip. The aircraft did not cross into Israeli territory and was monitored throughout the incident.”

Channel 13 said in a report that an Iron Dome air-defense battery fired an interceptor at the threat west of Rafah in southern Gaza. The channel’s website published video footage, apparently taken on a cell phone, of a plume of smoke in the sky over the area in the aftermath of the interception.

The report also cited the pro-Hezbollah Al-Mayadeen TV channel as quoting “sources” who said, “the resistance today sent a message to the Israeli enemy that it will not allow the flag march to pass through the route that it decided on.”

The flag march, planned for Jerusalem Day on May 28, will follow its traditional route through the Jewish and Muslim quarters of the Old City.

The march’s route was changed in 2021 to avoid the Muslim Quarter during last year’s security escalation with Hamas.

The IDF updated civilians minutes later that the incident was the result of a misidentification, and that “the Israeli home front is in full routine.”