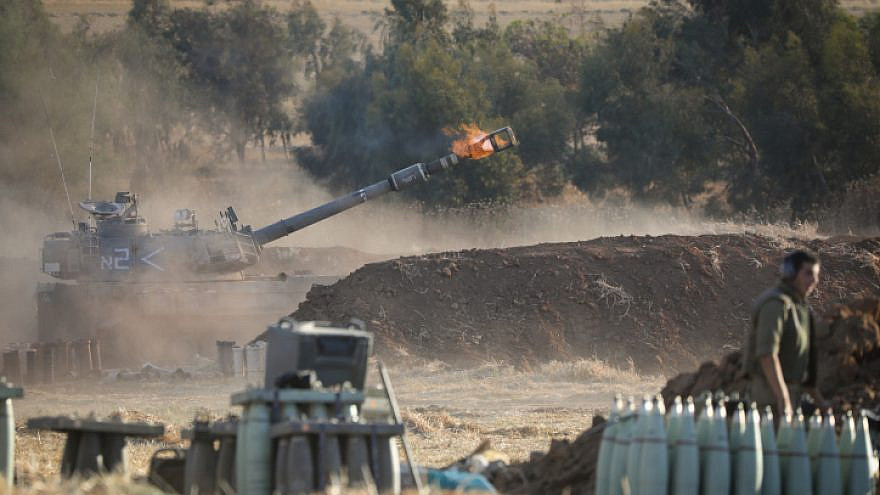 The IDF Artillery Corps fires into the Gaza Strip from the border on May 13, 2021. Photo by Noam Revkin Fenton/Flash90.
Spread the word.
Help JNS grow!
Share now:

“IDF air and ground troops are currently attacking,” the IDF wrote on Twitter, without providing more details on the scope of the operation.

It does not appear that the military has launched a full ground operation or yet entered Gaza, though earlier in the day, it called up thousands of reserve troops.

Anticipating a heavy response by Hamas, the IDF ordered all Israelis living within four kilometers of the Gaza border to remain in their bomb shelters until further notice.

Israeli Prime Minister Benjamin Netanyahu said Hamas will pay a heavy price. “I said that we would exact a very heavy price on Hamas, we are doing this and we will continue with great force. The final word has not been said, and this operation will continue for as long as needed,” declared the Israeli leader, according to the Prime Minister’s Office.

Earlier on Thursday, Defense Minister Benny Gantz approved the call-up of 9,000 reservists after the previous approval of 7,000 reservists.

The military personnel will enter combat units and support headquarters as part of “Operation Guardian of the Walls,” Gantz’s office said in a statement, adding that they will be stationed in the IDF’s Southern, Central and Northern Command in place of other units mobilized to other missions.