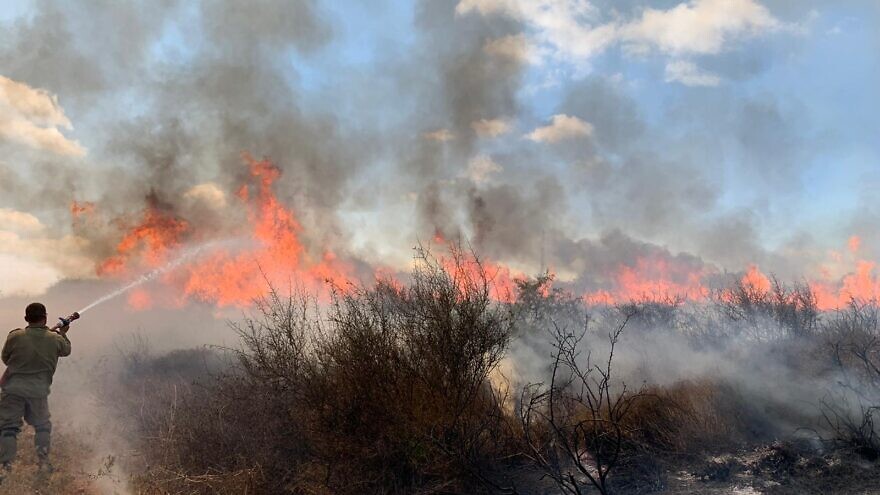 (September 2, 2020 / JNS) The Israel Defense Forces struck some 100 Hamas targets in August in response to a wave of terrorism from the Gaza Strip, the Israeli military said on Tuesday.

Following Monday’s announcement of a ceasefire agreement between Israel and Hamas—whereby the terrorist organization agreed to halt arson and rocket attacks, as well as border riots, in exchange for an easing of border and fishing-zone restrictions—the IDF released a list of the retaliatory actions it took over the past few weeks.

According to the IDF, 35 Hamas weapons manufacturing sites were hit, along with 30 underground sites, 20 observation posts and 10 sites linked to the terrorist group’s aerial capabilities, such as drones and anti-aircraft systems.

The military also released footage of some of the strikes, as well as a map of Gaza showing the approximate location of the targets.

“These strikes constitute a significant blow to Hamas’s infrastructure of terror,” said the IDF.

In the wake of the ceasefire agreement, the Israeli Coordinator of Government Activities in the Territories (COGAT) stated that if the terrorist violence ends, Israel will reopen the Kerem Shalom border crossing to Gaza and reopen the Gaza fishing zone.

COGAT warned, however, that “if Hamas, which bears responsibility for that which takes place in the Strip, does not abide by its pledges, Israel will act accordingly” and reimpose tough restrictions.

Despite the ceasefire understandings and COGAT’s warning, however, explosions caused by balloons were heard late on Monday night, according to Israeli public broadcaster Kan.

Meanwhile, Palestinian-affairs expert Khaled Abu Toameh reported that Hamas has been presenting the ceasefire deal—reached through the mediation of Qatari envoy Mohammed al-Emadi—as an achievement. According to Abu Toameh, shortly after the agreement was reached, Qatar said that it will distribute $17 million in aid to Gaza—$7 million to those affected by the coronavirus pandemic and $10 million for “needy families.”

Less than a week before the deal was reached, the Gaza Communications Ministry said that it had received $30 million from Doha on Aug. 21, to be distributed to needy families. AFP reported that hundreds of Palestinians lined up at post offices the following morning to receive the $100 allocated per family.

In March, Qatar announced $150 million in aid to the Gaza Strip, to be distributed in monthly payments of $25 million, to support United Nations humanitarian programs there and bolster efforts to contain the coronavirus outbreak. The last of these payments were due last month.

Hamas denied Hebrew media reports attributing the recent upsurge in attacks against Israel to an attempt by the terrorist organization to pressure Qatar into continuing these payments.