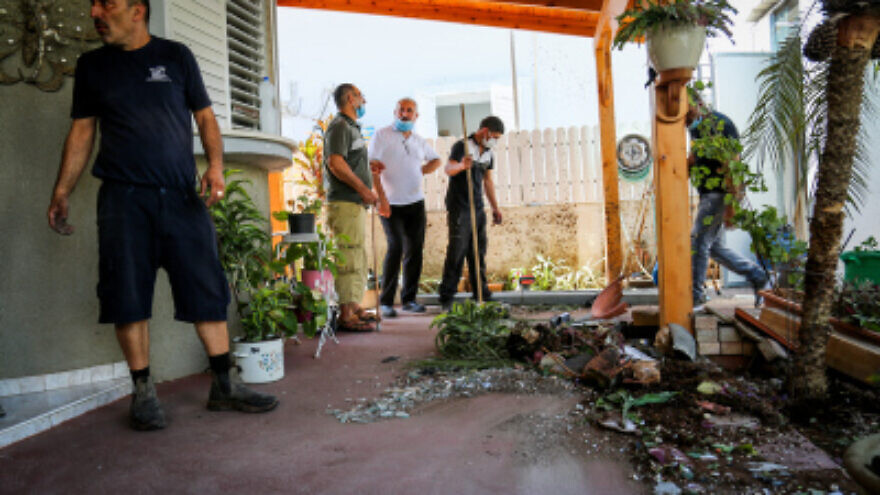 View of damage to a house caused from a rocket fired by Hamas from the Gaza Strip, in the southern Israeli city of Sderot, Aug. 16, 2020. Photo by Flash90.
Spread the word.
Help JNS grow!
Share now:

(August 16, 2020 / JNS) Israeli Defense Minister Benny Gantz on Sunday ordered the Gaza fishing zone closed following an upsurge in Hamas attacks and Israeli retaliatory strikes. Israel “will respond forcefully to any violation of sovereignty until complete quiet is restored in the south,” said Gantz. “If Sderot isn’t quiet, Gaza won’t be either.”

The Israel Defense Forces struck several Hamas targets in Gaza early Sunday morning after shrapnel from the downing of a rocket fired from Gaza hit a house in the southern Israeli city of Sderot, according to the military. A 58-year-old Israeli man was lightly wounded in the incident, according to first responders.

“Earlier tonight, rockets were fired from Gaza into Israel. In response, our Air Force just struck Hamas terror targets in Gaza, including a military compound used to store rocket ammunition. We will continue to operate against any attempts to harm Israeli civilians,” the IDF said in a statement.

According to the military, two rockets were fired into Israel, setting off air-raid sirens. Both of the rockets were intercepted by Israel’s Iron Dome air defense system, the IDF said.

While according to initial police reports it was one of the rockets that struck Sderot, the military later said that it appeared to be debris from an interception.

“Further to the report of a rocket strike tonight near a house in Sderot: According to an IDF investigation, it would appear that [the incident involved] fragments of an interception of a rocket fired from the Gaza Strip into Israel,” said the IDF.

Sunday’s rocket attack following another wave of Israeli airstrikes on Hamas targets in Gaza, which according to the IDF were in response to violent riots at the Gaza border and ongoing incendiary balloon attacks from the Hamas-ruled enclave.

“Palestinian rioters in Gaza hurled explosives and attempted to approach the security fence into Israel tonight. This is after explosive balloons were launched from Gaza in Israel today,” the IDF said on Twitter on Saturday. “We hold Hamas accountable.”

Sunday marked the sixth consecutive day Israel has launched retaliatory strikes in Gaza in response to a barrage of incendiary and explosive devices being launched into Israel from Gaza. These attacks have caused dozens of fires in southern Israel in recent weeks.

On Aug. 10, Israel closed the Kerem Shalom border crossing into the Gaza Strip in response to the ongoing cross-border attacks, though Defense Minister Gantz’s office stressed that the flow of humanitarian aid and fuel through the crossing would remain unchanged.