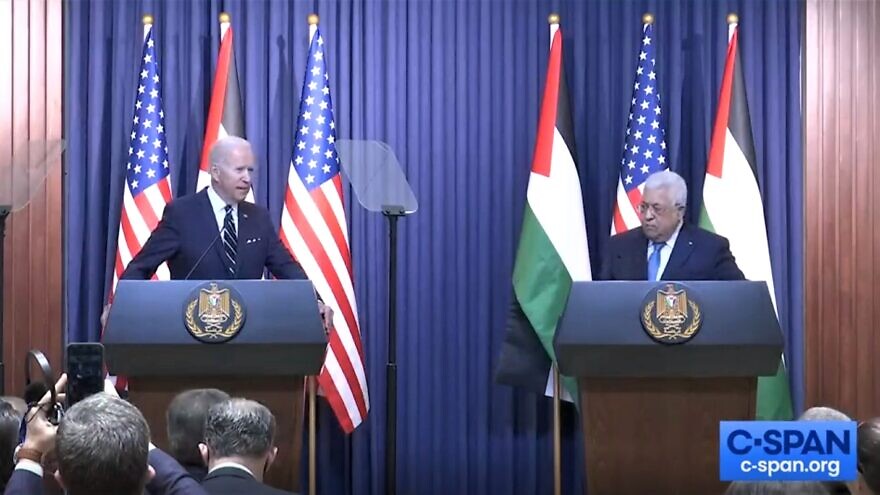 During the last of his nearly three-day trip to Israel before flying to Saudi Arabia, U.S. President Joe Biden met with leaders from the Palestinian Authority on Friday to reaffirm America’s commitment to a two-state solution and the well-being of the Palestinians.

In Bethlehem, Biden met with Palestinian Authority leader Mahmoud Abbas, where the president “underscored his commitment to a two-state solution on the 1967 lines with land swaps mutually agreed by the Israelis and Palestinians.”

During the meeting, Biden expressed that the U.S. position was that Jerusalem is the capital of Israel, but specific boundaries must be resolved by final-status negotiations between the Palestinians and Israelis through dialogue.

Biden also called on the status quo to be maintained at the holy sites in Jerusalem, including keeping in place Jordan’s role as custodian of the Al-Aqsa mosque. To create conditions for negotiations to move forward, he urged both Palestinians and Israelis to avoid unilateral measures to inflame tensions.

He said that direct negotiations are needed to achieve an “independent, sovereign, viable and contiguous Palestinian state alongside the State of Israel, both enjoying secure and recognized borders, allowing the two peoples to live side-by-side in peace and security.”

“Palestinian people deserve to live lives of dignity and opportunity; to move and travel freely; to feel secure in their communities; and to give hope to their children that they will one day enjoy the same freedom and self-determination of their neighbors,” he stated.

The president also discussed initiatives being undertaken by America to support the Palestinian people, and encouraged regional governments and the international community to assist them.