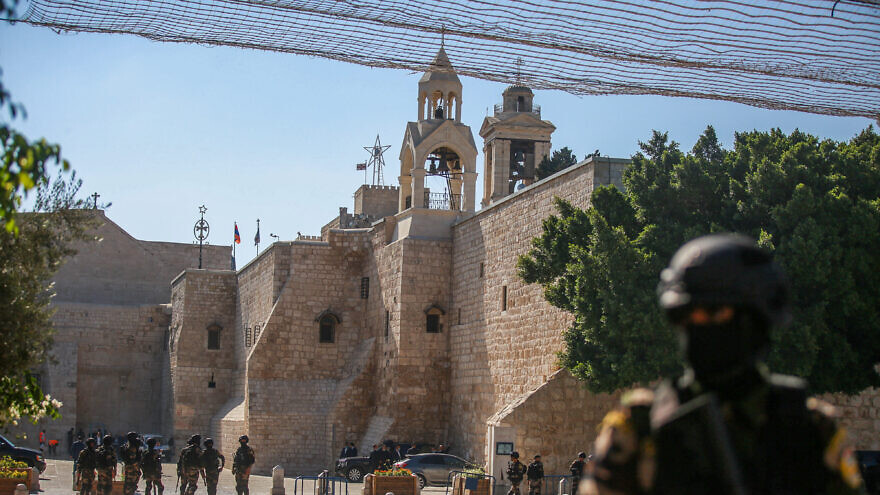 Palestinian Authority security forces guard outside the Church of Nativity in Bethlehem on July 14, 2022, before the visit of U.S. President Joe Biden on July 15, 2022. Photo by Flash90.
Spread the word.
Help JNS grow!
Share now:

It followed Biden’s visit earlier in the day to the Augusta Victoria Hospital on the Mount of Olives in eastern Jerusalem, where he announced $100 million in aid for Palestinian health-care projects based in Israel’s capital city.

Following the meeting with Abbas, Biden toured the Church of the Nativity in Bethlehem. Afterwards, he was greeted by Israeli Prime Minister Yair Lapid, Israel’s President Isaac Herzog and other officials at Ben-Gurion International Airport for a small farewell ceremony ahead of his departure to Saudi Arabia.

Biden’s direct flight to Jeddah follows Riyadh’s announcement on Friday that the kingdom is opening its airspace to “all carriers,” paving the way for Israeli commercial liners to overfly the kingdom and drastically reducing flight times from the Jewish state to destinations in East and Southeast Asia.

On Thursday, Biden and Lapid signed an agreement pledging to prevent Iran from developing a nuclear weapon and reaffirming a U.S. commitment to expanding and supporting peace among Israel and its moderate Arab neighbors.

The “U.S.-Israel Strategic Partnership Joint Declaration” states that America pledges to “never to allow Iran to acquire a nuclear weapon and that it is prepared to use all elements of its national power to ensure that outcome.”

Washington is similarly “committed to continue playing an active role” in the Abraham Accords and ensuring regional security, “including in the context of President Biden’s upcoming visit to Saudi Arabia,” with the aim of expanding the “circle of peace” to include more Arab and Muslim states, states the declaration.