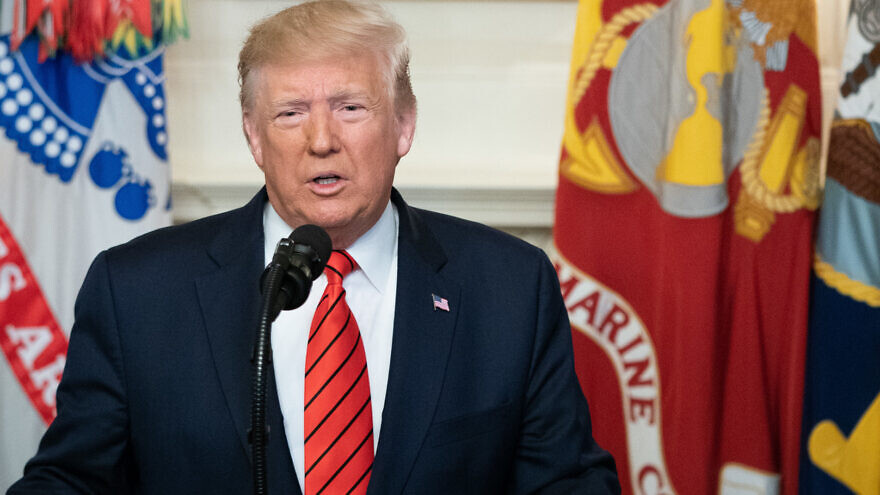 (September 22, 2020 / JNS) In his speech to the United Nations on Tuesday, U.S. President Donald Trump touted his accomplishments on Iran and Mideast normalization deals with Israel.

In a pre-recorded address from the White House’s Diplomatic Reception Room to the 75th U.N. General Assembly, which is mostly virtual due to the coronavirus pandemic, Trump mentioned withdrawing the United States from the “terrible” 2015 Iran nuclear deal and imposing “crippling sanctions on the world’s leading state sponsor of terror.”

Al-Baghdadi killed himself and two children by detonating a suicide vest during a raid of his compound by U.S. forces in northwest Syria in October 2019, while Soleimani, general of the Quds Force of Iran’s Islamic Revolutionary Guard Corps, was targeted in a U.S. airstrike on Jan. 3 at Baghdad International Airport.

Trump also mentioned the Sept. 4 economic deal between Serbia and Kosovo in which the latter has agreed to formally recognize the State of Israel and open an embassy in Jerusalem. Serbia has also agreed to move its embassy from Tel Aviv to Jerusalem.

The president hailed what he called “a landmark breakthrough” with the United Arab Emirates and Bahrain, which signed agreements last week to normalize relations with Israel. He reiterated that there are more Mideast countries that will follow their lead.

The president also reiterated that the deals represent “the dawn of the new Middle East.”

“By taking a different approach, we have achieved different outcomes—far superior outcomes. We took an approach, and the approach worked,” continued Trump. “We intend to deliver more peace agreements shortly, and I have never been more optimistic for the future of the region. There is no blood in the sand. Those days are, hopefully, over.”