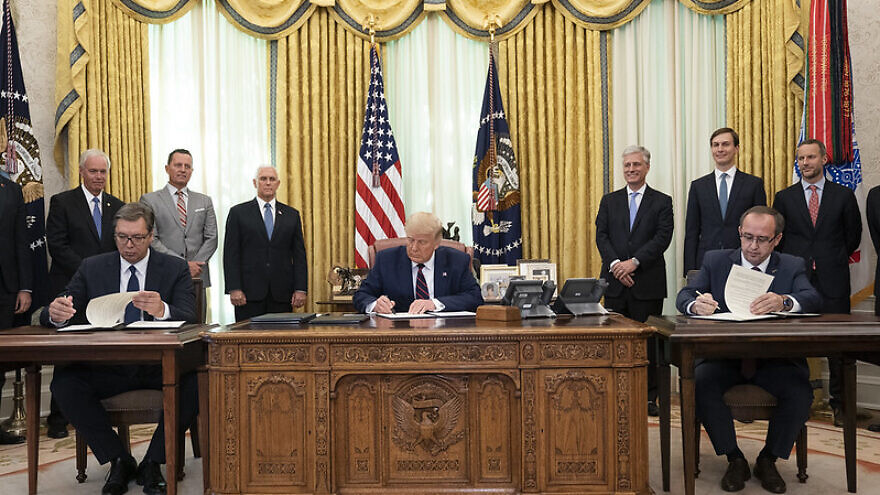 (September 6, 2020 / JNS) As part of a historic U.S.-brokered agreement to normalize economic relations between Kosovo and Serbia, Kosovo has agreed to formally recognize the State of Israel and open an embassy in Jerusalem, and Serbia has agreed to move its embassy from Tel Aviv to Jerusalem.

“Kosovo will be the first Muslim majority country to open an embassy in Jerusalem,” said Netanyahu, according to a statement.

“As I have been saying in recent days, the circle of peace and recognition of Israel is expanding and additional countries are expected to join it,” he added.

Vučić also announced on Friday that his country would also transfer its embassy to Jerusalem, and that in the meantime, it would open representation there.

Netanyahu extended his thanks to Vučić and Trump regarding the move.

“I thank my friend, Serbian President Vučić, for the decision to recognize Jerusalem as the capital of Israel and to transfer to it his country’s embassy. I would like to thank my friend, President Trump, for his contribution to this achievement. We will continue efforts so that additional European countries will transfer their embassies to Jerusalem,” he said.

Israel’s ambassador to the United Nations, Gilad Erdan, welcomed the diplomatic achievement on Twitter, saying it would “soon lead to more Muslim countries choosing peace with Israel and leaving the rejectionist Palestinians isolated.”