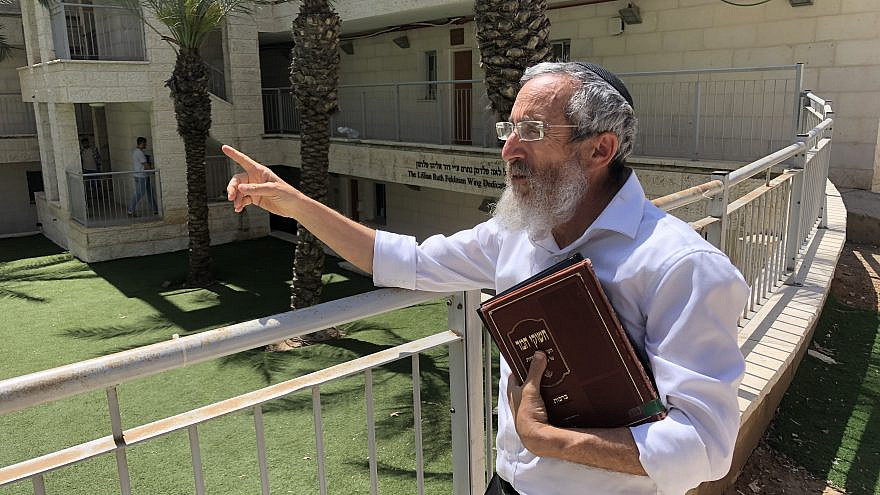 (May 12, 2021 / JNS) At 9 a.m. on Wednesday morning, I got into my car in Gush Etzion, near Jerusalem to head down to communities along the Gaza envelope in order to learn firsthand from residents what they were going through in this latest round of rocket barrages being carried out by various terror organizations in Gaza, including Hamas and Palestinian Islamic Jihad.

According to the Israel Defense Forces, more than 1,300 rockets had been fired at Israeli communities as far north as Tel Aviv and its suburbs as of late Wednesday.

The first thing I noticed driving south was the lack of cars on the road. It almost felt as if Israel were still in the midst of one of its coronavirus pandemic lockdowns. A reporter on Army Radio noted that for the first time since the pandemic, he had no reports of traffic jams anywhere in Israel, which is unheard of on regular weekday morning.

At 10 a.m., I reached a kibbutz less than a kilometer from the northern end of the Gaza border that is serving as a staging area for soldiers guarding communities in the vicinity. As I arrived, the soldiers were gearing up and preparing to move out as an intelligence warning indicated a terrorist or group of terrorists from Gaza might have infiltrated into Israel in an attempt to launch an attack on an area community. At the same time, all civilian residents within four kilometers of the border were ordered indoors.

Twenty minutes later, my phone was sending alert after alert about incoming rockets towards surrounding communities.

“The same thing has been going on for the past 20 years.”

From the kibbutz, I headed to the town of Sderot, which has been one of the most (if not the most) targeted cities in Israel since the launching of the rockets began 20 years ago, in 2001. A town that had made a major economic recovery over the past several years, since Israel’s “Operation Protective Edge” in the summer of 2014, once again looked like a ghost town, with residents hunkering down indoors. 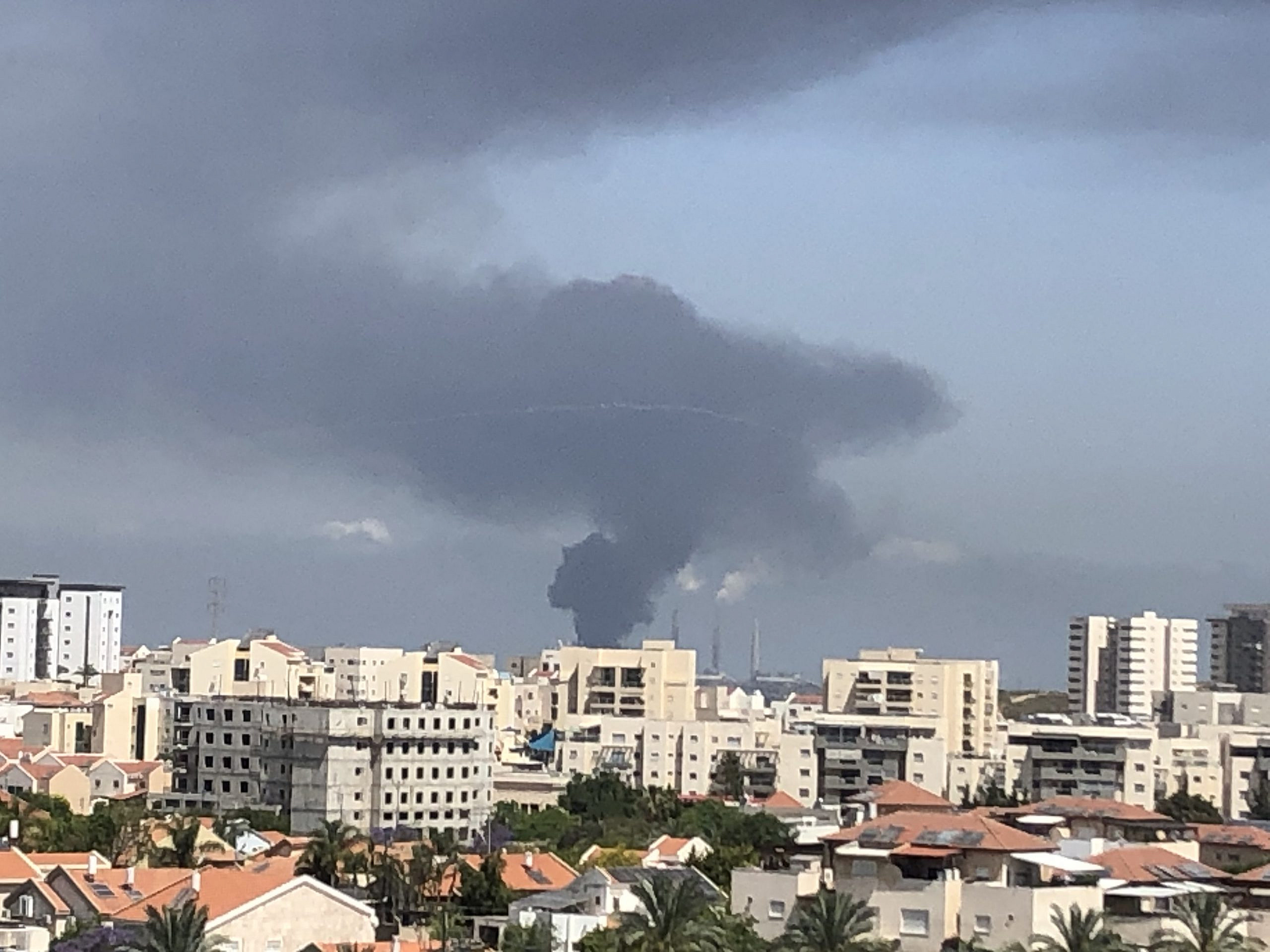 Image of smoke billowing from the large tank belonging to the Eilat-Ashkelon pipeline hit by a rocket on May 11, 2021. Photo by Josh Hasten.

There were a limited number of shoppers at the “Super Dahan” grocery store in the center of town, on what is normally a very busy shopping day for Israelis, who like to get a head start on Shabbat—and this week, Shavuot—preparations.

Asher Ohayon, who has worked at the supermarket for seven years and has lived in Sderot for the past 50, said that “the same thing has been going on for the past 20 years. There is a round of violence, and then we cease, and they [the terrorists] fire.”

He added that he doesn’t have any answers on how to prevent the Gazan violence from flaring up again and again. “There isn’t a real solution. Only God can help us,” he said. “I am hoping for peace, but the children of Esav [Esau] and Jacob have never gotten along,” he added, referencing the biblical sibling rivalry.

While Ohayon mentioned that Israel “might have to destroy Gaza,” he doesn’t see that as a realistic possibility. 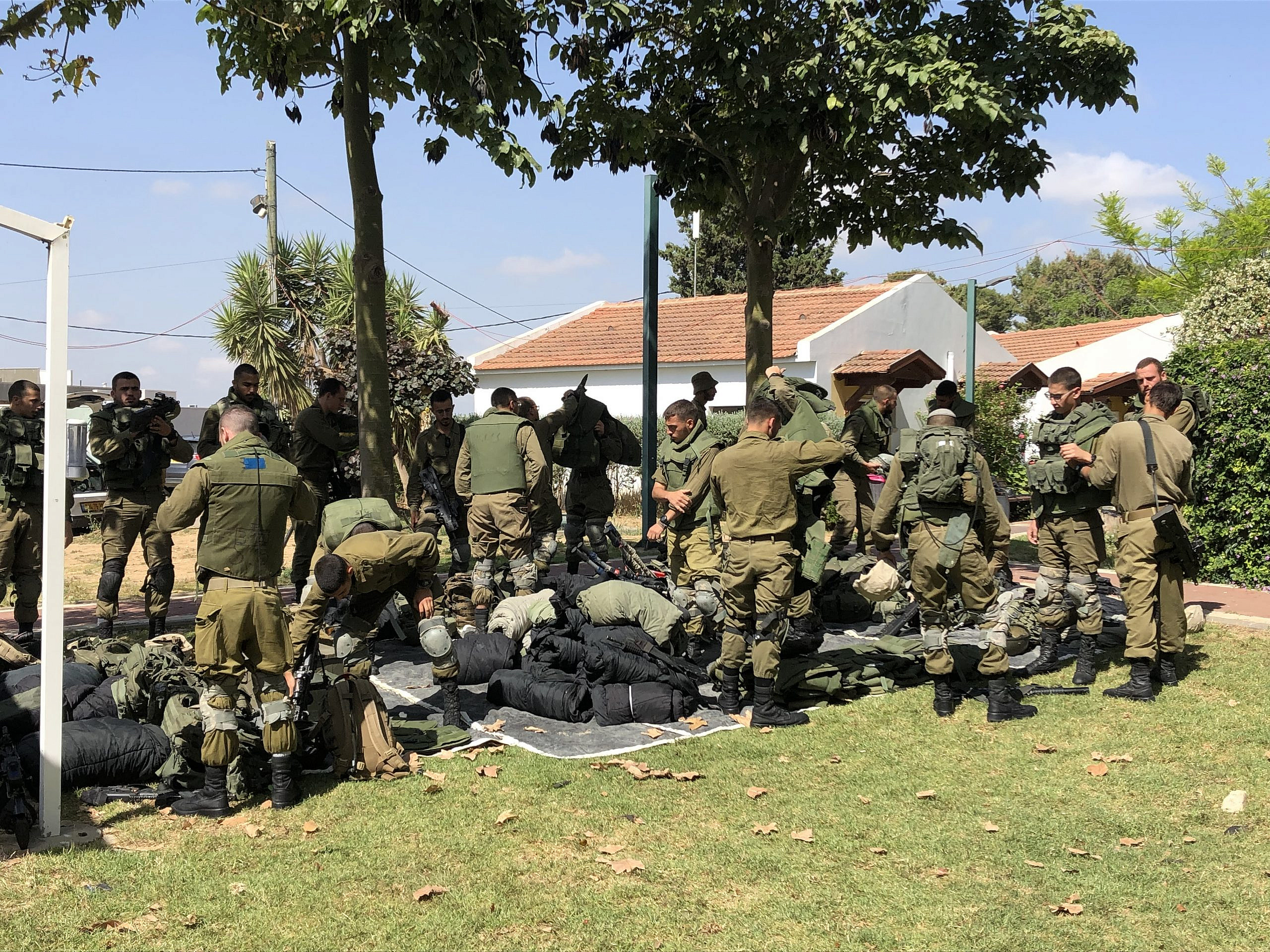 Givati Brigade soldiers preparing to scan the border for intelligence warnings of possible terror infiltrations, May 12, 2021. Photo by Josh Hasten.

Mazal Buchbut, 70, who has lived in Sderot since the age of 3, arrived at the supermarket, saying “I came to quickly do my shopping and go back home.” Motioning to the street, she said, “Look around, this is a terrible situation, everything is closed, and people are afraid to go outside. It is absurd that we have to be afraid in our own country. Where is our government? Where is the prime minister? We could finish Hamas in one or two days if we wanted to!”

Buchbut quickly parted ways so that she could get her items and go back to a more secure area.

Across the street from the supermarket, the Sderot Hesder Yeshiva provides Israeli soldiers with the opportunity to combine their military service with Torah learning. Most of the buildings, including the main beit midrash (Torah learning hall) and dormitories, were built with reinforced concrete to withstand the impact of a rocket.

So it came as no surprise that it was packed with students immersed in the pages of the Talmud, paying little attention to the bursts of noise outside, which at this point included the booms from the IDF attacking enemy positions in Gaza and the Iron Dome air-defense batteries intercepting rockets. 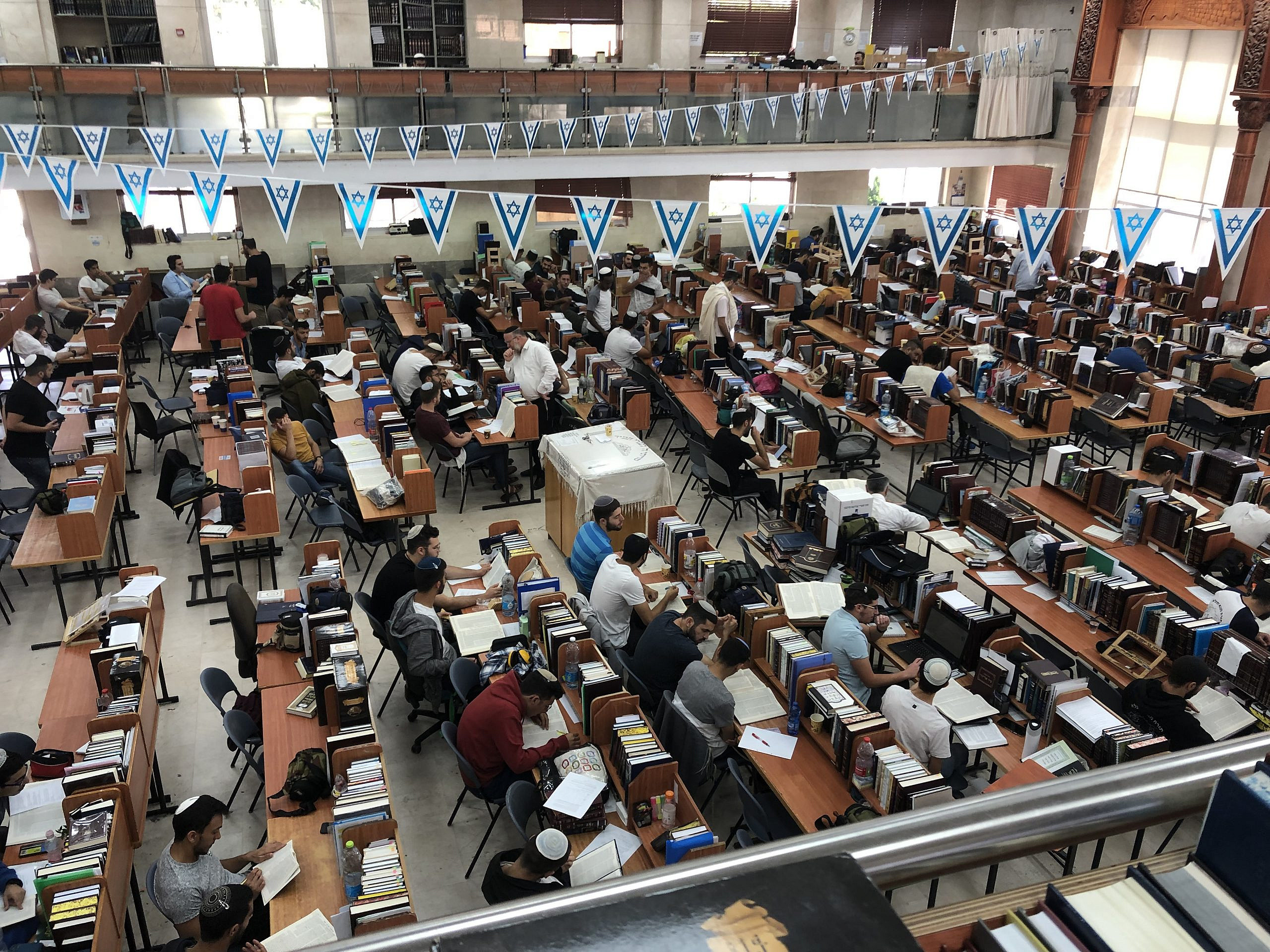 The packed beit midrash of the Sderot Hesder Yeshiva, May 12, 2021. Photo by Josh Hasten.

Rabbi David Fendel, the longtime rosh yeshivah who resides in Sderot, knows the suffering of his neighbors. “There are so many families affected, we don’t even know the scope,” he said. “I know of a third-grader who as a result of the trauma now wears diapers.”

He believes his institution is an answer to the terrorists. “The Palestinians are terrorizing, and the panic is the real danger. Their goal is to try to knock us down by instilling fear. But in our yeshivah, the sounds of Torah ring out as usual, and those sounds override the sounds of the booms that are so close.”

He added, “As young soldiers, our students see their job as bringing strength and resilience to the whole city. The fact that our study hall is packed is a demonstration of that resilience and courage.”

After departing Sderot, I headed 20 minutes northwest to the coastal town of Ashkelon, which has seen hundreds of rockets fired at its residents in the past 48 hours. The Israel Government Press Office had organized a visit to the beleaguered town for foreign press to help give them an accurate understanding of the realities of the situation.

Standing outside an almost completely destroyed home in the middle of the city, which less than 24 hours earlier suffered a direct rocket hit—killing 32-year-old Soumya Santosh, a foreign caregiver from India, and seriously injuring the 82-year-old woman she was looking after.

Israel Police Foreign Media spokesman Micky Rosenfeld said “my message to Israelis is to stay close to the safety zones. You have 30 seconds or 45 seconds until those rockets land, so make sure you are responsible, and you understand the dangers of the threat of Hamas. There are more than 1 million Israelis under the threat of Hamas at the moment. 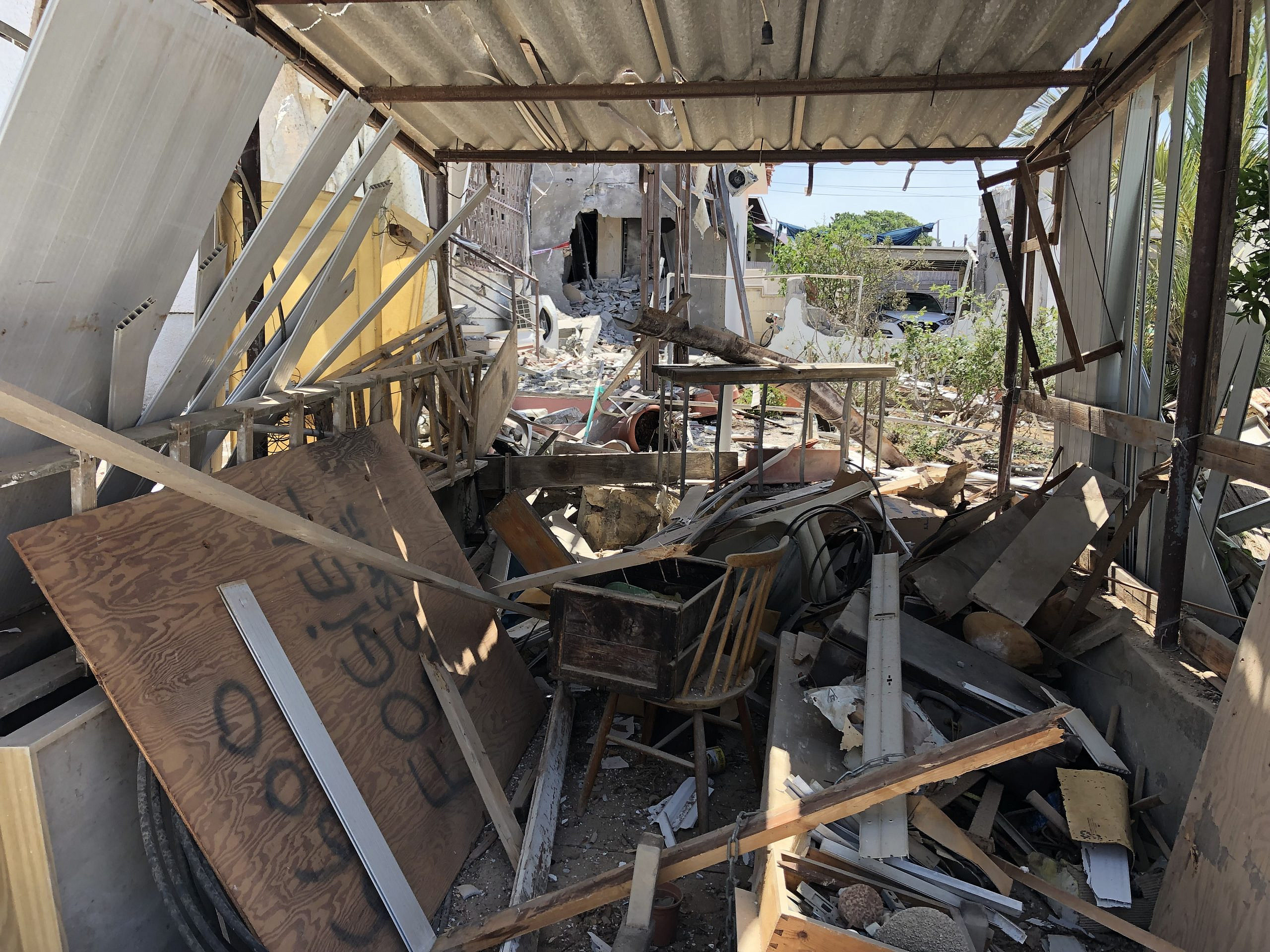 A house in Ashkelon suffered a direct hit that killed an Indian caregiver on May 11, 2021. Photo by Josh Hasten.

The riots Rosenfeld referenced include many in mixed Jewish-Arab communities such as Lod, Akko, Haifa, Jaffa and Tiberias, where nightly violent riots and demonstrations have been taking place by Arabs in solidarity with those in Gaza and Jerusalem.

Israeli Prime Minister Netanyahu declared a state of emergency in Lod on Tuesday, bringing in border police units to serve as reinforcements. Today, the Deputy Mayor of Lod, upon witnessing the destruction of a school and Torah center in that community at the hands of an Arab mob, broke down crying on Israel’s Kan news and referred to that incident as a “pogrom” against the Jews of the city. 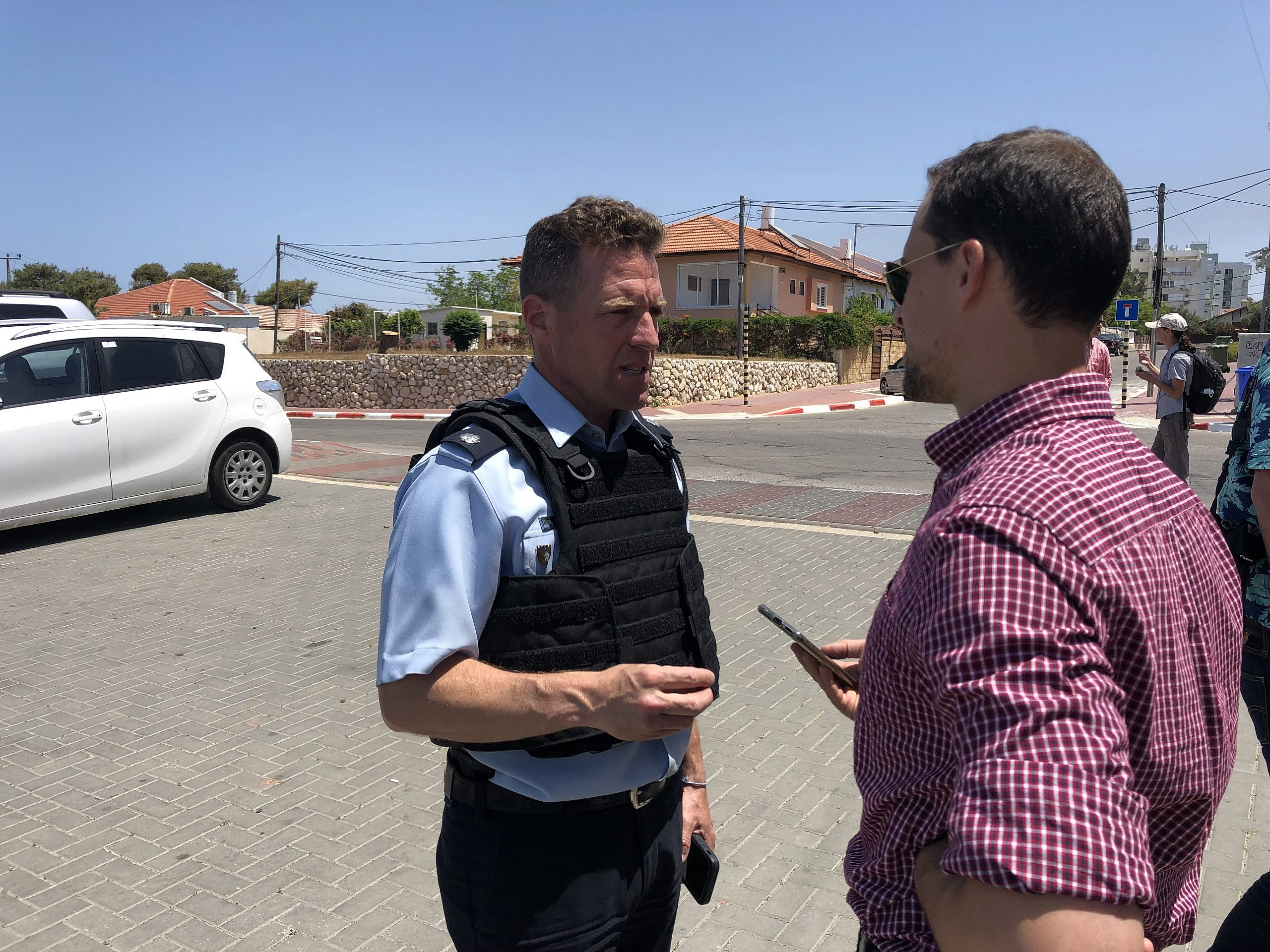 Following the GPO event, it was back to my office in Jerusalem, hoping that I would not have to pull over for sirens along the way.

From Jerusalem, I managed to reach Kibbutz Nirim resident Adele Raemer by telephone. Her community is less than two kilometers from the Gaza border, and has had its fair share of rocket sirens and landings over the years, to put it mildly. Raemer, who is a school teacher, as well as a teacher trainer for English and digital pedagogy, and has lived in Nirim since 1975, said that every round of rocket attacks is different “because you are never really 100 percent prepared for what is going to happen.”

She often shares the realities of the situation on the Gaza border through a Facebook group she administers called: “Life on the border with Gaza—things people may not know (but should).”

Raemer said that so far, Nirim has had fewer Red Alerts this time around since rockets have been fired further away, though “you still have to be ready. My safe room is open and ready to be inhabited.”

One of the issues she can’t understand is “how so many powerful rockets are being fired from there—a place that has supposedly been closed off for so long from all around [Egypt and Israel]. Where is our intelligence? Where are they getting the materials for these long-range rockets? People there don’t have food or building materials, so how is this stuff getting in?”

She expressed extreme frustration at yet another round of violence. “Where is my country’s strategy? We are so smart,” she said, referring to Israel as the “Startup Nation” and the first country that is almost fully vaccinated from the coronavirus. “When are we finally going to recognize that while Hamas is not officially a government, they are the government there, so let’s get to the table and talk to them.”

“In my mind,” said Raemer, “there is a range of options to solve this problem—from turning Gaza into a parking lot or sitting down to talk to them, and everything in between—but my government is doing nothing to stop it. And only when they [the terrorists] fire at Jerusalem or Tel Aviv do they do something serious. Why?”

Raemer added, “We’ve had three wars and so many escalations using weapons and bombs, and we aren’t in any place different than we were in 2008. Has anything changed? Maybe it’s time to do something different.”

She said that “it takes brave people, and with politics, it could cost them their seats, but for the good of the country you have to take courageous steps.”