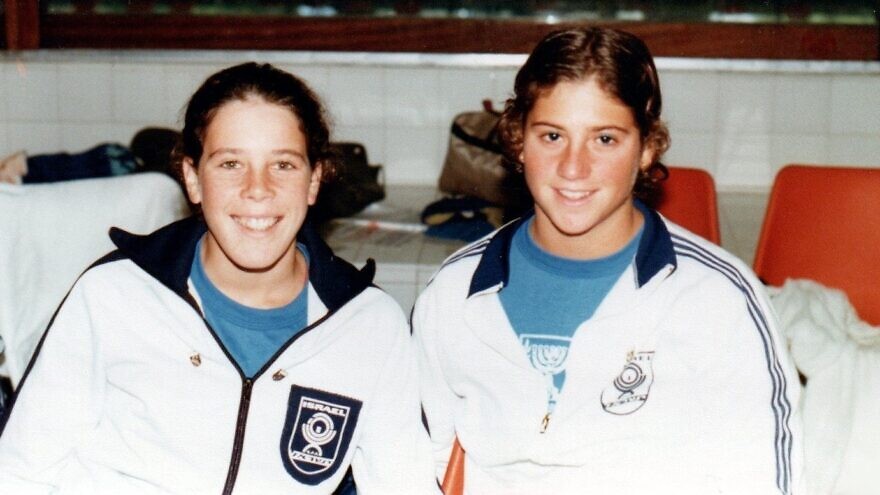 (July 7, 2022 / JNS) Swimming has always been at the center of Michele Kupfer’s life. She swam as a child growing up in Florida, she swam during her childhood summers in Israel, and she had the amazing fortune to swim for the Israeli National Swim Team from 1977 to 1982.

Kupfer was also a member of the 1980 Israeli Olympic team, though sadly did not compete in Moscow because of the U.S. boycott of Russia. Fortunately, one year later, she had the opportunity to experience what she describes as her “personal and athletic coming of age.” She and her teammates took the gold at the 1981 Maccabiah Games in Israel.

Kupfer’s Maccabiah experience was so personally inspiring and life-changing that she has found innovative ways to share the games with the rest of the world.

In fact, she is reuniting her championship swim—40 years later—to complete in the 21st Maccabiah Games in Israel this month from July 12 to July 26 (the opening ceremony takes place on July 14).

More than that, she is producing a movie, “Parting the Waters: The Story of The Maccabiah Games,” to tell the dramatic, inspiring and often not well-known stories of the Maccabiah, first held in 1932, years before the establishment of modern-day Israel in 1948.

In the process, she has been capturing meaningful stories of the game’s participants, as well as revisiting such inspiring and chilling chapters in Jewish sports history—namely, the 1936 Berlin Olympics and the massacre of 11 Israeli athletes and coaches at the 1972 games in Munich. 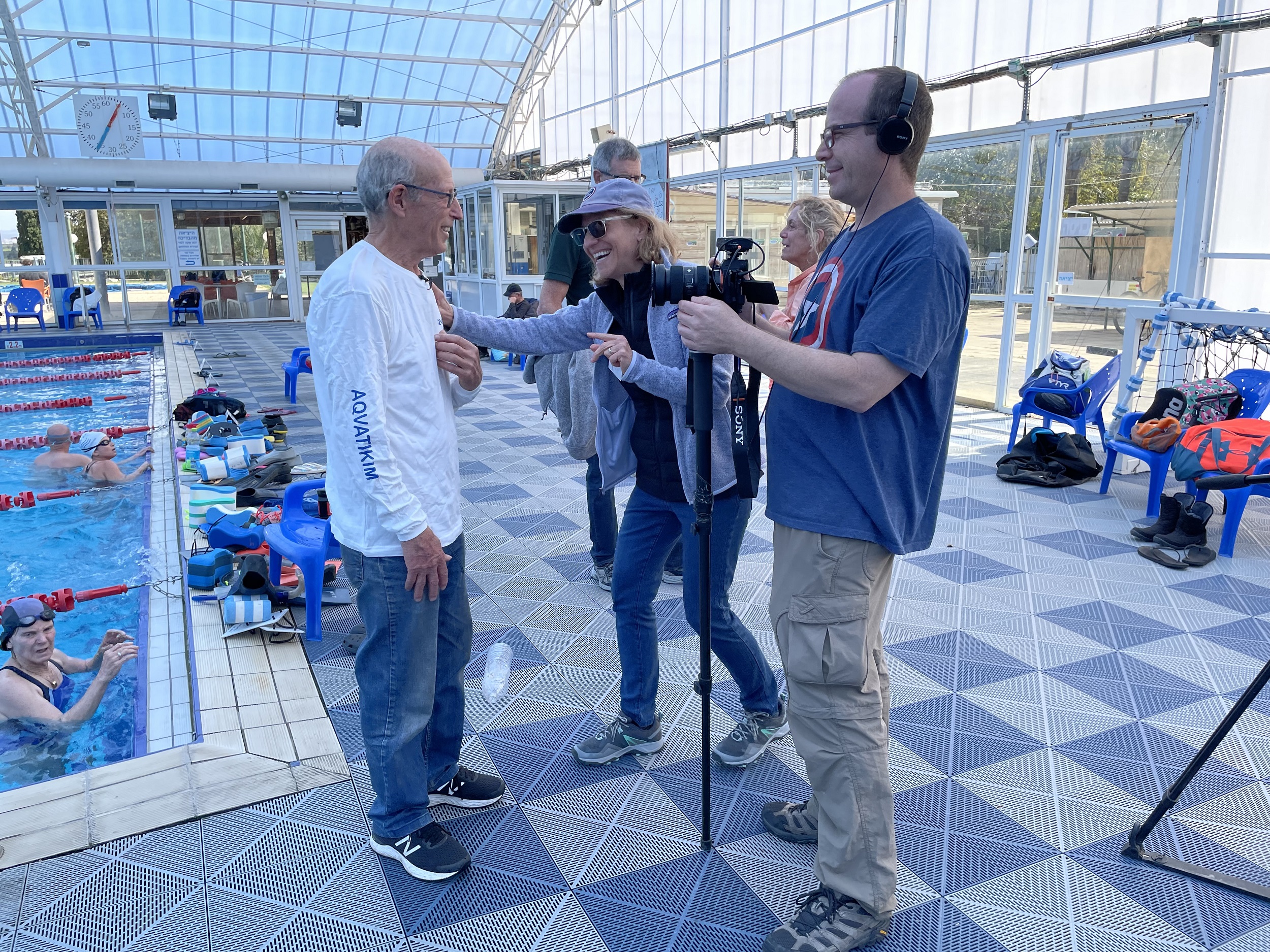 Michele Kupfer films Israeli Gershon Shefa, one of her coaches, who competed in the 1960, 1964 and 1968 Summer Olympics. Credit: Courtesy.

‘The perfect opportunity to tell this story’

The first Maccabiah Games were held in Tel Aviv just before Hitler’s rise to power in 1933 and 16 years before the founding of the modern State of Israel. That year, the Maccabiah brought together more than 400 Jewish athletes from Europe, North America and the Middle East. The games quickly grew in importance and showcased the talents of such future Olympians as American backstroker Lenny Krayzelburg and nine-time champion Mark Spitz.

Kupfer has stayed connected to many swimmers and coaches in the Maccabiah swimming world, including Krayzelburg (four Olympic gold medals and a former world record-holder), Nir Shamir (a team member from both the Olympic and Maccabiah team) and Dr. Naama Constantini, one of her first coaches, and now professor of sports medicine and director of the Heidi Rothberg Sports Medicine Center at Shaare Zedek Medical Center in Jerusalem. 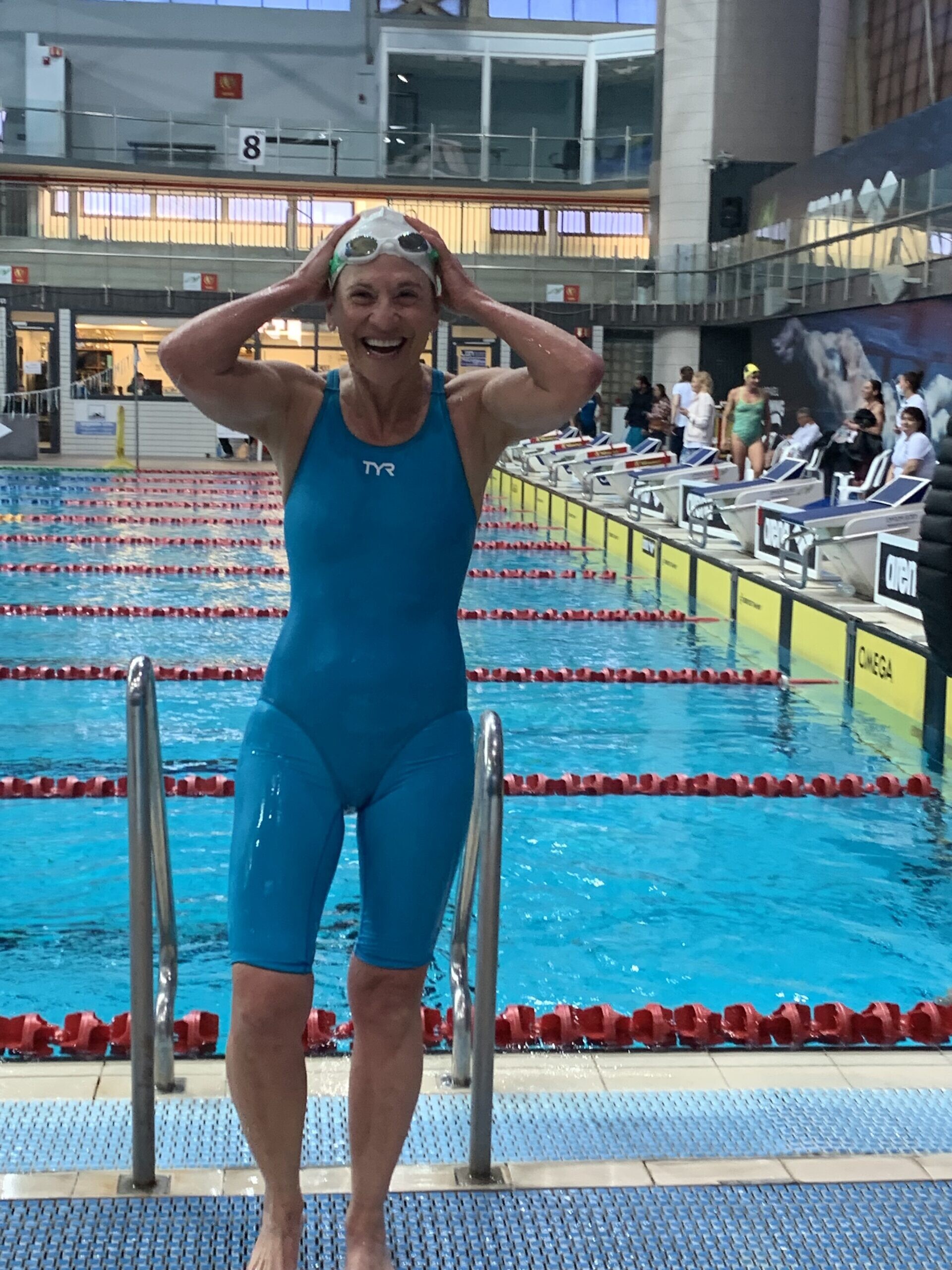 Michele Kupfer at the Israeli trials for the Masters Maccabiah 2022, in which she broke a record for her age group. Credit: Courtesy.

During the COVID-19 pandemic, several events and insights got Kupfer thinking about making the film.

First, noted being touched when she saw her former teammates rallying around a team member who was dying of cancer. “It got me thinking: What is the story here?” Kupfer did some research and discovered that there was no in-depth movie about Maccabiah, despite it being the third-largest athletic competition in the world behind the Olympics and the FISU World University Games.

Kupfer said she began to observe the rise of anti-Semitism in the world, as well as what she describes as “Israel’s big PR problem with our youth.” She notes what others have said, that young Jews often feel disconnected and even apathetic. She thought that this was “the perfect opportunity to tell this story, a human-interest story. And it is not political!”

And so, she started a 501(c)(3) charitable organization that is currently raising money to cover the costs of filming. She has already acquired Maccabiah footage going back to 1932 and will be filming this month at the Maccabiah Games. She is also aware that the clock is ticking on interviewing some older Maccabiah athletes, noting that “we are at a pivotal point—some won’t be alive much longer.”

Kupfer hopes the film will be completed sometime in 2023. 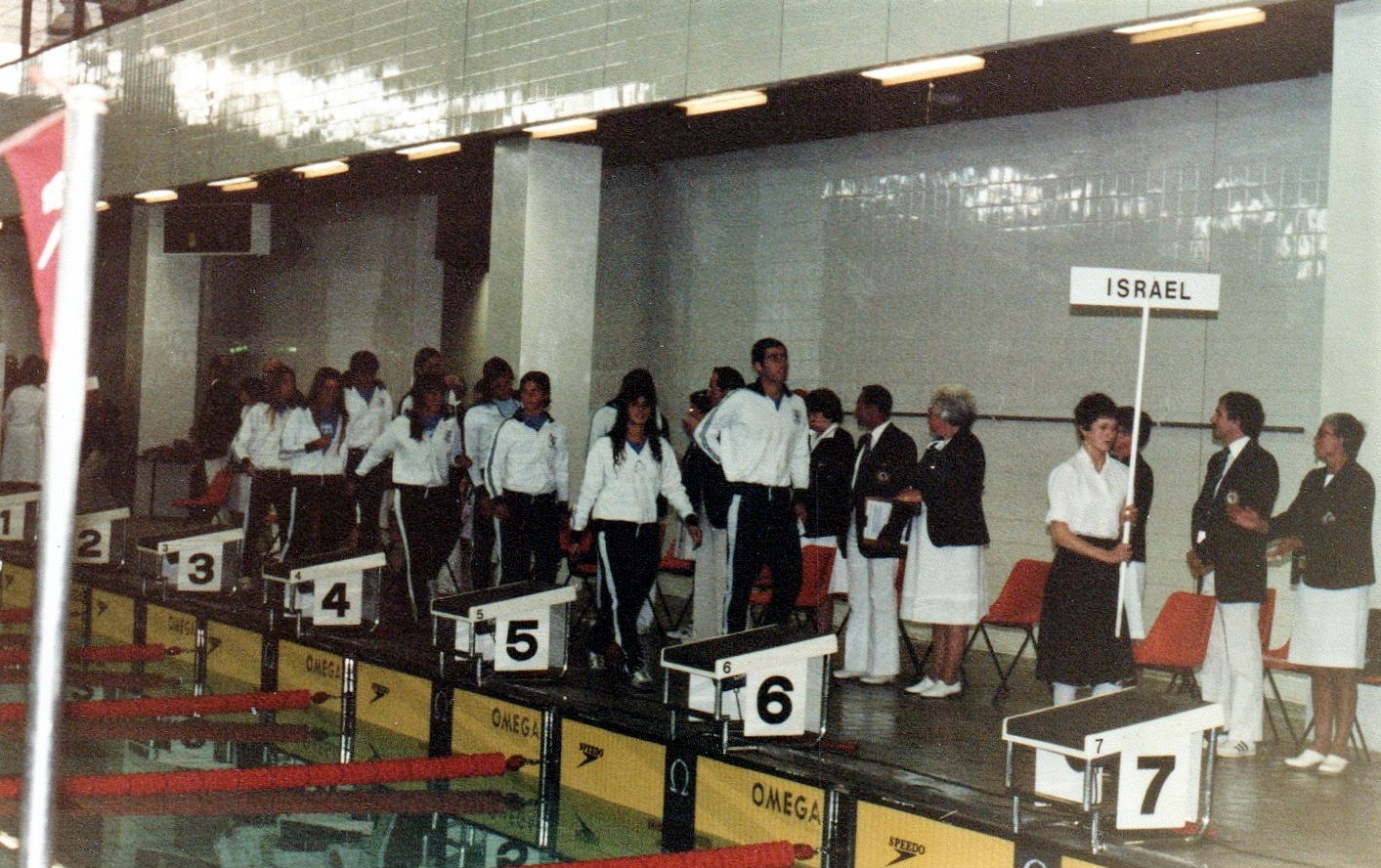 The Israeli National Swim Team in Europe in 1980. Credit: Courtesy.

Given Kupfer’s deep and extensive ties to the swimming world, as well as to Israel and the Jewish people, she is well-suited for the film project. She grew up in a strongly Jewish-identified and Zionistic home in South Florida and was a self-described “big Florida swimmer” by age 12.

Her late father, Dr. Sanford Kuvin (who died in 2015), was a physician and world-renowned researcher of infectious and tropical diseases. In 1970, he was invited to lecture at Hebrew University. When her mother, Gabrielle, went to Israel for the first time soon after his visit, she felt that Israel was where she truly belonged. The Kuvins considered aliyah (immigration to Israel), but Kuvin’s medical practice in the United States made that difficult.

Still, the family began splitting their time between Israel and the United States. 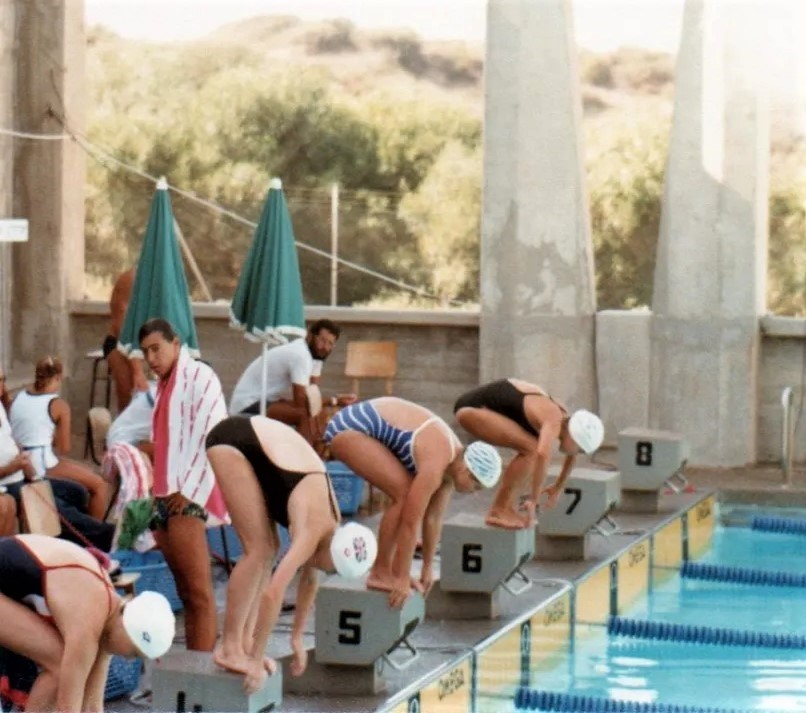 Swimmer Michele Kupfer (then Kuvin) diving off block No. 5 in 1981. Credit: Courtesy.

“We were all in; we bought an apartment in Israel and spent three to four months a year in Israel,” reported Kupfer. In 1976, her father founded and acted as the chairman of the Hebrew University of Jerusalem’s Sanford F. Kuvin Center for the Study of Infectious and Tropical Diseases, the world’s leading research center for malaria and other infectious diseases.

Kupfer looked forward to their months each year in Israel, though noted that she was worried she might not be able to continue swimming. “I said to my dad: I can’t go to Israel and not swim!” She joined the YMCA in Jerusalem and began to swim regularly at the pool there. “In 1977, I was 14, and Israel was already thinking about the 1980s Olympics. Kupfer remembered thinking, “Israel swimming is pretty damn good as a team, but they wouldn’t have made it to the [medal] podium.”

She was pleased when asked to consider joining the national team. “It didn’t take me a second to say, ‘Are you kidding me … YES!” She then became an Israeli citizen. She recalled that “it wasn’t easy. Some had the feeling I was taking a spot from another Israeli while I was going back and forth” from Israel to America.

Kupfer made the 1980s Olympic team as a 17-year-old. “I was a little scared; there was so much hatred. We discussed it with our peer group. We figured we’d go as a team, and [for safety] they wouldn’t let us out.” The Israeli team ultimately did not go due to the boycott of the Moscow Olympics.

But in 1981, Kupfer got her chance to swim on a large world stage. “The 1981 Maccabiah Games became a huge focus. I wanted to represent Israel and show the world what we were capable of.” The team won the gold medal, and Kupfer said she still becomes emotional looking back at the awards ceremony. “Playing ‘Hatikvah’ (at the medal ceremony)—there is nothing like it!” 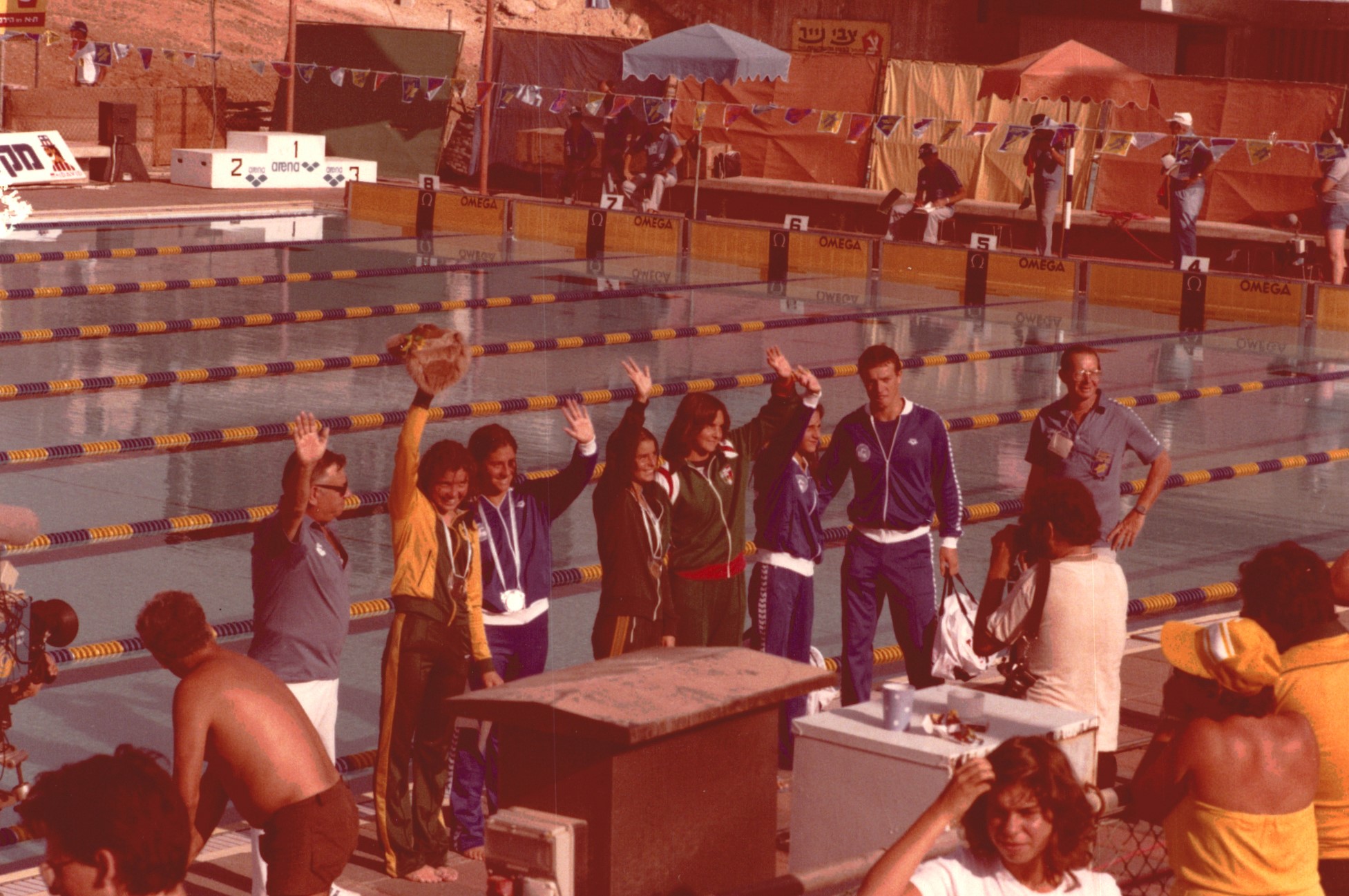 Michele Kupfer (then Kuvin) at the 1981 Maccabiah games. Credit: Courtesy.

‘The power of sports’

Kupfer has continued to swim for most of her adult life as a way to stay in shape. “I never thought of competing … until now!” In just a week, she will have an opportunity to both swim and produce a film that will tell the important story of the Maccabiah to the world.

Former teammates and members of the Israeli swimming community share Kupfer’s excitement for both the reunion and the field. Constantini, the sports-medicine professor, proclaimed that the reunion is “very exciting.”

She pointed out an especially poignant personal connection: “For me, it is also a kind of memorial for the late Lior Birkhahn, who I coached from the age of 8, and who swam with Michele.” Birkhahn was an Israeli swimmer who died of cancer at age 56 in May 2020; her 14-year-old daughter, Gili, is competing this year in the Maccabiah games.

As for Constantini, she is swimming in memory of her late mother, Aliza Wirz, who won in the Third Maccabiah Games in 1950. “That was 70 years ago!” she says proudly.

Constantini said Kupfer’s film is important because it shows the connection “of all of us—Jewish people from Israel and the Diaspora—as part of a big nation with a long tradition.”

Krayzelburg, 46, who runs a swim academy for kids, continues to be a big supporter of both the Maccabiah and the film. “Maccabiah is an incredible celebration of Jewish heritage in our eternal homeland. Through the power of sports, it is able to bring together Jews from all corners of the world to Israel with a meaningful purpose to celebrate and honor our rich culture and heritage. Being part of this incredible event has always been a humbling and touching experience for me, and Michele’s film will share some unique and inspiring experiences of athletes that ‘lived’ the games and how it has impacted their lives.”

Thanks to the Maccabiah Games, some 10,000 athletes from 80 countries will soon arrive in Israel to compete in more than 40 sports. And thanks to Michele Kupfer’s passion and to “Parting the Waters: The Story of The Maccabiah Games,” the impact will be felt for generations. 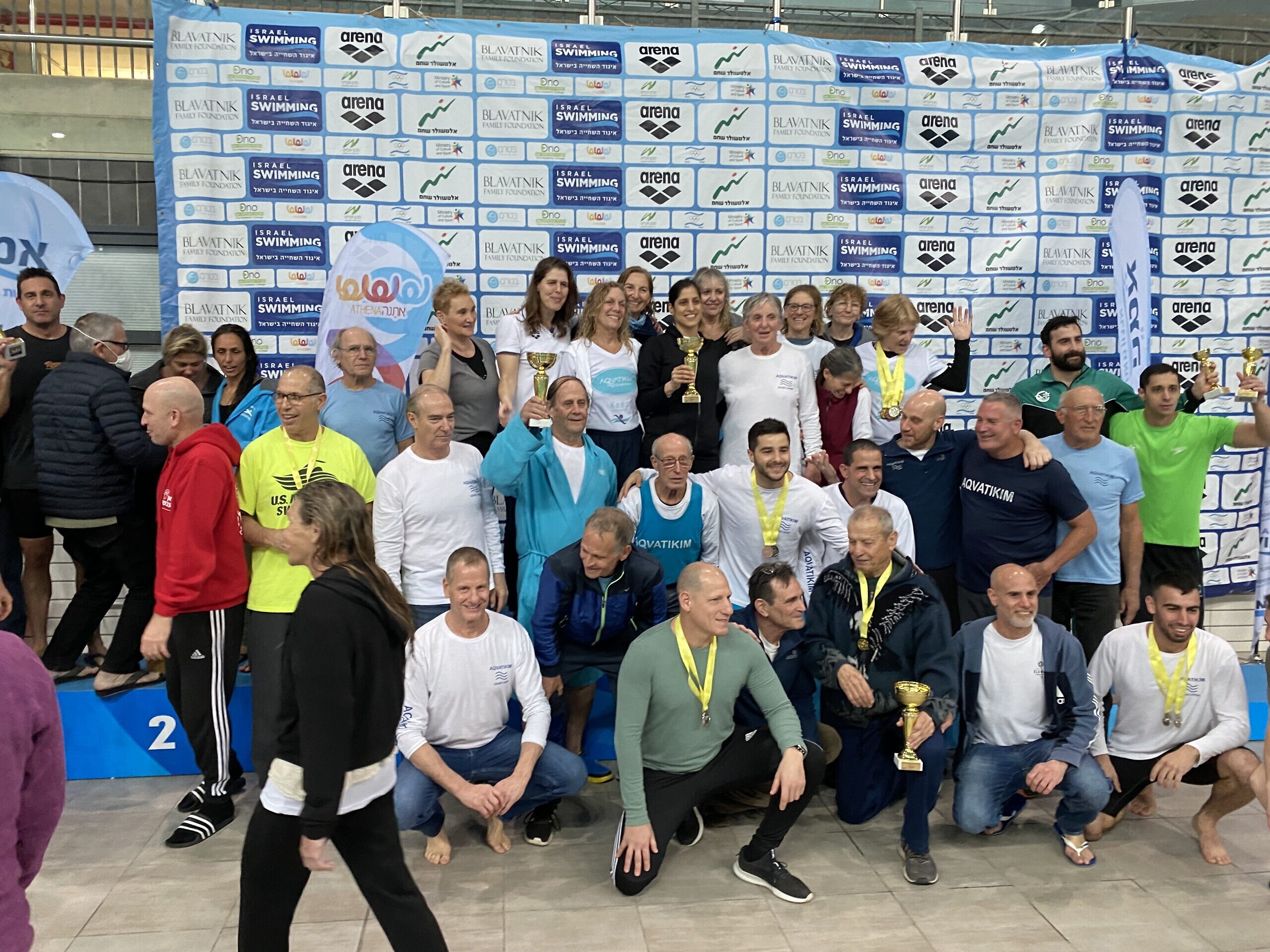 Members of the 1981 Israeli National Swim Team reunite after 40 years. Credit: Courtesy.
Republish this article in your newspaper or website