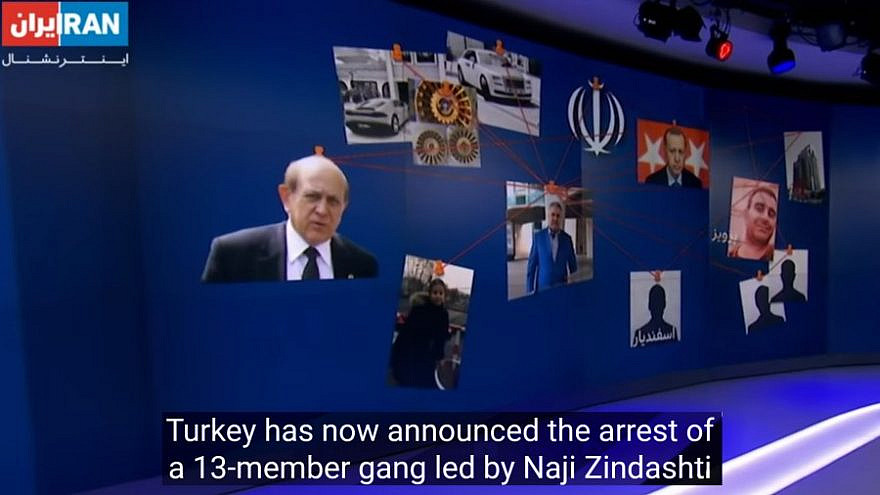 (December 27, 2020 / JNS) A series of articles published recently in the Turkish, British, and American media indicate that Iranian intelligence is making effective use of major international crime organizations and drug cartels in several countries to advance its goals, notably capturing dissidents in the diaspora. These organizations have affiliates in other countries, for example, Romania, a country where a senior Iranian judge was recently assassinated during a mysterious trip.

One such organization has become the long arm of Iranian intelligence. It is run by Naji Sharifi Zindashti, born in Oroumieh, Iran, and the son of a Peshmerga fighter. Zindashti was detained in Evin prison after a conviction for drug trafficking at the age of 20. He escaped from prison and lived in Turkey for many years. Zindashti had contacts with Turkish politicians in President Recep Tayyip Erdoğan’s AKP party, but he made sure to donate financially to the organization headed by Fethullah Gülen, the leader of the Turkish opposition in exile who resides in the United States.

Zindashti was reportedly a secret witness in the Ergenekon trial, and detained on charges of attempting to topple the Turkish government. He was mysteriously released from prison in 2010 after his arrest in 2007 in Turkey for possession of 75 kg of heroin.

A ‘honeytrap’? The recent kidnapping by an Iranian ‘Swallow’

A video broadcast on Sky News on Dec. 16 portrayed the kidnapping in October of Habib Farajula Kaab, known as Habib Assyud in Turkey, in what the network called a “honeytrap.” Assyud was vice president of the Executive Committee of the Arab Struggle Front for the Liberation of Ahvaz (ASMLA), a party working for the rights of Iran’s Arab minority. The Turkish Ministry of Justice issued a “Red Notice” from Interpol to arrest a woman named Sabreen Saeedi, (apparently a Sununuh or “Swallow” agent) for alleged involvement in the Assyud abduction. The video footage showed Saeedi luring Assyud to fly from Sweden to Turkey and meeting him in a petrol station 80 km from Istanbul. He was then abducted by Zindashti’s gang and driven 1,600 km to Iran to stand trial. 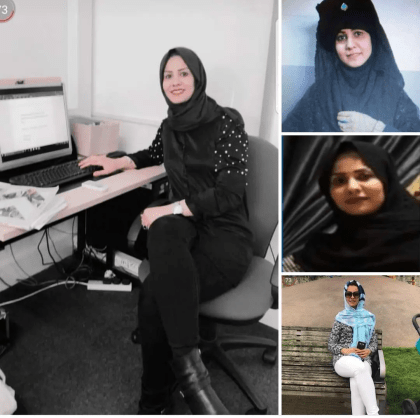 Another Sununuh agent, Sherine Najaf, is suspected of luring dissident journalist Ruhollah Zam from Belgium to Iraq, where he was kidnapped. Ram was executed by hanging on Dec. 12. 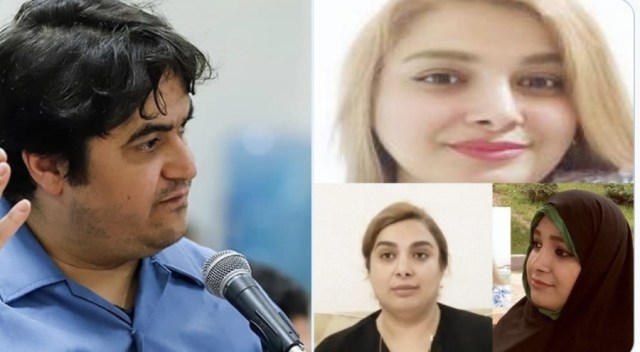 In 2018, Zindashti and members of his gang were charged in Turkey with drug trafficking, the murder of another Iranian ex-pat named Saeed Karimian, the founder and director of JAM TV channels, and drug-related killings. They were soon released, apparently as a result of a combination of lawbreaking, bribery, lack of evidence and political pressure from sources close to Erdoğan. 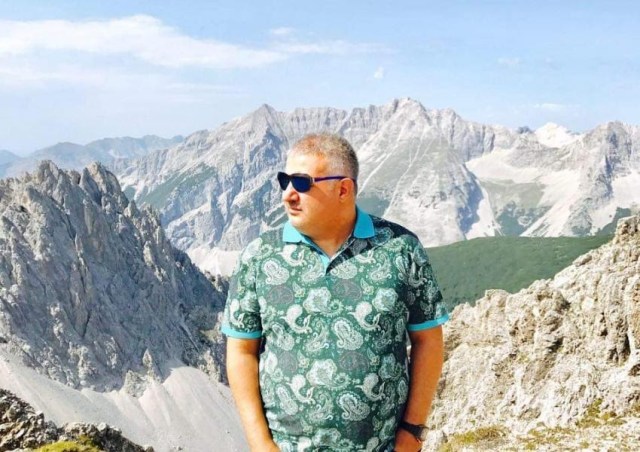 Zindashti, the head of a criminal and drug trafficking organization, served the long arm of Iranian intelligence in Turkey and Romania.

Exiled Iranian journalists working for Iran International television station in London reported that they had received indications that Zindashti was also involved in the assassination of a senior Iranian judge, Gholamreza Mansouri, at a hotel in Romania’s capital in June 2020. According to the station, Zindashti passed an order from Iran to his cousin, Hossein Karimi Rickabadi, a well-known international criminal in Romania, to eliminate the judge, who held considerable information about the corruption of senior Iranian regime figures.

Mansouri’s death was ruled a suicide (he jumped from the fifth floor of his Bucharest hotel), but his family raised many questions about the cause of death and why Iranian diplomats instructed him to go from Germany to Romania after receiving medical treatment in a German hospital. They claim his mysterious transfer to Romania happened to avoid assassinating him on German soil, which would have come at a high diplomatic, political and economic price for the Iranian regime. 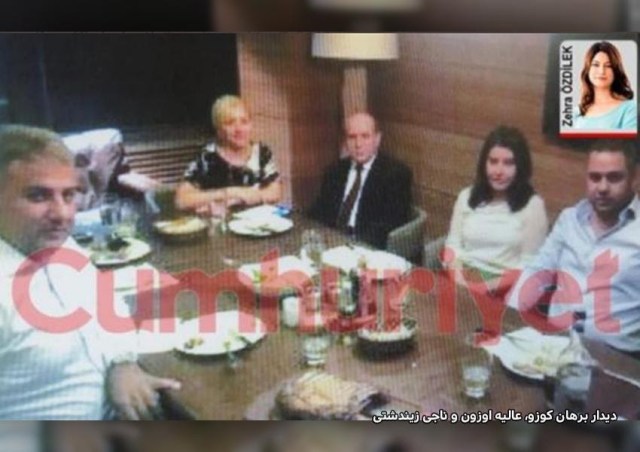 Zindashti, the international mobster and Iranian intelligence co-conspirator (left), and his wife were friends of both Erdogan’s adviser and his Turkish opponent Fethullah Gülen. Here he is pictured with AKP Party deputy Burhan Kuzu (in tie). Source: Cumhuriyet.

Zindashti was also wanted in Greece in 2014 after the discovery of the largest shipment of heroin in European history. After the two-ton shipment was uncovered on a freighter, a series of mysterious murders took place in various countries. In September 2014, Zindashti’s 19-year-old daughter, Arzu Sherifi Zindashti, was shot dead in Istanbul’s Büyükçekmece district on her way to Istanbul University. Zindashti’s partners in the drug deal found themselves on the receiving end of the mob boss’s rage. Media outlets in Turkey, Greece and other countries pointed the finger at Zindashti in connection with at least 10 murders.

After 13 years under surveillance in Turkey for killing his opponents, Zindashti probably realized that returning to Iran would be a smarter act, and that if he cooperated with Iranian intelligence, he could also run his organization in Turkey from Iran, thus securing his future.

Many high-profile murders and abductions of Iranian exiles are attributed to Zindashti’s organization:

• On May 30, 2017, Saeed Karimian and his Kuwaiti partner, Mohammed Mutayeb Salihi, were killed in an attack on a private vehicle in Istanbul’s Sharir district. Turkey said that the assassin fled (presumably to Iran).

• On Nov. 14, 2019, Masoud Mulvey, founder of Telegram Black Box, which published information about Iranian intelligence, was murdered on a major street in Istanbul. According to Turkish security officials, the gunman was a gardener at Zindashti’s villa in Istanbul. The perpetrator was apparently arrested.

• On Oct. 23, 2020, Assyud was abducted from Turkey by the Zindashti gang and transferred to Iran. The crew, numbering 13 people, was recently arrested by Turkish security forces.

• In January 2019, Dutch Foreign Minister Stef Blok revealed that his government’s secret service “had strong indications that Iran was involved in the assassinations of two Dutch nationals of Iranian origin, in Almere in 2015 and The Hague in 2017.” He defined the Iranian actions as “blatantly damaging to Dutch sovereignty and completely unacceptable.” The victims were Ahmad Molla Nissi, a senior ASMLA official murdered in November 2017 at the doorstep of his home in The Hague, and Ali Motamed, who was murdered near his home in Almere in December 2015. Hezbollah maintains ties with Dutch criminal elements in various fields, including drug trafficking.

• In recent years, European intelligence services have uncovered—with the assistance of Israeli intelligence—several other attempts by Iran to target Iranian opposition activists on European soil.

• In 2018, Albania expelled Iran’s ambassador and another diplomat, who it claimed were involved in efforts to target opposition figures in the country. Then, in January 2020, Albania expelled another two Iranian diplomats for “endangering Albania’s national security.” The two were identified as an Islamic Revolutionary Guard Corps official and a member of the Iranian Intelligence Agency MOIS. They were reported to be associates of Quds Force commander Gen. Qassem Soleimani.

• In October 2018, Danish and Swiss officials uncovered an Iranian agent intent on assassinating an ASMLA activist in Copenhagen.

Iran’s intelligence services, including the Intelligence Ministry and IRGC (especially its Quds Force operating outside Iran), use various “covers” for their intelligence and terrorism activities. Iranian embassies, consulates and delegations traveling abroad serve as cover for terrorist activities and intelligence gathering, while Iran uses Iran Air aircraft for similar purposes. Iranian intelligence officials also turn to international crime and drug cartels (such as the attempt to murder the Saudi ambassador to the United States in 2011) to carry out assassinations and gather intelligence, and use drug money to finance their activity, which hides official Iranian involvement.

Meanwhile, mobster Zindashti fled to Iran, where he lives a public life, working openly with the Iranian Intelligence Ministry and, according to “informed sources,” running his drug business.

Iran has claimed for decades that “unsung soldiers” of its intelligence services are deployed across the country and beyond. It is now clear that at least some of these “unsung soldiers” are operating through major crime and drug trafficking organizations.

It should be noted that over the years, even as Iran has carried out assassinations in European countries, these Western nations have maintained trade relations with it, while ignoring repeated human rights violations in Iran and global terrorist operations outside it. Even now, despite the sanctions imposed on the Iranian Intelligence Ministry, the European Union’s primary interest is to continue the economic ties with Iran. This is despite the pressure from human rights groups to condition the issue of economic cooperation to improving the regime’s conduct in the area of human rights violations.

Iran’s “Teflon shield” may provide more immunity ahead of U.S. President-elect Joe Biden’s entry into the White House in January and the possibility of a U.S. return to the framework of the JCPOA nuclear agreement in 2021.