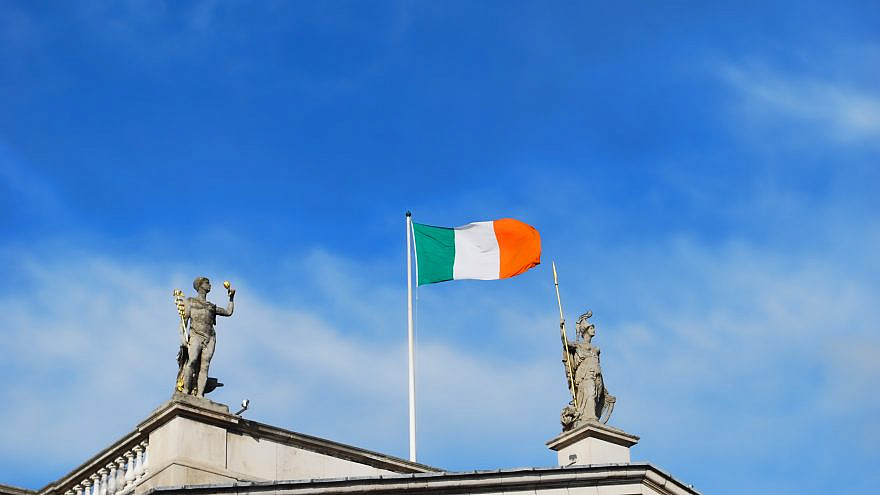 (May 26, 2021 / JNS) The Irish government has endorsed a parliamentary motion condemning the “de facto annexation” of the West Bank by the Israeli government, becoming the first European Union country to do so.

Irish Foreign Minister Simon Coveney supported the motion and condemned what he said was “manifestly unequal” treatment of Palestinians.

“The scale, pace and strategic nature of Israel’s actions on settlement expansion and the intent behind it have brought us to a point where we need to be honest about what is actually happening on the ground. … It is de facto annexation,” Coveney told parliament.

“This is not something that I, or in my view this house, says lightly. We are the first E.U. state to do so. But it reflects the huge concern we have about the intent of the actions and of course, their impact,” he said.

However, Coveney said that a condemnation of the recent rocket attacks on Israel by the Palestinian terrorist group Hamas must be added to the statement before he agreed to government support for the motion.

“The acts of terror by Hamas and other militant groups in firing rockets indiscriminately into Israel … cannot and should not ever be justified,” said Coveney.

However, the opposition Sinn Féin party, which brought forth the motion, refused to support the government amendment condemning the Hamas rockets.

Israeli control over the West Bank, also known as Judea and Samaria, has been considered by much of the global community as illegal under international law. By defining the territory as “annexed” instead of “occupied” would mean that Palestinians would technically live inside of Israel without citizenship rights. In the past, Palestinian officials have accused Israel of annexing the territory.

In a statement, the Israeli Foreign Ministry outright rejected Ireland’s “outrageous and baseless position” regarding Israeli communities in Judea and Samaria.

“The motion that was adopted today in the Irish parliament constitutes a victory for extremist Palestinian factions. This motion distances Ireland from its ambition to contribute and play a constructive role in the Israeli-Palestinian context,” it said.

Jackie Goodall, executive director of the Ireland-Israel Alliance, called the adoption a “damaging day for Ireland’s reputation on the world stage.”

“In one day, Ireland backed a PLO resolution to single out Israel as a violator of health rights, passed with the support of all politicians and parties in the Dáil a motion to make Ireland an outlier in the EU, and 46 TDs backed the expulsion of the Israeli Ambassador,” she said, referring also to Ireland’s support of an anti-Israel motion at the World Health Organization.

“Ireland’s actions today do not serve the cause of peace. Rather they embolden Palestinian terrorism, from Hamas war crimes to the Palestinian Authority’s Pay-For-Slay policy.”

She added: “Israel continues to have friends here in Ireland, but can count no friends amongst the politicians in Dáil and Seanad Éireann.”