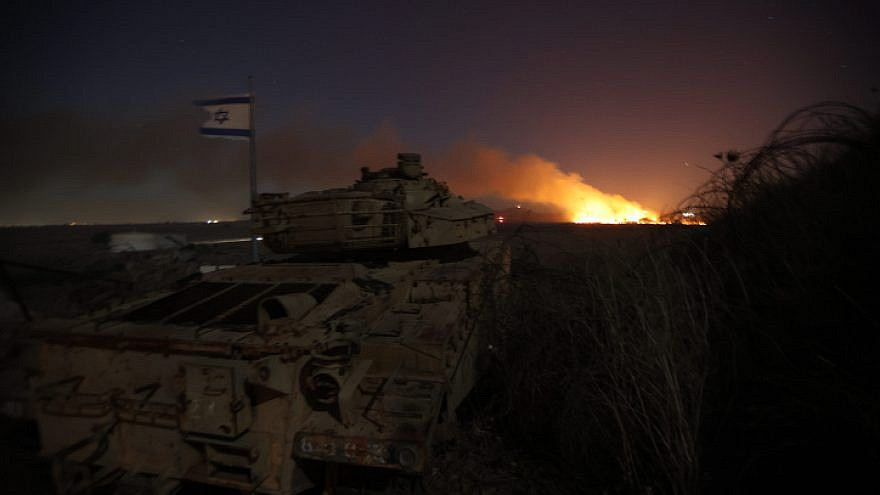 (January 13, 2021 / JNS) Media reports carried news of intensive airstrikes against Iranian-linked targets in eastern Syria early on Wednesday, attributed to the Israeli Air Force. The alleged strikes in the Deir al-Zour and Albu Kamal areas were the latest in a long series of reported Israeli attacks that are designed to thwart the Islamic Republic’s attempts at building a war machine in Syria.

The airstrikes nevertheless stood out in light of the extraordinary comments made by a senior American intelligence official, who told the Associated Press that the bombings were enabled by intelligence provided to Israel by the United States.

There appears to be no reason to doubt this version of events, marking what would seem to be an unusual acknowledgment of the close level of cooperation between the American and Israeli defense establishments in combating the Iranian presence in Syria.

Strikingly, the same official said that the targeted warehouses also served as a “pipeline for components that support Iran’s nuclear program,” though no further details were immediately available.

A second reason that makes the strikes stand out is the unconfirmed report by a Syrian opposition war-monitoring group that at least 57 fighters were killed, including 14 Syrian regime soldiers, in addition to Iranian-backed militia members, as well as dozens more wounded.

Although uncorroborated, the claim represents a far higher casualty count than those that usually follow such strikes.

The attack is part of an unmistakable increase in airstrikes that have been hitting Iranian targets across Syria, marking the fourth known such incident in the past three weeks.

Those incidents include a reported missile attack on Syria’s Scientific Studies and Research Center, also known by its French acronym CERS, north of Damascus. CERS is a facility that is responsible for developing and manufacturing advanced missiles and chemical weapons, and is likely used by both Iran and Syria’s Bashar Assad regime to develop and produce weapons systems, some of which is also destined for Hezbollah’s missile depots in Lebanon.

CERS was also bombed in 2018 and 2019. The area surrounding CERS doubles up as a base for Iranian personnel and Iran-controlled militias in Syria. The other recent attacks have hit reported weapons-production facilities and military bases in southern and western Syria.

In attempting to understand why the uptick in alleged preventative Israeli attacks has occurred now, Israel’s former ambassador to the United Nations Danny Danon offered this explanation: “Iran is attempting to take advantage of the transition in the United States and in Israel to alter the balance of power. Israel and the U.S. will not allow this. We will act resolutely and as needed.”

According to this explanation, Iran is trying to exploit political instability in Israel, which is on its way to its fourth elections in less than two years. That is coupled with the fact that the Trump administration is about to be replaced by the Biden administration, all while Tehran attempts to scale up its efforts to build a military foothold in Syria.

Ebb and flow of Tehran’s efforts over the years

It is also important to place the latest incidents in the wider context: Israel has struck thousands of Iranian targets in Syria in recent years, according to comments made in 2019 by former Israel Defense Forces Chief of Staff Lt. Gen. Gadi Eizenkot.

The centerpiece of Eizenkot’s legacy is a low-profile, yet highly effective, campaign of preventative airstrikes to severely dent Iran’s “Syria project” and to roll back Tehran’s attempt to turn Syria into an extension of the attack front that it built in Lebanon, where Iran has helped Hezbollah take hold of some 130,000 rockets and missiles, and point them at Israeli cities and strategic targets.

In its annual summary for 2020, the IDF stated that “approximately 50 targets were struck on the Syrian front” in the past year, as well as more than 1,400 battle-formation Israeli Air Force sorties over unspecified areas.

The campaign against Iran in Syria has been raging for several years, and often, it is the same sites that are hit over and over again.

For example, in March 2020, reports said that unidentified aircraft struck a target in Albu Kamal, the town on the border with Iraq, where Iran had been constructing its Imam Ali military base for the deployment and storage of missiles and fighters. A total of 26 fighters were allegedly killed in that attack.

The Iranians had apparently been building a tunnel for hiding weapons at the Imam Ali Base, which replaced an older tunnel also attacked in the past.

In June 2020, reports also said that 12 people were killed in an airstrike on an Iran-linked target in Deir Ezzor in eastern Syria, which sits five kilometers (about 3 miles) from the Iraqi border.

Deir Ezzor and Albu Kamal are areas that are earmarked by Iran for the construction of a land corridor that would allow Tehran to move weapons, battle formations, and other resources into Syria from Iraq. If the corridor is completed, Iran would have land access all the way to the Mediterranean Sea, connecting Iran, Iraq, Syria and Lebanon along a single network of roads.

Israel has no intention of letting that happen, just as it did not allow Iran to fly cargo planes of advanced missiles into Damascus airport with impunity.

Iran’s efforts are being masterminded by its overseas subversion and terrorism unit, the Quds Force, headed by Esmail Ghaani, who replaced the infamous Maj. Gen. Qassem Soleimani after his assassination in Baghdad in January 2020 in a U.S. drone strike.

Ghaani appears to be working hard to try and fill Soleimani’s shoes, though with little apparent success to show for it so far.

Soleimani’s grand vision was to create air smuggling routes, a land corridor, and naval smuggling routes to flood Syria and Lebanon with precision-guided weapons, bases, missile factories, and militias, and Israel kept that vision firmly in check, just as it is doing with Ghaani’s efforts.

Russia, for its part, has no interest in allowing Iran to take over Syria, having earmarked the country for its own long-term military presence and economic reconstruction programs. Still, Moscow is also keen to avoid witnessing an escalation that can threaten the Assad regime, which it spent years protecting from demise together with Iran.

Meanwhile, the atmosphere in the region is particularly explosive and unstable, due to Iran’s determination to seek vengeance for the killing of its chief nuclear-weapons scientists, Mohsen Fakhrizadeh, whom Iran blames Israel for assassinating in November, as well as Hezbollah’s own repeated threats to take revenge for the death of one of its operatives, who was killed in an airstrike on an Iranian target in Syria in July.

Military tensions between U.S. forces in the Persian Gulf and Iran also remain high with the possibility of miscalculation is very real.

None of these factors, however, are sufficient to deter Israel from enforcing its red lines in Syria and doing whatever is necessary to keep Iran from fulfilling its dangerous “Syria project.”