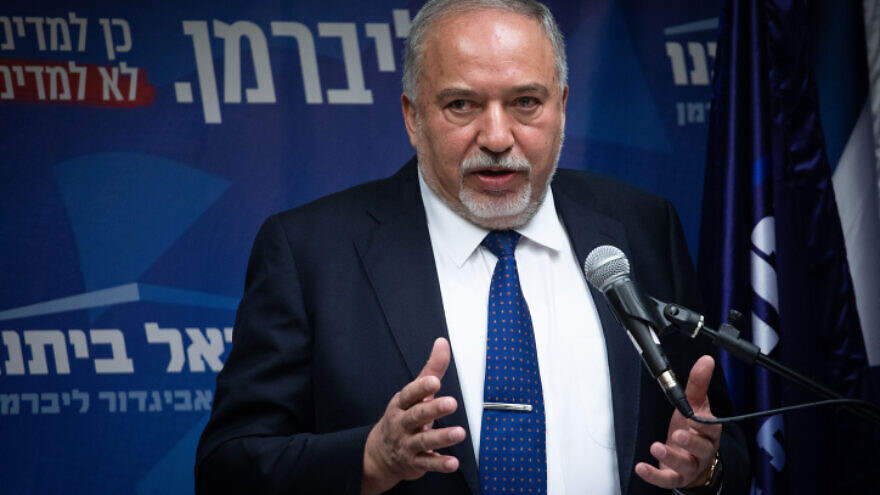 Yisrael Beiteinu Party leader Avigdor Lieberman speaks with the media during a faction meeting in the Knesset in Jerusalem on Dec. 2, 2019. Photo by Hadas Parush/Flash90.
Spread the word.
Help JNS grow!
Share now:

(December 5, 2019 / JNS) Yisrael Beiteinu Party leader Avigdor Lieberman said on Tuesday that Israel is headed to its third round of elections with the course of a year.

“Elections are coming,” Lieberman told the Yediot Achronot daily in an interview. Unity talks had reached a dead end, he said, and he had decided against empowering a narrow government because “the combination of dramatic defense and economic decisions and a narrow government is likely to create a large rift and polarization in [Israeli] society.”

Though the addition of Lieberman’s eight mandates to either the right-wing or a left-wing bloc, including the Arab parties, would allow Israel to avoid elections, he said both the Likud, and Blue and White leaders had made this impossible.

“To my regret, both [Gantz and Netanyahu] took a strategic decision to not go to unity; therefore, the two parties are responsible for another round of elections,” said Lieberman. “Our hands are clean.”

On Wednesday, Likud Knesset member Miki Zohar told Israel National News that Likud had engaged in negotiations with Lieberman to try to get him to join a Netanyahu-led bloc, but were “unable to reach understandings with him, unfortunately.”

Lieberman has said he would join a right-wing bloc if the Likud were to make major shifts in its views on Jewish religion and state connections, an agreement Likud would not make.