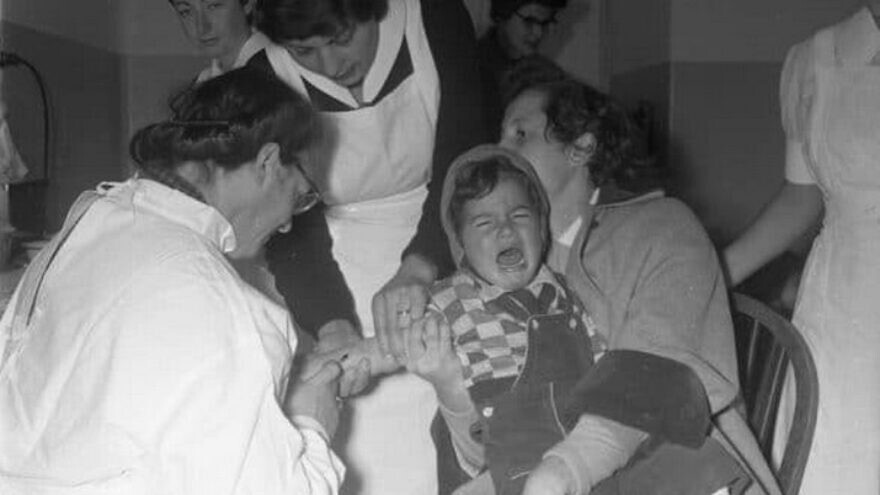 A child afflicted with polio is treated at the Tzrifin army base in Israel, during a visit by Hadassah representatives and Israel Police officers, 1954. Credit: The Eddie Hirschbein Collection.
Spread the word.
Help JNS grow!
Share now:

(March 7, 2022 / Israel Hayom) A four-year-old boy from Jerusalem has contracted the first known case of polio in Israel since 1989, the Health Ministry reported on Sunday.

A ministry official told Israel Hayom that the child was in state of weakness and in a condition that could deteriorate to paralysis.

According to the ministry, neither the child nor his family had been vaccinated against polio.

The Health Ministry thinks that the child from Jerusalem is just one of hundreds or thousands of children who might have been exposed to a mutant strain of polio.

“The population vaccinated against polio is protected. But this could be significant for the unvaccinated population, and the recommendation is to get vaccinated. It’s disturbing, mostly because this is completely preventable disease,” Health Ministry officials said

The Jerusalem District Health Bureau has begun contact tracing in the case of the four-year-old, and will notify anyone suspected of having come in close contact with him. Once the contact-tracing process is complete, health officials will issue recommendations.

Dr. Ian Miskin, an expert in infectious diseases and family medicine at the Jerusalem district of Clalit Health Services, said that it was extremely rare for children to contract polio through the weakened poliovirus vaccine, but that there had been documented cases of this happening in the world.

“This doesn’t mean that there is an outbreak of polio in Israel, but rather that we need to vaccinate the population. The weakened poliovirus vaccine is the best vaccine to prevent the disease. Anyone who has gotten two doses of the vaccine and a booster has no reason to worry,” Miskin said.