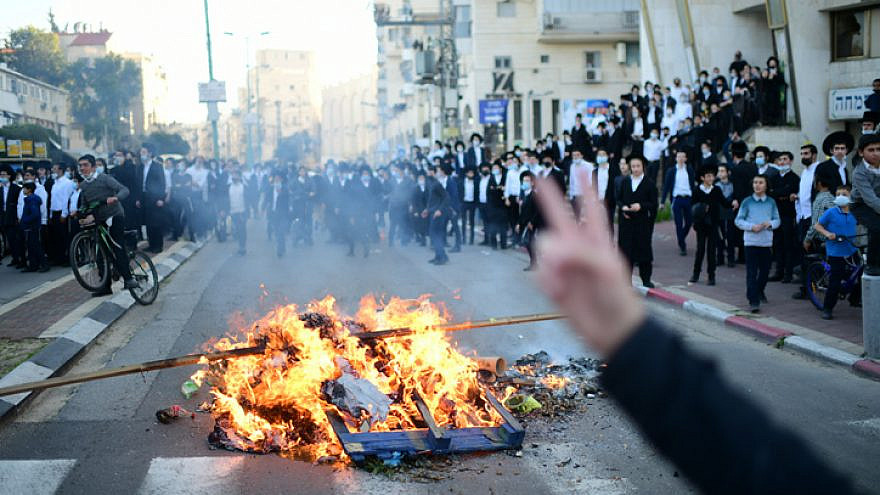 Israeli police clash with ultra-Orthodox Jews during a protest against police enforcement of the country's COVID-19 lockdown in the city of Bnei Brak, Jan. 24, 2021. Photo by Tomer Neuberg/Flash90.
Republish this article
674 WORDS
Spread the word.
Help JNS grow!
Share now:

(January 26, 2021 / Israel Hayom) Several Israeli religious leaders on Monday denounced the violent riots that broke out the day before in the ultra-Orthodox city of Bnei Brak when police tried to enforce the national COVID-19 lockdown.

Leading rabbinic authorities Rabbi Chaim Kanievsky, who has consistently ordered his followers to continue studying in groups despite schools being shuttered due to the lockdown, and Rabbi Gershon Edelstein, condemned the violence, calling rioters “reckless individuals who spark the flames of violence.” In a letter, the rabbis ordered their followers not to join the protests or even observe them from afar, as doing so can “harm one’s soul.”

Sunday’s riot was among the most violent ever seen in the city. Officers who arrived to enforce lockdown directives were met by a mob that clashed with the troops, pushed dumpsters into the street and set them on fire and hurled fireworks at the police. The mob also attacked reporters and photographers for Channel 13 News and the Kan public broadcaster, hurling various objects at them, including rocks.

The most shocking moment came when protesters stoned a bus trying to make its way through one of the city’s streets, and then commandeered it. They forced the driver and the passengers out, then set the bus ablaze.

The driver, Eyal Tzipori, said he feared for his life.

“This was nothing short of a terrorist attack. I was stunned—what is happening to people? This mob wanted to take out its rage on my passengers and me. We barely escaped with our lives. This could have ended with a disaster,” he said.

Kanievsky invited the driver to his home on Monday and denounced the incident again in their conversation.

According to police, several officers were injured in the riot, including one who suffered a head injury.

Sephardi ultra-Orthodox leaders, too, issued a harsh censure of the violence, ordering followers to stay away from the rioting at all cost.

Sephardi Chief Rabbi of Israel Yitzhak Yosef said he was “appalled to hear of the violence in Bnei Brak,” describing their actions as “sacrilege.”

“The violence by a group of youths who have obviously strayed from the ways of the Torah and our norms are utterly unjustified. Such acts cannot be carried out in the name of the Torah—to say that is blasphemy. These outlaws must be condemned in every way,” he said.

Shas Party Council of Sages head Rabbi Shalom Cohen issued a decree “absolutely barring Shas supported from being anywhere near such riots, which contradict the way of the Torah in every way. Do not partake in such unforgivable sacrilege.”

‘Restore order to our streets’

“The Israel Police carries the blame for the catastrophe taking place in our city for several days,” he said, accusing law enforcement of engaging in “provocative activity” and “collective punishment” against the city’s residents.

However, Rubinstein seemed to change his tune on Monday after a meeting with Tel Aviv Police Commander David Bitan, saying, “We will not allow fringe elements to undermine the fabric of living in the city. We will coordinate with the police to restore order to our streets.”

United Torah Judaism Knesset member Moshe Gafni, for his part, denounced the police, saying, “It is inconceivable that the police, because of a violation on the beach in Tel Aviv, will close off a neighborhood and fire grenades and spray [teargas].”

“Next, the defense minister will be calling in the air force,” he said.

“What we’ve seen in Bnei Brak—that not Bnei Brak rather fringe groups that taint the residents, who are law-abiding citizens. I urge the city to restore the cooperation it has always had with the police. Don’t turn Bnei Brak into a battlefield.”

Avi Cohen and Efrat Forsher contributed to this report.