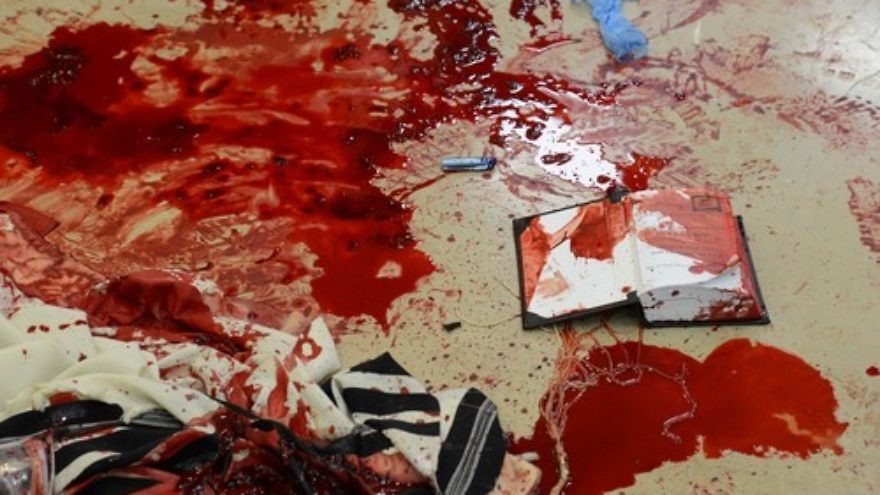 Blood on prayer shawls and a siddur inside the Kehilat Bnei Torah synagogue in Jerusalem following the terrorist attack that took place there on Nov. 18, 2014. Cerdit: Kobi Gideon/GPO/Flash90.
Republish this article
933 WORDS
Spread the word.
Help JNS grow!
Share now:

(November 21, 2014 / JNS) Seven a.m. It’s an hour when most are still battling with an insistent alarm clock. But for those intent on being part of a morning minyan (prayer quorum), it’s prime time for showing up at synagogue to thank God for the vast possibilities of a brand new day.

On Nov. 18 in Jerusalem’s Har Nof neighborhood, that morning routine was unspeakably shattered. With the images of the slaughter at Kehilat Bnei Torah still fresh in the minds of Israelis and not likely to go away anytime soon, leaders of synagogues around the country are grappling with setting the right tone and safety procedures for an uncertain future.

In the days that followed the attack, thousands came out to mourn the four murdered rabbis and the slain Druze policeman who tried to save them. While it seems that almost everyone in Israel is personally connected to at least one of the victims in some way, those who are not still feel immense sympathy for their fellow Jews who were gruesomely killed while wrapped in tallit and tefillin by Palestinian terrorists wielding butcher knives, axes, and a gun.

How does this attack affect the Jewish state’s roughly 11,000 other synagogues, which in many neighborhoods can be found on virtually every block?

“Of course, we are all reeling from this terror that has echoes of [the] Kishinev [pogrom] over 100 years ago and [the] Hevron [massacre] in 1929,” says Rabbi Daniel Beller of the Kehillat Shivtei Yisrael synagogue in Ra’anana.” He adds, “Yes, we do plan to be more vigilant at shul.”

That commitment to heightened security is a common theme in conversations with Israeli synagogue leaders, particularly concerning Shabbat services. At the Mizmor LeDavid synagogue in the trendy Jerusalem neighborhood of Baka, where more than 200 crowd into the building each Friday night for a rousing Kabbalat Shabbat service, there is talk of hiring a guard—someone who packs a gun and knows how to use it.

“We know we need to do this. Though it’s certainly not anything we ever wanted to do,” says Naomi Goldberg, wife of Rabbi Mordechai Goldberg, the congregation’s leader.

Over in Maale Adumim, Ze’ev Orenstein is president of the Nachalat Yehuda congregation, which attracts a mix of young and old to Shabbat services. “I don’t think anyone is panicking or planning to stay home on Shabbos out of fear,” he says. “But, though on the one hand it’s important not to panic, on the other hand, we also need to be alert around our congregation’s safety.” At Nachalat Yehuda and many other shuls, that means having volunteer “shomrim” (guards) take shifts during services and get training from the city’s police force.

“It’s been a difficult week but this is not the first time Jews worshipping have been targeted, and we have to learn how to deal with a minority who doesn’t want us here,” says Orenstein. “But one of the blessings of the sovereignty of having a Jewish state is that, thank God, after 2,000 years in exile, we have police and an army whose job it is to protect us. That’s something our grandparents and great-grandparents never had.”

At one of Tel Aviv’s busiest synagogues, Beit Daniel, “hundreds of people come into our building every day, not just on Shabbat,” says Rabbi Meir Azari.

“And in this day and age we have to have a guard,” says Azari, who reports that since the second Palestinian intifada (uprising), when one of its members was killed in a bus bombing, the congregation has made use of a security camera and an alarm that alerts the police when triggered.

“Of course, the cost of all of this is enormous,” Azari says. The rabbi balks at the idea of having a gun inside the synagogue during services.

“People come to synagogue looking for the peaceful energy of this place, and seeing a gun can take that feeling away,” he says. “Still, I might have to compromise someday. I don’t want to, but it may become necessary.”

Yet guns inside synagogues are already common sights elsewhere in the country, including in the community of Efrat.

“So as a result [of having guns] we are pretty well-covered,” says Barry Friedman, who is on the board of the Lev Efrat congregation. “But I’ve been here for 20 years and seen thing kind of thing before, as the Palestinians’ fanatical leadership incites their people to violence. We just have to remind ourselves that having our own country is a miracle, and we need to be strong and maintain a Jewish life and future here no matter who doesn’t want us here.”

Was the synagogue in Har Nof targeted simply because it is a synagogue? Rabbi Azari in Tel Aviv does not believe so. “It could have been a community center, school, or any place where many people congregate,” he says. “[Terrorists] choose places where many Jews are together and easy to kill.”

Gabie Sykora, a board member at the Kinor David synagogue in Ra’anana, disagrees.

“By attacking people in a synagogue, they attacked us where it hurts the most, literally at the heart of the Jewish people,” she says. Kinor David has had congregants taking guard shifts since the second intifada, and in the wake of the Har Nof attack is considering bolstering security further with an armed guard.

“We don’t want to have Jews needing to work on Shabbat, but when it comes to our congregants’ safety, it’s whatever it takes,” says Sykora. “Nothing else matters nearly as much.”