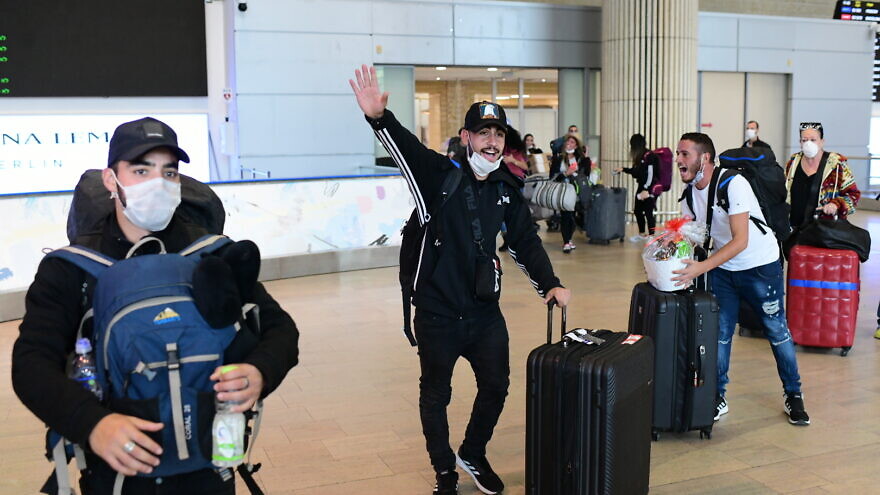 Israeli travelers who had been stranded in South America due to coronavirus travel restrictions arrive at Ben-Gurion International Airport from São Paolo through New York on March 23, 2020. Photo by Tomer Neuberg/Flash90.
Republish this article
694 WORDS
Spread the word.
Help JNS grow!
Share now:

(March 18, 2021 / Israel Hayom) Israel’s High Court of Justice excoriated the government on Wednesday over its handling of air travel during the coronavirus pandemic, ruling that the restrictions it imposed on entering and exiting the country were unconstitutional.

In their ruling, the justices nullified the government-imposed limit on the total number of Israelis allowed to enter the country by air each day. The 3,000-passenger limit will end on Saturday.

“It is unfortunate that we are now putting the encouraging morbidity figures at risk. The High Court decision is likely to bring Israel closer to a high wave of morbidity,” he said in a statement.

The panel of Chief Justice Esther Hayut and justices Neal Hendel and Yitzhak Amit assailed the government over the restrictions, saying, “In the future, any new travel restrictions into or out of Israel need, in legal terms, a comprehensive, factual, data-based foundation.”

As a whole, however, the government’s restrictions “violate the basic constitutional right to enter and exit Israel and other rights at the core of the democratic fabric of life,” the panel ruled.

The court added that “the threat of the coronavirus and its different variants isn’t expected to disappear in the foreseeable future, despite the success of the vaccination drive.” It called for a better balance between minimizing the threat of new strains entering the country and violating basic rights.

“The High Court is taking responsibility for the risk of mutations entering Israel. Good luck to us,” Kisch wrote on Twitter.

A senior Health Ministry official called the ruling “idiotic” and said that the judges “stabbed us in the back.”

“With all due respect, I don’t need a lecture on the level of the boy scouts to protect human rights. Even if we assume Israel’s entrance policy was extreme, the judges should have said they view this gravely and allotted a reasonable timeframe of several weeks to fix it. But when they give four days including the weekend—what kind of solutions can we provide? What can the government do?” the official asked.

The Israeli Association of Public Health Physicians, on the other hand, welcomed the court’s ruling.

“It’s a shame that instead of planning and implementing feasible solutions at Ben-Gurion Airport and the border crossings, the government issued illogical and impracticable directives, while creating problematic exceptions committees. This state of affairs hurt travelers and the health of the public. We hope that, in light of the High Court’s ruling, the government will implement the balanced professional solutions for prudent management of the border crossings,” the association said in a statement.

According to Channel 12 News, government officials were weighing the possibility of raising the number of Israelis allowed to enter per day to 6,000-8,000.

Officials have already held several meetings on the issue and Channel 12 said that the government could approve new restrictions that apparently would pass muster with the court.

Travelers looking to depart from Israel after March 20 will not need permission from the exceptions committee. The air-travel limits were due to expire on March 21, and the justices have now ruled that they will not be extended.

United Airlines said that it will resume regular service with 13 flights a week from Newark and San Francisco to Tel Aviv. Israeli airlines Israir, Arkia and El Al were also expected to announce the return of multiple routes, according to various media reports.

Meanwhile, the Knesset approved in second and third readings on Wednesday a law that will compel citizens returning from abroad to wear electronic bracelets for the duration of their self-quarantine at home.

According to the bill, those who do not wish to wear the electronic device will be able to quarantine in the so-called “coronavirus hotels.”

Children under the age of 14 and other special cases will be excluded from wearing the bracelet.