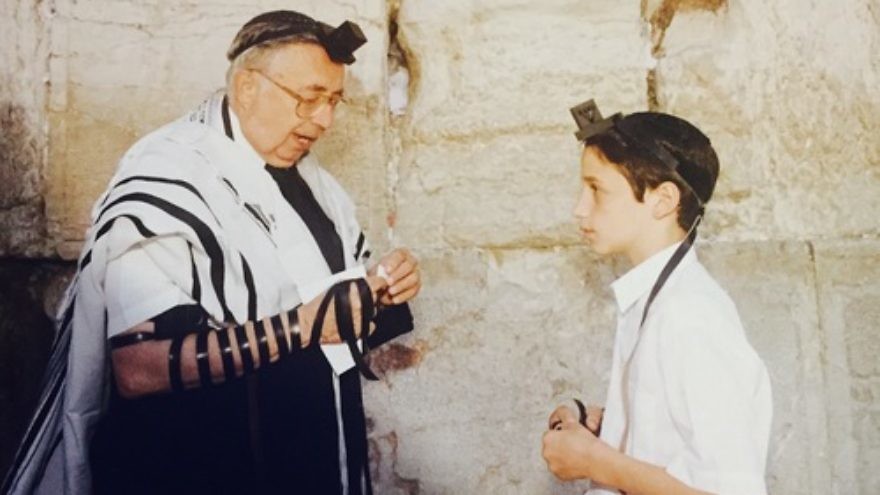 Rabbi Jay Karzen, coined the “Jerusalem bar mitzvah king” by The Jerusalem Post in 1997, has stories to make you laugh out loud or cry tears of joy.

Karzen, 81, has performed thousands of bar and bat mitzvahs (an average of 100 per year) over the last 30 years. He was among the first rabbis to offer formal bar/bat mitzvah services at the Kotel (Western Wall) for families coming from abroad to celebrate their special day.

Meeting with JNS.org is his posh Jerusalem home, Karzen says that when he made aliyah from Chicago 30 years ago, he needed a job. A then-prominent rabbi at the now-defunct Maine Township Jewish Congregation in Des Plaines, Ill., he had performed many Jewish lifecycle celebrations and figured a bar mitzvah business would be a good avenue to explore.

“Families would come and bring their groups to the Kotel, and I saw the ceremonies were sometimes un-meaningful. It was chaos. I figured I could upgrade the bar mitzvah experience,” says Karzen, who acknowledges that he started a trend that now has some steep competition.

Karzen’s philosophy is “to turn kids on, to inspire them.” He does this by explaining the importance of a relationship with God to his clients, who often do not lead a religiously observant lifestyle.

“I tell them that to be a Jew means to love God. To love God, you have to follow the Torah, which He gave us. I tell them it is fun to be a Jew,” Karzen says. “There’s a lot of singing.”

Some of the inspiration comes simply from being at the Kotel.

Karzen also performs bar/bat mitzvah ceremonies at Robinson’s Arch, Masada, and other sites around Israel. He was once asked to perform a bar mitzvah on the beach in Tel Aviv, but he turned down that request. Ultimately, he wrote a book about his experiences, “Off the Wall,” which was published in 1999.

During his recent meeting with JNS.org, Karzen was pleased to share a number of his best tales, such as the time a family asked if they could rent the entire Kotel because they were expecting several guests and wanted a private party.

“A South African family was among the first to book me for their bar mitzvah. In the process of printing invitations for their forthcoming event in Jerusalem, they faced me with a simple question: ‘What’s the address of the Kotel?’” Karzen recalls.

He assured the family that no address was really necessary, and that “Kotel” or “Western Wall” would suffice. But the family would not accept his answer. Karzen called various government offices from Jerusalem City Hall to the Ministry of Religion, all of which enjoyed a chuckle at his expense. Though they couldn’t give him an answer (because the Kotel indeed has no address), Karzen knew he could not get back to the family without a street number.

“So I composed an address: The Western Wall: 1 Kotel Plaza. Believe me, that is exactly what the invitation read,” he says with a laugh.

Then there was the boy who came with his tzitzit snipped from his tallit because his mother “didn’t want all those extra strings hanging down.”

One family asked the rabbi if they could order tefillin in a different color, maybe blue, because “black is so somber.”

An American mixed-marriage family contacted Karzen for a Thanksgiving day bar mitzvah. In their first correspondence, the mother proudly let the rabbi know that she had haredi family members in Israel who would be attending the ceremony. As such, they hired a top bar mitzvah tutor in the U.S. to prepare her son.

“During my meeting with them the night before the service, I discovered that the celebrant had learned the wrong Torah portion. That Thursday was Rosh Chodesh, the new Hebrew month. There is a special monthly reading on such days.…What was I to do?” says Karzen, who “told the family there would be two Torah readings that day—the regular weekly portion that the bar mitzvah bochur (lad) had learned, as well as a special reading in honor of the new Hebrew month.”

He called a member of the haredi family and explained the situation, asking him to pass the message to his relatives. The bar mitzvah boy never knew about the error, according to Karzen.

And even crazier emails. A sampling of messages that have graced Karzen’s inbox:

“Since we aren’t a very religious family, is it possible to have a ‘non-religious bar mitzvah?’”

“I will be brining my son to Israel next month with an organized tour program. We do not wish to miss anything from this comprehensive itinerary. I would like my son to have a symbolic bar mitzvah. If we come very early to the wall, can we back at the hotel to meet our tour group by 8 a.m.? P.S. My son does not know very much and cannot read Hebrew, so the service will have to be very short and simple. What do you charge for this type of abbreviated service?”

“We have many important participants coming to our son’s bar mitzvah.…We know that traditionally only three [aliyot to the Torah] are distributed on a weekday. We are requesting an exception to this rule.…I am sure that God will overlook these minor variations and bless you for your understanding in accommodating us.”

But Karzen says his successes make it all worth it. One time, a grandfather made arrangements for a bar mitzvah at the Kotel for his grandson, informing Karzen that while the father would be there, he was anti-religion and “hostile.” The ceremony started off with the father behaving just as described. Karzen couldn’t leave the father on the sidelines, so he tried to engage him in the ceremony. At the end of the event, the father stood up and told attendees how when he was 13, he was supposed to celebrate his bar mitzvah, but his grandfather died the night before his big day and the event was cancelled. He then learned a second Torah portion, only to have his grandmother die just before he was supposed to recite that one. The father had figured this was God’s way of telling him he didn’t need to have anything to do with Judaism. Yet after witnessing his son’s ceremony, the father was in tears and had changed his mind.

“He said that after seeing his son’s bar mitzvah, he realized how much he missed Judaism and how beautiful it is,” recalls Karzen. “He said he just wanted to hug me and thank me for reintroducing him to religion.”