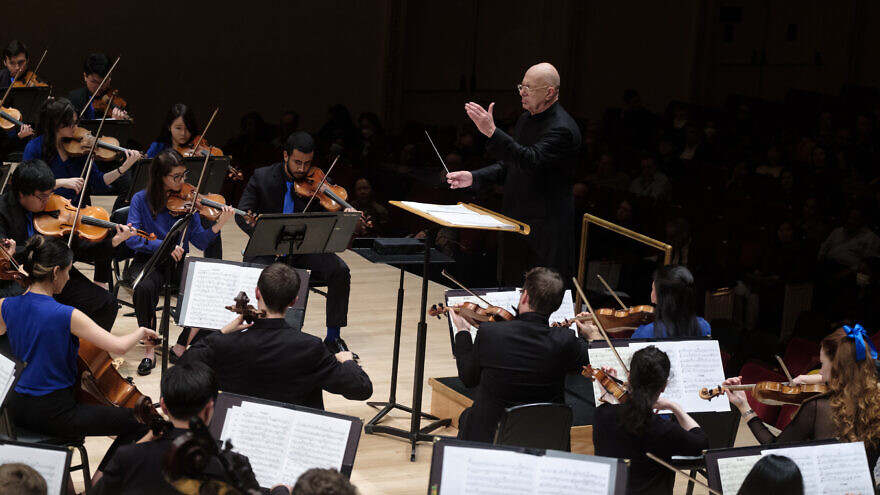 (November 11, 2022 / JNS) In 1938, composer Hugo Kauder stuffed two suitcases with some of his works and fled Vienna. A Jew, he knew he needed to get away from the Nazis.

“He also stuffed some in a bookcase, but I don’t know that those will ever be found,” his granddaughter Helen told JNS.

Kauder’s “Symphony No. 1” (1920-1921) was the last of four pieces performed at Carnegie Hall on November 10, as more than 60 musicians from The Orchestra Now delighted the crowd playing what was written a century ago.

Portions of the symphony showcased Kauder’s ability to evoke a demonic danger seemingly battling harmonious tranquility. The concert was one of a series celebrating Kauder and in participation with the YIVO Institute for Jewish Research.

“This is the kind of concert that will never happen again,” Botstein, who is the president of Bard College in suburban New York, told the crowd.

He explained to those in attendance that it was a “re-birth of this piece which was reconfigured in the last two years making it ready for performance” and added that this piece “catapulted Kauder to recognition in the circle of Viennese music and musicians.” Kauder, born in Austria-Hungary in 1888, lived since 1940 in New York City. He died in 1972.

For the event, titled “The Lost Generation,” the orchestra first played works of Walter Braunfels, who was part-Jewish, Adolf Busch, who was not Jewish but anti-Nazi, and Hans Erich Apostel, who was a political moderate.

Botstein noted that SS guards loved classical music and the three composers, with pieces written in 1944, 1948 and 1949, had to avoid falling into “the trap of speaking through the language if you will, of the oppressors.”

Kauder’s symphony has been performed only once before, on September 22, 1924, at the Theater and Music Festival of Vienna, performed by the Vienna Workers Orchestra and conducted by Leopold Reichwein.

“This concert is a reminder of how terrible things can become if we don’t do something about it,” Botstein said.

Oboist J.J. Silver told the audience that Barunfels’s “Sinfonia brevis” conveyed a “palpable sense of bitterness, out of rejection, out of forced obsolescence, out of exile.” Trumpet player Maggie Tsan-Jung said of the Kauder piece that she “felt a little bit clueless” because there were no recordings. She drew applause when she announced the orchestra recorded the piece that week.

Botstein told JNS the first three pieces project a “sense of loss and suffering and the residue of violence. It’s a reminder of the price one pays for tyranny and racial hatred and a violent effort to rid the world of your opponent.”

The Kauder piece reminds us that his career was interrupted as he had to flee his country and he never was able to have the career he thought he would, Botstein explained.

How is able to be such a force of nature at the age of 75?

“Age is a matter of attitude, not chronology alone,” Botstein told JNS. “I don’t think I was ever young. I live to work, I don’t work to live. My life would have little purpose without work. I intend to continue my work as a musician as long as I’m able to physically do so. I’m younger than the president of The United States.”

He came to the United States from Switzerland at the age of two. His parents, Polish-Jewish physicians Charles and Anne, lost many relatives who were murdered in the Holocaust.

Regarding Kauder, one may ask what took him so long to leave or how did he know to leave in time?

“He felt like his work was tied to the German language,” his granddaughter Helen told JNS. “He held out hope that there would be some gig for him. He deluded himself. Something must have happened to give him clarity and it was a scramble.”

She explained that he went to the Netherlands, editing poetry, then England, and eventually came to New York.

She said she will never forget the power of the concert.

“To experience the passion, he had to unleash an orchestra and it was incredible and they had two harps,” she said. “I was shaking my head in both amazement and sorrow.”

Alex Weiser, director of public programs for the YIVO Institute of Jewish Research, credited the Hugo Kauder Society for digitally transcribing the musical pieces and making them available.

“Kauder was slowed down, left his life behind and became a refugee, and it is a great to honor his legacy,” Weiser said. “I heard when his piece was first performed, it got a standing ovation.”