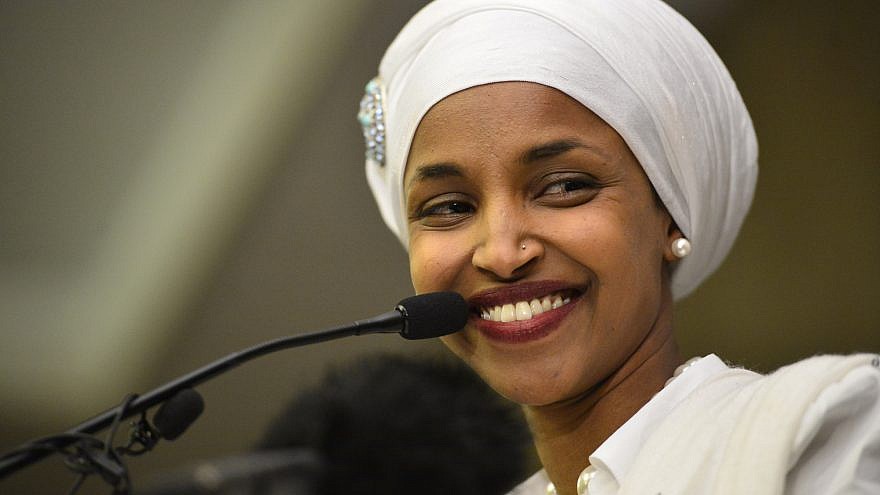 (June 11, 2021 / JNS) Despite widespread condemnation, Democrats in Congress are keeping quiet on whether remarks that appeared to equate the United States and Israel to the terrorist organizations Hamas and Taliban by progressive Rep. Ilhan Omar (D-Minn.) rise to the severity of removing her from her position on the House Foreign Affairs Committee.

Omar’s statements came on Monday via her Twitter account. They included a video of her asking U.S. Secretary of State Antony Blinken where victims of cases of crimes against humanity should seek justice if the United States does not recognize the jurisdiction of the International Criminal Court.

Her tweet first drew backlash from Republican members of Congress, who recalled Omar’s previous anti-Semitic statements—for which she apologized after being reprimanded by leadership—and began once again calling for Omar to be removed from her Foreign Affairs Committee seat.

Democrats chimed in on Wednesday, releasing a joint statement led by Rep. Brad Schneider (D-Ill.) and signed by 12 Jewish Democratic members of Congress, who called Omar’s statements “offensive and misguided.”

Despite their condemnation, the representatives made no mention of whether they believed that Omar should be relieved of her position on the Foreign Affairs Committee, a form of punishment that recently had been successfully applied against Rep. Marjorie Taylor Green (R-Ga.) earlier this year and former Iowa Republican Rep. Steve King in 2019.

On Thursday, JNS reached out to the offices of each of the Jewish members included in Schneider’s statement asking whether they think Omar should be removed from her committee appointment but received no response.

Minority Leader Kevin McCarthy (R-Calif.) called on Pelosi to act: “Rep. Omar’s anti-Semitic & anti-American comments are abhorrent. Speaker Pelosi’s continued failure to address the issues in her caucus sends a message to the world that Democrats are tolerant of anti-Semitism and sympathizing with terrorists. It’s time for the speaker to act.”

‘The conversation was about accountability for specific incidents’

Omar at first did not budge from her position, spending the day retweeting other progressive members of Congress, such as Reps. Rashida Tlaib (D-Mich.) and Cori Bush (D-Mo.), who defended her against the outrage from the Jewish Democrats.

Jeremy Slevin, a spokesman for Omar, told The Washington Post that Omar tried to reach out to those Democrats who signed the joint statement but her calls were unreturned.

Later in the day, Omar released a clarification.

“On Monday, I asked Secretary of State Antony Blinken about ongoing International Criminal Court investigations,” the statement read. “To be clear: The conversation was about accountability for specific incidents regarding those ICC cases, not a moral comparison between Hamas and the Taliban and the U.S. and Israel.

“I was in no way equating terrorist organizations with democratic countries with well-established judicial systems.”

“Legitimate criticism of the policies of both the United States and Israel is protected by the values of free speech and democratic debate. And indeed, such criticism is essential to the strength and health of our democracies,” the statement read. “But drawing false equivalencies between democracies like the U.S. and Israel, and groups that engage in terrorism like Hamas and the Taliban, foments prejudice and undermines progress toward a future of peace and security for all.”

“We welcome the clarification by Congresswoman Omar that there is no moral equivalency between the U.S. and Israel and Hamas and the Taliban,” they said.

Omar’s clarification, however, was not enough for Rep. Lee Zeldin (R-N.Y.), who early on called for her removal.

“Just how much more anti-American propaganda is Speaker Pelosi cool with before she finally holds Ilhan Omar to account?” Zeldin said in a tweet on Friday. “If Omar was a Republican, you can bet Pelosi would run Omar out of D.C. Total disgrace. Rep. Omar should be removed from [the House Foreign Affairs Committee] and some.”

Several other Republicans also called for her removal.

“She is a liability to that committee,” Rep. Nicole Malliotakis (R-N.Y.) said in a Friday afternoon appearance on Fox News.

Malliotakis, along with nine other GOP lawmakers, send a letter to Pelosi and Hoyer on Friday, saying that Omar’s rhetoric warrants formal disciplinary action, calling her remarks a “new low.”

“We write with a profound sense of concern in light of anti-American, anti-Semitic and bigoted statements made by our colleague, Representative Ilhan Omar,” they wrote.

“Given Representative Omar’s history of engaging in this type of conduct, House Democratic leadership must take immediate and meaningful action to remove her from the House Committee on Foreign Affairs. We consider anything less to be a form of complicity.”

Democratic strategist Steve Rabinowitz told JNS that while he personally would not have chosen Omar for the committee, Democrats are likely not calling for her removal because they believe that it’s simply not necessary. “The world is not just Israel and the Palestinians. Even the Middle East is more than Israel and the Palestinians. It’s a big Middle East, and it’s a huge world, and the Foreign Affairs Committee is not just about Israel,” he said.

At the same time, Democrats find themselves with a very narrow majority in the House with just an eight-seat advantage over Republicans; any move to punish Omar could cause a greater backlash by progressives against the leadership in the House, imperiling Pelosi’s agenda.

“You know, you got to do some egregious [stuff] to be taken off of a committee,” he said. “And I think what you got to do is more than just say unacceptable stuff. You got to do and say really, really despicable [stuff].”