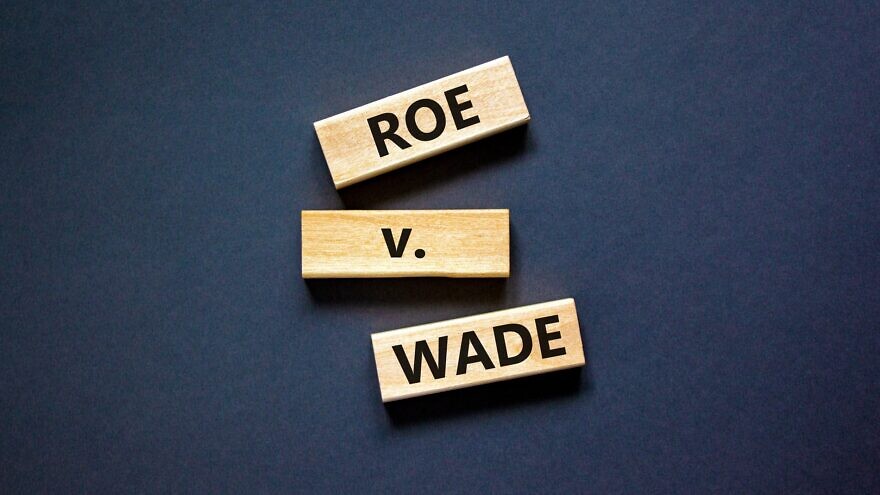 (June 24, 2022 / JNS) The U.S. Supreme Court’s long-awaited decision on Friday morning to overturn Roe v. Wade, a landmark 1973 ruling on abortion rights, has rocked the nation. The news was met with both relief and shock, depending on which side of the issue Americans stood. For the most part, Jewish organizations felt angered at what they believe is a civil right being taken away, while those with a conservative bent focused on what they believe is the right to life.

More than a month after a draft opinion on the case was leaked, the U.S. Supreme Court officially released its decision in the Dobbs v. Jackson Women’s Health Organization, overturning the longstanding Roe v. Wade ruling that guaranteed the right to an abortion at the federal level.

In a 6-3 ruling, Justice Samuel Alito wrote in his majority opinion that the 1973 Roe v. Wade decision was “egregiously wrong from the start,” as well as a 1992 decision in Planned Parenthood v. Casey that affirmed that right.

“We hold that Roe and Casey must be overruled,” wrote Alito. “It is time to heed the Constitution and return the issue of abortion to the people’s elected representatives.”

Chief Justice John Roberts concurred with the decision, but wrote a separate opinion, saying that he would have “taken a more measured course.”

While he agreed that the viability line established by Roe should have been discarded, he argued that this would have been the time to practice “judicial restraint.”

“Surely, we should adhere closely to principles of judicial restraint here, where the broader path the court chooses entails repudiating a constitutional right we have not only previously recognized, but also expressly reaffirmed applying the doctrine of stare decisis,” he continued. “The court’s opinion is thoughtful and thorough, but those virtues cannot compensate for the fact that its dramatic and consequential ruling is unnecessary to decide the case before us.”

Justices Stephen Breyer, Sonia Sotomayor and Elena Kagan joined in their dissent, writing that Roe and Casey reaffirmed a woman’s right whether or not to have a child in the first stages of her pregnancy. “The government could not control a woman’s body or the course of a woman’s life: It could not determine what the woman’s future would be,” they wrote.

“Today, the court discards that balance. It says that from the very moment of fertilization, a woman has no rights to speak of,” wrote the justices. “A state can force her to bring a pregnancy to term, even at the steepest personal and familial costs. An abortion restriction, the majority holds, is permissible whenever rational, the lowest level of scrutiny known to the law.

‘Value on choosing life and mandates’

Jewish groups came out in full force regarding the decision, with clear opinions on both sides of the issue.

Agudath Israel of America welcomed the ruling, calling it a “historic development” in a statement.

“Agudath Israel has long been on record as opposing Roe v. Wade’s legalization of abortion on demand,” the statement read. “Informed by the teaching of Jewish law that fetal life is entitled to significant protection—with termination of pregnancy authorized only under certain extraordinary circumstances—we are deeply troubled by the staggering number of pregnancies in the United States that end in abortion.”

The organization added that it does not “seek to impose our religious beliefs on the broader American society, “but states that it believes “that society, through its laws, should promote a social ethic that affirms the supreme value of life. Allowing abortion on demand, in contrast, promotes a social ethic that devalues life.”

“We pray that today’s ruling will inspire all Americans to appreciate the moral magnitude of the abortion issue and to embrace a culture that celebrates life,” the statement concluded.

The Orthodox Union reiterated its position when the draft was leaked by saying that the organization could neither celebrate nor mourn the decision, as it could not support an absolute ban on abortion at any time during the pregnancy for lifesaving situations nor support legislation that doesn’t limit abortion to situations where carrying a pregnancy to term would risk the life of the mother.

“Jewish law places paramount value on choosing life and mandates—not as a right but as a responsibility—safeguarding our own lives and the lives of others by behaving in a healthy and secure manner, doing everything in our power to save lives, and refraining from endangering others. This concern for even potential life extends to the unborn fetus and to the terminally ill,” the OU said in its news release. “The ‘right to choose’ (as well as the ‘right to die’) [is] thus completely at odds with our religious and halachic values. Legislation and court rulings that enshrine such rights concern us deeply on a societal level.”

Still, that same mandate also requires concern for the mother, it explained, which Jewish law prioritizes over that of a fetus when it endangers the mother’s life, and “an abortion may be authorized, if not mandated by halachah and should be available to all women irrespective of their economic status.”

“Legislation and court rulings, federally or in any state, that absolutely ban abortion without regard for the health of the mother would literally limit our ability to live our lives in accordance with our responsibility to preserve life,” wrote the OU. “The extreme polarization around and politicization of the abortion issue does not bode well for a much-needed nuanced result. Human life—the value of everyone created in the Divine Image—is far too important.”

The Coalition for Jewish Values welcomed the ruling, stating that Judaism regards all life as sacred.

“Jewish law permits abortion only in truly extraordinary circumstances. This does not describe the situation in America today, where the overwhelming majority of abortions are done as an elective procedure,” CJV wrote in a news release. “The dialogue needs to change: If everything is a human right, then in the end, nothing remains worthy of special protection. We must return to a society that cherishes human rights and human life.”

‘Rights of woman ahead of rights of fetus’

In a statement, Jewish Council for Public Affairs said it is “outraged by this decision,” adding that it does not “represent the will of the people nor is in the best interest of the country.”

“Prohibiting abortion access is contrary to Jewish law, traditions, and our principal value of saving a life; it enshrines specific religious imperatives in American law,” said JCPA. “Judaism compels us to stand for all life, and we prioritize the life and health of a pregnant person. While we treat a fetus with great significance; it does not merit the status of a person until the moment of birth and then it has equal status with the person giving birth.”

The statement added that “Jewish law supports abortion of a fetus up until the moment of birth.”

While the Union of Orthodox Jewish Congregations of America is a member of JCPA, it did not join in on the statement, claiming that it cannot “endorse a public policy that does not reflect the complex response of halachah to the abortion issue. In most circumstances, the halachah proscribes abortion, but there are cases in which halachah permits and indeed mandates abortion.”

Hadassah president Rhoda Smolow and CEO Naomi Adler called the decision an “attack on American women and their rights to health care, privacy and autonomy.” They emphasized that their organization will “continue to fight for federal and state legislation affirming and protecting reproductive rights.”

“This decision is a horrific violation of human and civil rights,” they said, “and will cause immeasurable harm to millions who have just lost access to safe and legal health care. We grieve, but we are not giving up.”

The National Coalition of Jewish Women called the decision a “horrific violation of human and civil rights,” adding that it “will cause immeasurable harm to millions who have just lost access to safe and legal health care.”

Bend the Arc: Jewish Action joined the condemnations accusing the Supreme Court of being “determined to enforce their extreme, unpopular and dangerous views over the will of the people.”

The Conservative Judaism movement’s Rabbinical Assembly said in a news release that it was outraged by the decision, calling it the most extreme case of government overreach in their lifetimes.

“Many Americans now face a dire crisis. Many more face uncertainty. This is a dangerous time for all people who are capable of becoming pregnant, especially those in categories who have poorer maternal outcomes, and particularly BIPOC (Black, Indigenous, People of Color) people or those of lower socioeconomic backgrounds,” said the RA.

“Based on our understanding of Jewish tradition and religious freedom, the RA supports the right to full access for all those who need abortions to the entire spectrum of reproductive healthcare and strongly opposes all efforts by governmental, private entities, or individuals to limit or dismantle such access,” continued the RA. “Denying individuals access to the complete spectrum of reproductive health care, including contraception, abortion-inducing devices and medications, and abortions, among others, on religious grounds, deprives those who need medical care of their Constitutional right to religious freedom.”

The Central Conference of American Rabbis (CCAR), which represents rabbis from Reform Judaism, slammed the decision and called on Congress to pass a federal law to guarantee the right. The group affirmed that it will continue to support its members who will be in need of abortion care and continue fighting state laws to restrict abortion. It also said that it would support its rabbis who will choose to “participate in civil disobedience if necessary to save the lives of and ensure access to health care for pregnant people.”

“At this terrifying moment in American history for all people who can become pregnant and for all who love them,” concluded CCAR, “Reform rabbis stand ready to comfort the afflicted and to act on behalf of all who need any kind of reproductive health care, including abortion care.”