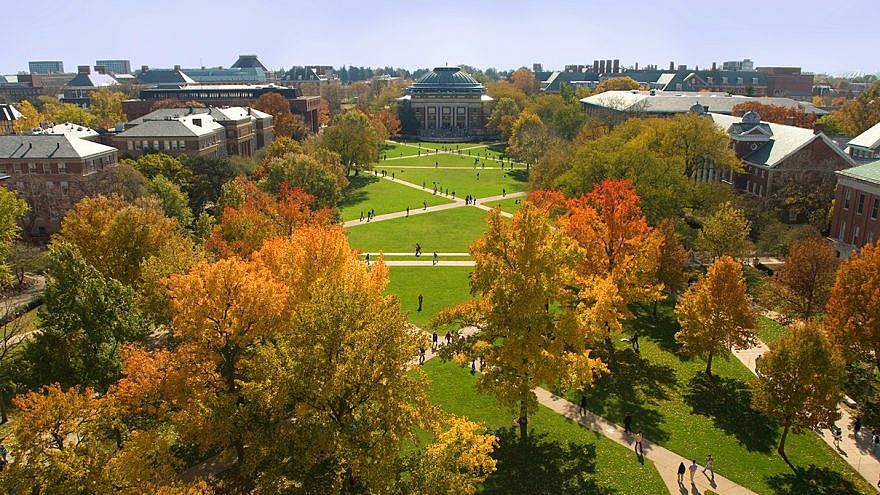 (October 23, 2020 / JNS) Jewish students at the University of Illinois at Urbana-Champaign (UIUC) announced on Friday their filing of a complaint with the U.S. Department of Education’s Office for Civil Rights, submitted on behalf of Jewish students and alleging that the school has allowed a hostile environment to proliferate on its campus in violation of Title VI of the Civil Rights Act of 1964.

Filed months ago in accordance with the December 2019 executive order on combating anti-Semitism, the complaint outlines how Jewish and pro-Israel UIUC students have been subjected to an alarming increase in anti-Semitism and anti-Zionism over the past five years. It details the existence of numerous swastikas been found on UIUC’s campus, Jewish ritual items such as menorahs and mezuzahs having been vandalized, and windows of Jewish fraternity houses smashed by bricks. Many of these incidents were reported in the media.

It also describes how members and supporters of the UIUC chapter of Students for Justice in Palestine publicly glorify members of U.S. government-designated terrorist organizations, harass UIUC Jewish and pro-Israel students with epithets like “Nazi” and “white supremacist,” advocate the expulsion of Zionists from campus, and have converted mandatory UIUC diversity training into anti-Israel indoctrination.

“The circumstances at the University of Illinois are unfortunate,” Rep. Brad Schneider (D-Ill.) told JNS. “I believe every student should stand [up], and every institution should be comfortable in their identity and their faith, in their passions and connections—whether it’s Jewish and a love for Israel or anything else. And unfortunately, we’ve seen anti-Semitism rising across the country in many places, but in particular, on our college campuses. And the record of the University of Illinois, in particular.”

Schneider called on UIUC to take “a more aggressive stance to address the anti-Semitism” and to “make sure every student is comfortable” on campus.

The complaint was prepared with assistance from the Louis D. Brandeis Center for Human Rights Under Law, in consultation with the Jewish United Fund and Hillel International.

“Jewish students at UIUC have been targeted for years,” said Alyza D. Lewin, president of the Louis D. Brandeis Center for Human Rights Under Law. “We gave UIUC seven months since the complaint was filed to address the ongoing harassment. In the face of continuous stall tactics and almost no action from the university, we decided to publicize our efforts.  We hope public awareness of this dire situation will prompt the university to finally acknowledge and address the egregious anti-Semitic harassment it has swept under the rug for far too long.”

‘Being a Jew comes with immense hate and hostility’

The complaint alleges that, despite repeatedly being placed on notice of the developing hostile environment on campus, the administration has failed to take necessary measures to provide Jewish and pro-Israel students with a discrimination-free academic setting. This failure to act when Jews are harassed because of their identity or belief in Israel as the Jewish homeland stands in marked contrast to vigorous steps the university has taken in the face of discrimination or harassment aimed at other groups, it said.

“Being a Jew at UIUC comes with immense hate and hostility,” said student Ian Katsnelson in a statement. “First, as a senator on student government, I’ve experienced shocking examples of anti-Semitism firsthand. I’ve been called a genocide supporter, a white supremacist and harassed; all for being publicly Jewish. And all of this in front of the administration—who did nothing. Second, as a student, I’ve seen the effect that the hostility has on my friends; they’re afraid to wear Jewish stars, Hebrew writing or even Jewish Greek letters. This is my third year, and I can tell you … it’s exhausting.”

In some instances, as described in the complaint, university employees have been complicit in fostering a hostile environment. They include peer advisers who organized a presentation at a mandatory staff development meeting in September 2019 declaring Zionism to be a form of racism and a vice chancellor who openly admitted that she removed a Jewish student from the UIUC Campus Student Elections Commission because “she’s Jewish.”

Lewin explained that “since it’s common for the perpetrators of the anti-Semitism on campus to attempt to hide behind the First Amendment, it’s critical we be perfectly clear: The purpose of this complaint is not to ‘shut down’ anyone’s speech. To the contrary, its goal is to protect Jewish pro-Israel students at UIUC who are being discriminated against, harassed and excluded on the basis of their identity—behaviors not protected under the First Amendment—and to ensure that they can participate in campus life on an equal basis with other students.”