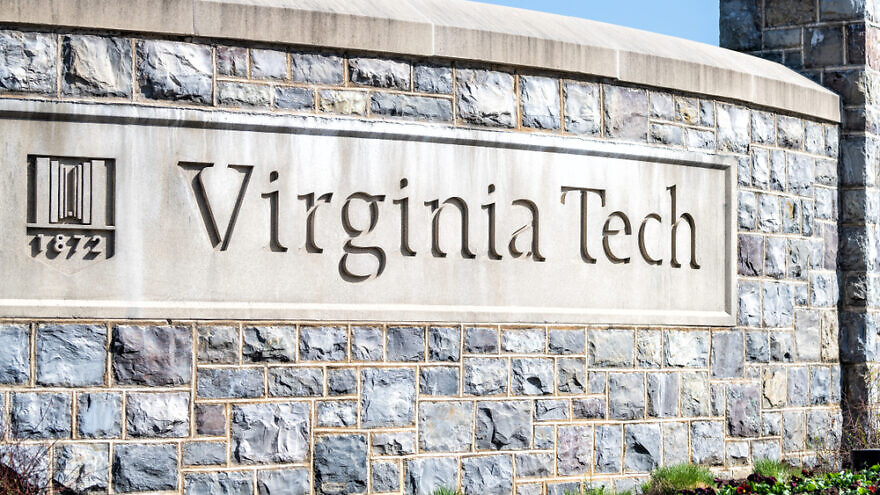 (March 22, 2022 / JNS) Jewish students are demanding that the administration of Virginia Tech cancel a March 23 speech by a known anti-Semitic and anti-Zionist speaker.

Steven Salaita, a former professor at the University of Illinois and the Said Chair of American Studies at the American University of Beirut, is scheduled to be the keynote speaker at the 2022 Graduate and Professional Student Senate Research Symposium (GPSS).

According to Canary Mission, which tracks anti-Semitic and anti-Zionist activities online, Salaita was removed from his tenured position at Illinois in 2014 after a series of anti-Semitic tweets were discovered. One of them, posted after three Jewish teenage boys were kidnapped and brutally murdered that year by Hamas, read: “You may be too refined to say it, but I’m not: I wish all the f***ing West Bank settlers would go missing.”

Briana Schwam, president emeritus of Hillel at Virginia Tech and a GPSS senator, first learned about plans to bring in Salaita earlier this month once everything was already signed.

“Steven Salaita does not promote respectful or healthy dialogue,” she told JNS. “[His] public statements threaten my identity as a student because he promotes hate and violence towards individuals who share my identity or who do not share his exact perspective.”

Schwam and fellow GPSS senator Amir Gazar, who have started a petition to get the school to intervene, claim that the student senate executive board has been unwilling to listen to those who, in Schwam’s words, “disagree with their decisions or have a different point of view.

“Last semester, some Jewish students and Jewish alumni were blocked from the GPSS public Instagram account. The GPSS exec also deleted their comments,” said Schwam. “This action is a clear example that the GPSS exec will not converse with or listen to any individuals with different perspectives.”

‘Contrary to the principles of community’

Liora Rez, executive director of StopAntiSemitism.org, has been in contact with university leaders.

In a letter to Rez, Tracy Vosburgh, the senior associate vice president for university relations, said: “Our Principles of Community reject all forms of prejudice and discrimination and value human diversity, yet it also recognizes the importance of free expression. At moments like this, we support open expression within a climate of civility and mutual respect and strive to create an open and inclusive environment where all individuals feel safe and respected.”

But that’s the opposite of what allowing Salaita to speak will do, say Gazar and Schwam.

“Our goal as members of the graduate and professional student body here at Virginia Tech is to show the administration and graduate students at VT that we stand up for diversity and inclusion,” he continued. “In addition, we believe that everyone should have the right to free expression. However, we cannot stand by passively when the money of our graduate students is diverted to fund hate speech against minorities.”

Gazar said this is not the first time that the student senate has acted against the interest of pro-Israel and Jewish students. He noted they passed a BDS measure last semester creating a “hostile climate on our campus, especially for Jewish graduate students.”

Schwam agrees, saying it’s time for the administration to step in and take action.

“There have been numerous acts of anti-Semitism on campus in the past year, as recent as last month,” she said. “Students, myself included, are in need of support from the Virginia Tech administration. Hate should not be allowed on campus, and Virginia Tech must address it because it is affecting the campus climate and students feel unsafe.”