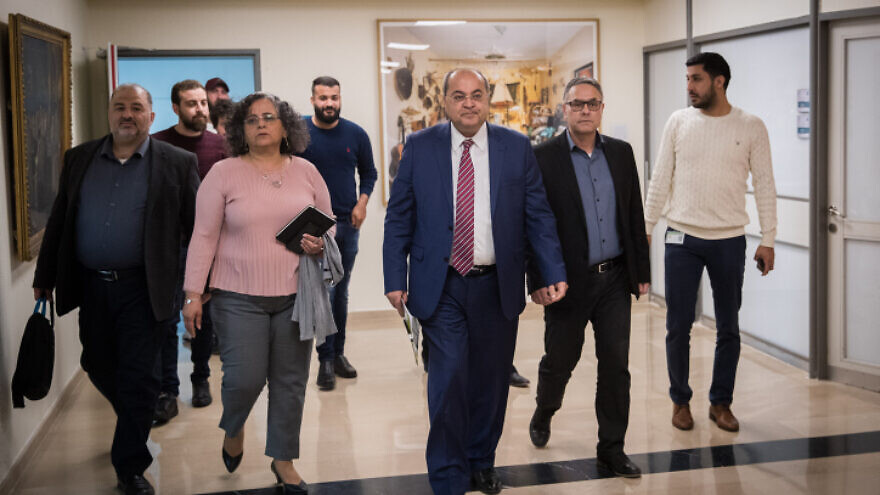 Joint Arab List leader Ahmad Tibi arrives at the Knesset in Jerusalem for talks with representatives of the Blue and White Party, on March 11, 2020. Photo by Yonatan Sindel/Flash90.
Spread the word.
Help JNS grow!
Share now:

(March 26, 2020 / Israel Hayom) Israel’s Joint Arab List was assigned on Tuesday the interim Knesset Labor, Welfare and Health Committee, the responsibilities of which include a number of security-related matters pertaining to the handling of wounded Israel Defense Forces’ veterans and victims of terrorism.

The decision to establish the temporary committee was made overnight on Monday by the Knesset Arrangements Committee, which is chaired by Knesset member Avi Nissenkorn of the Blue and White Party.

In recent years, the committee, in its permanent configuration, has overseen the regulation of compensation for wounded Israeli soldiers and veterans, as well as medical and income benefits for soldiers, members of the Israel Police and the Israel Prison Service. The committee also oversees pension funds and savings plans for government institutions into which the pension funds of everyone who serves in the IDF and Israel’s other security branches is deposited.

The committee also has the authority to revoke the National Insurance benefits and other stipends of convicted terrorists and their families.

Israeli Prime Minister Benjamin Netanyahu called the decision to entrust the work of the committee to representatives of the Joint List a “disgrace.”

Several Joint List Knesset members have in the past publicly voiced support for terrorists.

Blue and White officials dismissed these concerns as a tempest in a teacup, and said that the temporary committee would only operate until a government was formed and would only handle urgent matters, particularly pertaining to the effects of the coronavirus crisis on the workforce and Israel’s weaker socio-economic sectors.

According to Blue and White, the temporary committee would not be advancing amendments to any legislation.