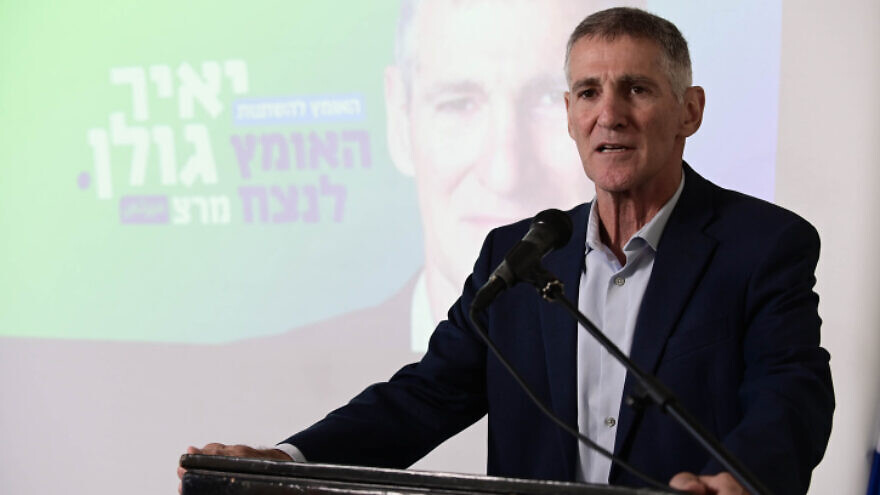 Israel's Deputy Economy Minister Yair Golan speaks during a press conference in Tel Aviv, where he announced his intention to run for the leadership of the Meretz Party in the upcoming Meretz primaries, on July 6, 2022 in Tel Aviv. Photo by Tomer Neuberg/Flash90.
Spread the word.
Help JNS grow!
Share now:

(July 7, 2022 / Israel Hayom) Israeli Deputy Economy Minister Yair Golan announced on Wednesday that he plans to challenge Nitzan Horowitz for the leadership of the Meretz Party in the next primaries.

The left-wing party plans to hold primaries in the coming weeks, ahead of the Nov. 1 elections, but has yet to announce the date on which its internal vote will take place.

Golan, a retired general who in his last military role served as deputy chief of staff of the Israel Defense Forces, told reporters that he seeks to head the party with the aim of “fighting the messianic and corrupt right. I am appalled by Jews who are full of hatred and religious fanaticism and who beat Arabs just because they are Arabs.”

As for a potential joint Knesset bid with the Labor party—a notion so far discounted by both Horowitz and Labor leader Merav Michaeli—Golan said, “I haven’t abandoned the idea of a wide left-wing camp.”