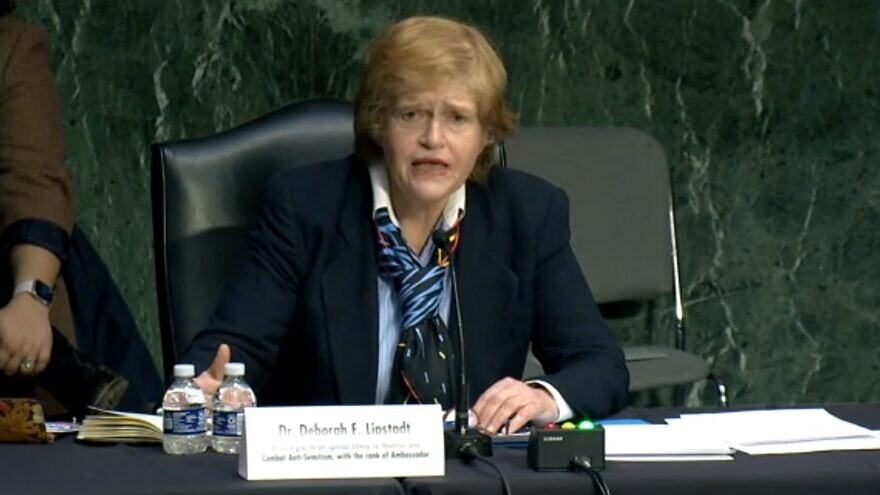 (March 9, 2022 / JNS) The confirmation vote for Deborah Lipstadt to serve as the Special Envoy to Monitor and Combat Antisemitism was delayed on Tuesday after Sen. Ron Johnson (R-Wis.) objected to her nomination.

The Senate Foreign Relations Committee, which approved 11 nominations at its March 8 meeting, postponed Lipstadt’s nomination, as well as that of Barbara Leaf to serve as assistant secretary of State for Near Eastern Affairs.

Despite the delay, Lipstadt’s confirmation is expected to be approved at the committee’s next hearing.

Sen. Bob Menendez (D-N.J.), chairman of the Foreign Relations Committee, said in a statement that approving these nominees is critical.

“At a time when the United States and its allies are working to put every conceivable pressure on [Russian President Vladimir] Putin to stop his unprovoked brutal and illegal war against Ukraine, we have to have these nominees in place,” he said.

“This game is costing us,” continued the senator. “For all of my friends who love to wave the flag of how important it is to be leading the rest of the world and how forward-looking we should be—you’re not helping the cause. You don’t like a candidate? Vote against them. But this process of just holding and holding and holding makes no sense whatsoever.”

Johnson said he objected to her confirmation over a past tweet by Lipstadt that labeled one of his statements as “white supremacy.”

During her confirmation hearing in early February, Lipstadt apologized to the senator, saying, “While I may disagree with what you said specifically—and I think that’s a legitimate difference—I certainly did not mean it, and I’m sorry if it was taken and I’m sorry if I made it in a way that it could be assumed to be political.”