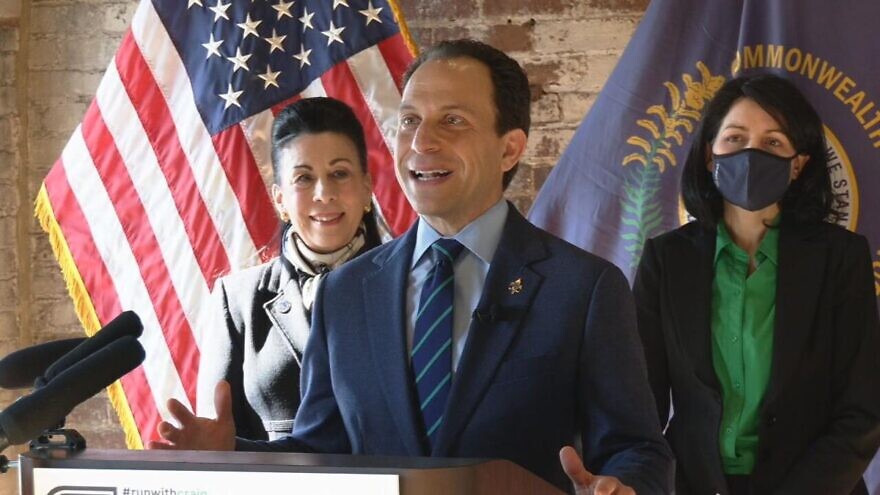 (February 16, 2022 / JNS) Craig Greenberg, a Democratic mayoral candidate in Louisville, Ky., who was the target of an attempted shooting on Monday, says he was “blessed” and more determined than ever to combat crime in his city.

“It’s still surreal, still raw. My ears are still ringing from the shots that were fired in my office at me,” he tells JNS. “I’m really focused on the safety of my team and my family, their mental well-being as we move forward. But I also feel with this experience, I have to be more committed than ever to bringing people together to address the violent crime crises that we have in Louisville.”

Later on Monday morning, the Louisville Metro Police Department identified 22-year-old Quintez Brown as entering Greenberg’s office. Staff who were gathering for a meeting greeted Brown, who then allegedly stood in the doorway and fired multiple times at the candidate. The bullets missed Greenberg, but at least one tore through his shirt. A staffer managed to get the door closed, and Brown fled. He was found and arrested just a few blocks away.

Brown declared himself a candidate for city council in December and is being described in local media as a “community advocate.” He was a former intern at Louisville’s The Courier Journal newspaper and has written several op-ed pieces for them over the years. He has been charged with attempted murder and four counts of wanton endangerment. Police have not released a motive yet.

A spokesperson for Greenberg says he does not know Brown.

Noting that nearly 200 people in Louisville were killed in gun violence and hundreds more injured in 2021, Greenberg says “there is too much gun violence, and if there is if I only accomplish one thing as mayor, I hope it will be bringing our city together to end [it]. We should have a goal of no gun violence in Louisville.”

“I was blessed that I was not injured,” he adds. “I need to take that blessing and be part of the solution, bringing people together towards that goal.”

Born in New York City, Greenberg moved to Louisville when he was in second grade. A former board member of the Jewish Community Center in Louisville and a local synagogue member, Greenberg says Judaism plays a “very important part of my life and my family’s life.”

“Before I decided to run for mayor, when I was thinking about my next chapter in life, I kept coming back to tikkun olam and that simple but powerful concept of repairing the world. That’s a concept that I remember learning about as a child, and that my wife, Rachel, and I have tried to instill in our two boys every day,” says Greenberg, the father of two teenagers.

The day before the shooting, Greenberg attended a local church service and then headed to a Project Friendship event to help the homeless, hosted by Chabad of Kentucky.

“I’ve gotten to know a lot of faith leaders from across the entire city from all religions, and through my conversations with other faith leaders, I am more convinced than ever that all of us, regardless of religion, have shared values, shared goals and shared aspirations,” he says, “and we should focus on those shared values to make our neighborhoods and cities safer stronger and healthier.”