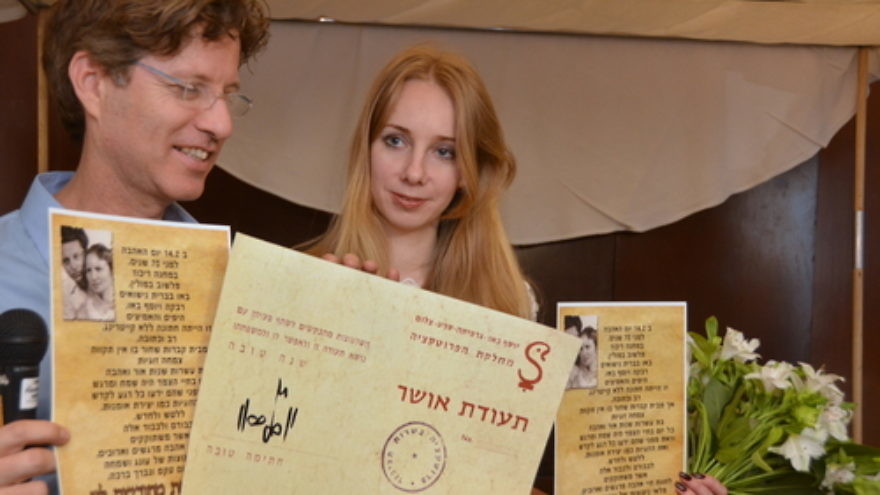 Boaz Bau-Simon, the grandson of Joseph and Rebecca Bau, with his fiancé Or (Irena) Gatina in February 2014. The couple announced its engagement at the ceremony commemorating the 70th wedding anniversary of Bau-Simon's grandparents. Bau-Simon and Gatina are pictured holding a "teudat osher" ("certificate of happiness") originally created by Joseph Bau as well as a letter relating the story of the lifelong romance of Joseph and Rebecca Bau. Credit: Maxine Dovere.
Republish this article
1358 WORDS
Spread the word.
Help JNS grow!
Share now:

(March 19, 2014 / JNS) In stark contrast to the many somber memorials that recall the tragedies of the Holocaust, the Tel Aviv-based Joseph Bau Museum this year is celebrating an anniversary that symbolizes life, love, and the joy of the human spirit: the 70th anniversary of the marriage of Joseph and Rebecca Bau.

This year also marks the 40th anniversary of the death of famed righteous gentile Oskar Schindler. Steven Spielberg’s 1993 film, “Schindler’s List,” includes a portrayal of the secret wedding of Joseph Bau and Rebecca Tennenbaum in the Plaszow concentration camp.

“They appreciated every minute of their lives and considered each moment to be a miracle,” said the couple’s daughter, Hadasa Bau. “A happy man and a happy woman are the biggest treasures on earth.”

Hadasa and her sister, Clila Bau, are co-directors of the Joseph Bau Museum. To celebrate the love and the spirit that characterized the relationship of Joseph and Rebecca Bau, the museum held a two-day celebration in February, with more than 400 people gathering at Tel Aviv’s Cinemateque for an evening of humor, music, and memory. A “blind date” after-party, at which guests wore masks portraying Joseph and Rebecca Bau, attracted about 1,000 people of all ages.

Early in the morning of Feb. 14, almost 100 people commemorated the Baus’ lives with a memorial at Nahalat Yitzhak Cemetery in Giv’atayim, near Tel Aviv, where the couple is buried.

“According to Jewish tradition, in times of deep desperation, a wedding ceremony would be held in the cemetery, symbolically linking the living and the dead,” Clila Bau told JNS.org. “The bride and groom, who had to be orphans, would stand among the dead to ask for rachmanut (mercy) from God, both for themselves and their community. They sought a promise from God, the ultimate matchmaker, for continued life.”

“Our parents were that bride and groom,” said Hadasa Bau. “We [created] this symbolic wedding so that Israel, our country, will always have love.”

Polish Ambassador to Israel Jacek Chodorowicz and Giv’atayim Mayor Ron Konick were keynote speakers at the ceremony, held at the cemetery’s Holocaust Memorial Plaza. Following the ceremony, which included the laying of messaged stones at the Baus’ graveside, the commemoration continued with a re-enactment of a “black wedding,” performed by students of the Haderach Theater School at the Giv’atayim Community Center.

“The Germans wanted all the Jews dead. The Plaszow concentration camp was in fact built on what had been a cemetery. It was a place of death. Joseph and Rebecca Bau had a love that shined even in the face of death, a love that saved the Jewish world,” Clila Bau said.

Hadasa and Clila Bau narrated the dramatization of their parents’ wedding. Monica Chodorowicz, wife of the Polish ambassador to Israel, read translations of the love poems written by Bau in the concentration camp. Polish actress Baeta Nowak, who portrayed Rebecca Bau in “Schindler’s List,” traveled from Poland for the commemorative events. She told JNS.org that being part of the film was a life-changing experience.

“Many in Poland thought the Holocaust was just a story. Meeting Joseph and Rebecca Bau gave me an understanding of the reality that few people in Poland understood,” Nowak said.

The two-day celebration concluded with a symbolic wedding, including the presentation of a ketubah for happiness, rather than the usual terms of the Jewish marriage contract. Nine couples—totaling 18 or “chai” people, the Hebrew number representing life—each received a “teudat osher” (“passport to happiness”) that was created by Joseph Bau, who was an artist.

“The greatest wealth is love and kisses,” Hadasa Bau said.

During the event on Feb. 13, Boaz Bau-Limon, grandson of Joseph and Rebecca Bau, announced his engagement. Boaz and Or, his fiancée, participated in the symbolic marriage held on his grandparents’ anniversary. The symbolic wedding was filmed by CNN and broadcast worldwide as part of the network’s Valentine’s Day programming.

“Joseph and Rebecca Bau symbolized a message of love,” Hadasa Bau said. “Be happy, never be too busy to be happy.”

Joseph Bau was a prolific artist. As a student, he learned German Gothic-style lettering, a skill that proved key to his survival. During the Holocaust, he created documentation that enabled hundreds of Jews to escape the Nazis. Later, when asked why he, the man who could make passports and documents for anyone, did not create them for himself, he responded, “If I make documents for myself, who would help the others?”

The Nazis prohibited weddings, even among Poles. If a bride and groom were discovered, the entire wedding party would be arrested and murdered as a warning to not even think about love.

“Yet, even in the camps, my parents defied that edict,” Clila Bau said. “There, a man and woman were forbidden to touch, let alone kiss. If caught by the Germans, a kiss of love could become the kiss of death.”

The couple met on a cloudy day when Joseph was ordered to create a sun-exposed blueprint for Amon Goeth, the concentration camp’s commandant. Rebecca, who was fluent in German and had skills as a manicurist, was Goeth’s secretary. “Perhaps you can be my sun,” Joseph flirted, bringing a moment of laughter. After knowing Rebecca a little more than two months, Joseph smuggled himself into the women’s section of the camp, where his mother blessed and married the couple.

Following the liberation of Plaszow, Joseph searched for Rebecca, who had been transferred to Auschwitz. Soon after they found each another and renewed their vows— this time with a rabbinical blessing—two years to the day that the Plaszow wedding took place. When they attempted to register their Feb. 13 marriage at the Krakow City Hall in Poland, a clerk responded, “Who does a wedding on the 13th? It’s bad luck.”

But for the Baus, who were married in Rebecca’s bunk No. 13, that number had positive connotations. Only when they gathered their documents to immigrate to Israel did they learn the official date of their post-war marriage was listed as Feb. 14—appropriately, Valentine’s Day.

In 1950, the Baus made aliyah with Hadasa, who was 3 years old at the time. Joseph worked at the Brandwein Institute in Haifa until 1956, when the family moved to Tel Aviv. He opened his studio the same year, furnishing it with his original desk, retrieved from the remnants of his Krakow home.

For more than 40 years, Joseph created some of Israel’s most widely known—and some of its most secret—graphic works. Bau drew the documents used by Eli Cohen, the famed Israeli spy who was executed in Syria. He was the creator of the documentation used by the Israeli team that captured Adolf Eichmann.

“[Joseph Bau] was a man who helped where needed,” said Doron Pollack, who was the curator of a recent retrospective on the artist’s work at the Dvora Fischer Gallery of the Zionist Organization of America House in Tel Aviv. “The Bau Museum is one of the most important small museums in the world.”

Bau produced works in the graphic arts, literature, poetry, painting, and animation. He created the titling for many of the Israeli movies produced during the 1950s, ’60s, and ’70s. He added a unique component of finely tuned, if somewhat dark, humor to each modality. His research and art of the Hebrew language reflected his inherently optimistic view of life. Through his art, he also portrayed the brutal reality of life during the Holocaust. Sotheby’s auction house has described his paintings and drawings as “significant contributions to the art of the Holocaust.” Bau was also the first Israeli artist to be exhibited in the galleries of the United Nations and the Cortes Generales (Spanish parliament).

Following the artist’s death in 2002, his studio was reborn as the Joseph Bau Museum. His original animated movies, the equipment he built, and his paintings and graphic art are all on permanent display there.

“He was a man thoroughly integrated into the currency of life—he created in any situation,” said Clila Bau. “My father refused to be haunted or controlled by his experience of the horrors of the Holocaust.”